The uneasy coalition that coalesced around action in Libya will be strained by decisions to come. 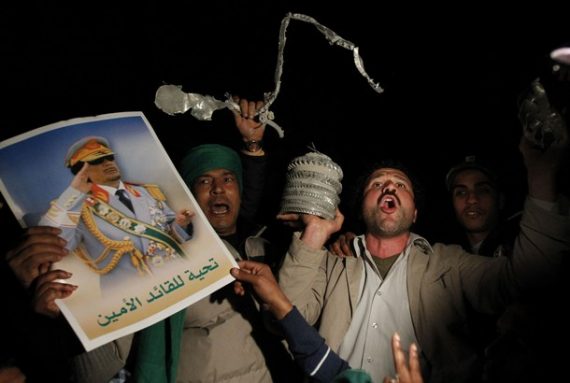 The Arab League, whose call for action in Libya was a key factor in persuading President Obama to join France and the UK in fighting for an international military response, has quickly condemned said response.

The Arab League secretary general, Amr Moussa, deplored the broad scope of the U.S.-European bombing campaign in Libya and said Sunday that he would call a league meeting to reconsider Arab approval of the Western military intervention.

Moussa said the Arab League’s approval of a no-fly zone on March 12 was based on a desire to prevent Moammar Gaddafi’s air force from attacking civilians and was not designed to endorse the intense bombing and missile attacks — including on Tripoli, the capital, and on Libyan ground forces — whose images have filled Arab television screens for two days.

“What is happening in Libya differs from the aim of imposing a no-fly zone,” he said in a statement carried by the Middle East News Agency. “And what we want is the protection of civilians and not the shelling of more civilians.”

Moussa’s declaration suggested that some of the 22 Arab League members were taken aback by what they have seen and wanted to modify their approval lest they be perceived as accepting outright Western military intervention in Libya. Although the eccentric Gaddafi is widely looked down upon in the Arab world, the leaders and people of the Middle East traditionally have risen up in emotional protest at the first sign of Western intervention.

A shift away from the Arab League endorsement, even partial, would constitute a major setback to the U.S.-European campaign. Western leaders brandished the Arab League decision as a justification for their decision to move militarily and as a weapon in the debate to obtain a U.N. Security Council resolution two days before the bombing began.

Russia and China, which abstained from the voting on the U.N. Security Council resolution authorizing military intervention, also expressed regret that Western powers had chosen to get involved despite their advice.

In the Middle East, the abiding power of popular distrust of Western intervention was evident despite the March 12 Arab League decision. It was not clear how many Arab governments shared the hesitations voiced by Moussa, who has said that he plans to run for president in Egypt this year. But despite Western efforts to enlist Arab military forces, only the Western-oriented Persian Gulf emirate of Qatar has announced that it would participate in the campaign.

Meanwhile, the West is likely to expand the scope of operations to achieve the obvious political objectives. Patrick Wintour and Ewen MacAskill for The Guardian (“Gaddafi may become target of air strikes, Liam Fox admits“):

Critics claimed that the coalition of the willing may have been acting disproportionately and had come perilously close to making Gaddafi’s departure an explicit goal of UN policy.

Russia, which abstained on the UN vote last week, called for “an end to indiscriminate force”. Despite denials from coalition forces, Alexander Lukashevich, Russia’s foreign ministry spokesman, said that the coalition had hit non-military targets. He suggested that 48 civilians had been killed. “We believe a mandate given by the UN security council resolution – a controversial move in itself – should not be used to achieve goals outside its provisions, which only see measures necessary to protect civilian population,” he said.

The British defence secretary, Liam Fox, said the scale was in line with UN resolutions that had been “essential in terms of the Gaddafi regime’s ability to prosecute attacks on their own people”. He also said it was possible that Gaddafi himself could become a target of air attacks if the safety of civilians could be guaranteed.

Ahead of a Commons debate and vote tomorrow, leading figures in David Cameron’s cabinet were under pressure to clarify whether the explicit purpose of the attacks was to render Gaddafi’s regime so powerless that it collapses.

Speaking on the Politics Show, Fox said: “Mission accomplished would mean the Libyan people free to control their own destiny. This is very clear – the international community wants his regime to end and wants the Libyan people to control for themselves their own country.” He then added: “Regime change is not an objective, but it may come about as a result of what is happening amongst the people of Libya.”

In the US, the Obama administration was more restrained in its language. Admiral Mike Mullen, the chairman of the US joint chiefs of staff, appearing on NBC’s Meet the Press, insisted the campaign was only a limited, humanitarian operation, not a war, and was not aimed at regime change, as both Cameron and Sarkozy have suggested.
“The goals of this campaign are limited. It is not about seeing him [Gaddafi] go. It is about supporting the UN resolution.” Asked if the mission could be accomplished with Gaddafi still in power, Mullen replied: “This is one outcome.”

But that may be wishful thinking on part of the military, as the statements from key policymakers seem to belie the notion of limited goals. Reporting for the NYT (“Allies Target Qaddafi’s Ground Forces as Libyan Rebels Regroup“), David Kirkpatrick and Elisabeth Bumiller note, “the campaign may be balancing multiple goals. President Obama, Secretary of State Hillary Rodham Clinton and British and French leaders have also talked of a broader policy objective — that Colonel Qaddafi must leave power.”

Meanwhile, Guardian’s Jonathan Freedland (“Libya crisis may save Nicolas Sarkozy from electoral humiliation“) considers the domestic politics within the coalition, noting that one factor that drove French president Nicolas Sarkozy to intervene was the confluence of scheduled elections and low poll numbers. While he doesn’t accuse of Sarkozy of, to use 1990s parlance, “wagging the dog,” he does not that there are “some in the president’s inner circle wondering if Operation Odyssey Dawn might just save the skin of a man who, a matter of days ago, seemed destined for electoral humiliation. Ever so discreetly, they will be hoping Libya can do for Sarkozy what the Falklands did for Margaret Thatcher – anoint a successful war leader deserving of re-election.”

An ultimate decision on the endgame must be reached at some point soon, if it hasn’t already. The Obama administration had gone out of its way to say that the United States is not leading this effort and will soon move into a supporting role. It has already been announced that command will soon pass from new AFRICOM boss Carter Ham to “either a UK-France coalition or NATO.”

Gates is signaling that the United States would be willing to accept a less-than-ideal outcome, with Gaddafi remaining in power.  But he also indicated that a partitioned Libya would not  be acceptable. “I think all countries probably would like to see Libya remain a unified state. Having states in the region begin to break up because of internal differences is a formula for real instability in the future.”

Steven Metz, an expert on insurgency at the Army War College, sees such a mess as likely.

History offers a number of sign posts that an insurgency will occur. Unfortunately Libya has almost all of them. At this point the political objectives of the government and anti-government forces are irreconcilable. Each side wants total victory—either Qaddafi will retain total power or he will be gone. Both sides are intensely devoted to their cause; passions are high. Both have thousands of men with military training, all imbued with a traditional warrior ethos which Qaddafi himself has stoked. The country is awash with arms. Libya has extensive hinterlands with little or no government control that could serve as insurgent bases. Neighboring states are likely to provide insurgent sanctuary whether deliberately—as an act of policy—or inadvertently because a government is unable to control its territory. North Africa has a long history of insurgency, from the anti-colonial wars of the nineteenth and twentieth centuries to more recent conflicts in Chad, Algeria, and Western Sahara. Where insurgency occurred in the past, it is more likely to occur in the future. All this means that there is no place on earth more likely to experience an insurgency in the next few years than Libya.

Unfortunately, there is little the United States can do to prevent an insurgency short of a full-scale military intervention to force Qaddafi’s removal. And that isn’t going to happen. What Washington can do, though, is begin thinking about how it would respond to insurgency.

Should Qaddafi hang on to power and the coming insurgency pit anti-government rebels against his regime, the United States would first have to decide whether it sought to pressure both sides toward a negotiated solution (something unlikely to happen until they have fought long enough to conclude that outright victory was unlikely) or whether it wanted a rebel victory. If a negotiated settlement was the goal, the United States and its allies would need to provide assistance, advice, and training to the rebels, both to prevent their defeat and to encourage them to avoid attacking civilians and to reject extremists. If a rebel victory was the goal, this sort of help would need to be even more extensive.

The Obama administration, then, is likely going to have to either find itself drawn into a much larger intervention than it wishes or will have to accept an outcome with more bloodshed than would have been likely had Gaddafi been allowed to continue his rout of the rebels. The Arab League is unlikely to be on board with either. And the decision-making process will severely test the US-France-UK alliance.