The parents of the youngest victim of the Boston Marathon bombing argue that his killer should be spared from the death penalty. 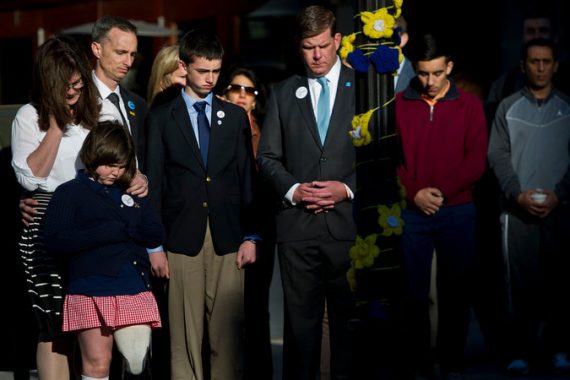 Denise and Bill Richard, the parents of 8 year old Martin Richard, who was killed in the bombing at the Boston Marathon two years ago, and of Jane Richard, who was seriously injured by the same blast that killed her brother, have penned an Op-Ed in the Boston Globe saying that Dzhokhar Tsarnaev, who was convicted last month for his role in the bombing, should be spared the death penalty:

BOSTON — For the last few months, Bill and Denise Richard have let the government use the death of their son Martin to drive home the heinous and depraved nature of the bombings at the 2013 Boston Marathon.

Martin, who was 8, was with his family cheering on the runners when the menacing figure of Dzhokhar Tsarnaev entered the picture. Videos shown in court showed Mr. Tsarnaev lurking behind the family for four minutes before a bomb went off, killing Martin.

The government showcased Martin’s death in its opening and closing arguments at Mr. Tsarnaev’s trial. Prosecutors put Bill Richard on the stand. They had the medical examiner describe in excruciating detail what the bomb did to Martin. They showed the jury the burned clothes Martin had been wearing.

Now, as the government prepares to make its case for why Mr. Tsarnaev should be put to death, the Richard family says it has had enough.

In an open letter to the Department of Justice, printed Friday on the front page of The Boston Globe, the Richards asked the government to stop seeking the death penalty.

“We are in favor of and would support the Department of Justice in taking the death penalty off the table in exchange for the defendant spending the rest of his life in prison without any possibility of release and waiving all of his rights to appeal,” they wrote.

They argued not against the death penalty itself but against what the continued pursuit of it would mean for them — endless appeals, never letting them move on, forcing their two remaining children “to grow up with the lingering, painful reminder of what the defendant took from them.”

“As long as the defendant is in the spotlight, we have no choice but to live a story told on his terms, not ours,” the couple wrote. “The minute the defendant fades from our newspapers and TV screens is the minute we begin the process of rebuilding our lives and our family.”

The Op-Ed itself, which actually appears on the front page of today’s paper, is short and worth reading on your own, but the final paragraph struck me as particularly poignant:

This is a deeply personal issue and we can speak only for ourselves. However, it is clear that peace of mind was taken not just from us, but from all Americans. We honor those who were lost and wish continued strength for all those who were injured. We believe that now is the time to turn the page, end the anguish, and look toward a better future — for us, for Boston, and for the country.

I cannot imagine what the Richard family has been through over the past two years, both the parents and their remaining children. Losing a close family member is always tragic, but losing someone so young in such a horrible manner has to be close to unbearable. Add in the fact that their young daughter was also severely injured to the point where she lost a limb and, according to early reports in the days after the bombing, near death herself, and the stress and emotions must have been multipled exponentially. It would be very easy in such a situation to dwell in anger and to seek the vengeance that leading the call for Tsarnev’s execution would represent. For the Richard family to instead take this position seems admirable in some sense, and says a lot about their own strength of character.  I’ve laid out my reasons for opposing the death penalty many times here, so I’m not going to restate them here. At the same time, as I’ve noted in comments on other posts regarding Tsarnaev, I have a hard time having much sympathy for him or compelled to turn his case into another rant against capital punishment. That being said, what the Richard family has said here is certainly thought provoking.

As for their argument, it is certainly true that if Tsarnaev is sentenced to death in the proceedings that will begin later this month, it will likely be quite some time before he is actually put to death. To pick one example, Timothy McVeigh was convicted for his role in the Oklahoma City bombing in 1997 and sentenced to death, but it wasn’t until 2001 until he was put to death. That four year period is actually fairly short when it comes to how long the death penalty appeals process generally takes. On the state level, even in states like Texas there are prisoners who sit on death row for a decade or more before their execution. On the Federal level, it’s worth noting that McVeigh’s execution 14 years ago was the last execution of a Federal prisoner to date, meaning that the four years his case was under appeal is probably going to be longer in Tsarnaev’s case due in no small part to the fact that these appeals tend to take longer than they did a decade or two ago. So, in that sense, neither the Richard family nor any of the other victims families will get the “closure” that the death penalty is supposed to bring for quite some time. If, on the other hand, Tsarnaev were sentenced to life in prison without parole within the next month or so, his case would effectively be over. If it were the result of a plea negotiation, then it would be the end of the case for certain since plea deals typically include an agreement by the Defendant to waive their right to appeal.

The United States Attorney has issued a perfunctory, largely respectful, statement in response to the Richard family’s argument, but it is clear that they are not going to be deterred from pushing forward with sentencing or exploring a plea deal with Tsarneav to avoid the death penalty. For one thing, while the wishes of a victims family should be an important consideration for prosecutors in a case like this, it should not be the only consideration. That would apply regardless of whether the family was arguing for or against capital punishment. Additionally, the prosecution arguably has a duty to pursue the maximum charges and sentence they can sustain under the law and the facts, even when that includes the death penalty. Among the many problems with the death penalty in the United States is the fact that it is already impacted by arbitrary factors ranging from the race of the defendant and the victim, to what state the crime was committed in, to whether or not the defendant obtains a competent attorney. Adding another level of abitrariness into the process would, I think, just make things worse. At the same time, while Dzhokhar Tsarnaev will likely be sentenced to death, I think we ought consider what the Richard family has to say and, if you oppose the death penalty in general, then you also ought to oppose it when its applied to someone as clearly monstrous as this defendant.