An unsurprising outcome as we approach the second anniversary of the bombing at the Boston Marathon. 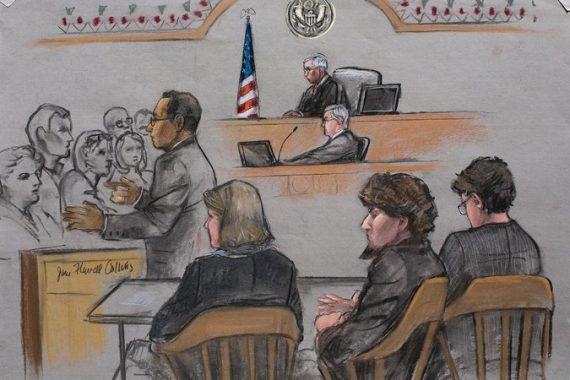 In an outcome that ranks among the least suspenseful legal outcome in recent history, Dzhokhar Tsarnaev was convicted on all charges related to the 2013 bombing at the Boston Marathon carried out by him and his brother Tamerlan:

BOSTON — After 11 hours of deliberations over two days, a federal jury on Wednesday found Dzhokhar Tsarnaev, a failing college student and the youngest child in a dispersed Russian immigrant family, guilty of the 2013 bombings at the Boston Marathon, the worst act of terrorism on American soil since the attacks of Sept. 11, 2001.

The bombings almost two years ago transformed one of the world’s most prestigious road races on a glorious spring afternoon into a scene of carnage with bodies strewn across Boylston Street, giving the nation a horrifying glimpse into the consequences of homegrown, self-taught terrorism. The bombs, planted in retaliation for American-led wars in Iraq and Afghanistan, killed three spectators, blew the limbs off 17 others and wounded 240 more, leaving many with life-altering injuries.

Still, in the first phase of the trial, the defense laid the groundwork for the sentencing phase, casting their client as subordinate to his older brother, Tamerlan, and less culpable for the crimes. The defense team’s goal now is to explain mitigating factors in hopes that jurors will sentence Mr. Tsarnaev to life in prison.

Prosecutors said that Mr. Tsarnaev, then 19, was a full and equal partner with his older brother, Tamerlan, 26, in carrying out the attack. Dzhokhar, repeatedly faced with choices, never went back on the plan, prosecutors said, even when Tamerlan was not around. This was especially evident when Dzhokhar was hiding in a boat by himself and scrawled jihadist messages. “These were deliberate choices, these were political choices,” Aloke Chakravarty, an assistant United States attorney, told the jurors in his closing arguments on Monday said. “An eye for eye, you kill us, we kill you, that’s what he said and that’s what he did.”

“This was a cold, calculated terrorist act,” Mr. Chakravarty said. “This was intentional. It was bloodthirsty. It was to make a point. It was to tell America that ‘We will not be terrorized by you anymore — we will terrorize you.’ ”

The defense, while conceding Mr. Tsarnaev involvement, cast him as a misguided adolescent led by the domineering and malevolent Tamerlan, who was obsessed with violent jihad and who died after a shoot-out with police.

We don’t deny that Jahar fully participated in the events,” Ms. Clarke, told the jury in her closing arguments, using his Americanized nickname. “But if not for Tamerlan, it would not have happened.”

The defense hopes to present mitigating circumstances that show him as less culpable than his brother. It will flesh out details of Mr. Tsarnaev’s life and family history, which includes his forebears being expelled by Stalin from Chechnya in 1944 and ending up in Kyrgyzstan. His family settled in Cambridge, Mass., in 2002. As his parents divorced and returned to Russia, Mr. Tsarnaev, who became an American citizen on Sept. 11, 2012, fell increasingly under the sway of his older brother.

As I said, the outcome of the guilt phase of this trial has never really been in doubt. Not only was the evidence that the prosecution presented against Tsarnaev overwhelming and largely irrefutable, but his attorney’s didn’t really make an effort to argue that he was not legally responsible for what happened two years ago in Boston. Whereas the Federal Government’s case lasted nearly six weeks or so, the defense’s case lasted less than a day and didn’t really focus on trying to undermine the prosecution’s case. In the same vein, the cross-examination of the government’s witnesses was not, according to reporters that were present for the trial, especially harsh in most cases. Indeed, in her closing argument Tsarnaev’s attorney essentially admitted her client’s guilt while setting the jury up for the arguments that she would be making during the penalty phase of the trial in an effort to spare her client from the death penalty.

While this might not sound like how one might expect a defense attorney to handle a criminal trial, it’s one that has worked for this attorney in previous cases, such as when she represented the Unabomber and spared him from the death penalty, and it makes sense when you realize that acquittal was never a viable option in this case given the overwhelming volume of evidence. In that type of situation, a defense attorney risks insulting the jury’s intelligence if they try to rebut evidence that can’t really be rebutted, and that would potentially damage whatever chance might exist that one of those jurors would be willing to stand against the death penalty when it came time for that decision to be made. It may not work in this particular case, and many legal observers who have followed the trial have been skeptical that anything can spare Tsarnaev’s life given the nature of this case and the evidence against him, but it’s certainly the best option that the defense has at this point.

From here, the case will now proceed to the penalty phase, where the jury will be asked to decide if Tsarnaev will be put to death, a process that could last nearly as long as the guilt phase has lasted. During this part of the trial, the prosecution will likely re-present much of the same evidence it did during the first part of the trial, along with victim impact testimony from people who were maimed by the bombs that Tsarnaev and his brother planted and the family members of those who were killed. The defense, on the other hand, will most likely attempt to present Tsarnaev as someone who was swept up into a horrible criminal conspiracy by his domineering older brother, and argue to the jury that he should be sentenced to life in prison rather than put to death because of this. Ordinarily, part of a defense case during this part of a death penalty case would include testimony from the defendant’s family members and possibly the defendant himself. However, it’s not at all clear that this will happen here given the fact that Tsarnaev’s living relatives seem likely to testify in a manner that would be detrimental to him and that putting Tsarnaev himself on the stand means that he would be subject to cross-examination by the prosecution. All the defense needs is one juror who does not believe that the death penalty is appropriate in this case, but given the fact that all of these jurors had said during voir dire that they would be willing to impose a death sentence if the evidence supported it, it seems pretty clear that the odds are decidedly in favor of the government on the penalty phase as well.