Politics, Hubris, And The Questionable Constitutionality Of ObamaCare

This week's hearings in the Supreme Court caught many proponents of the Affordable Care Act off guard. 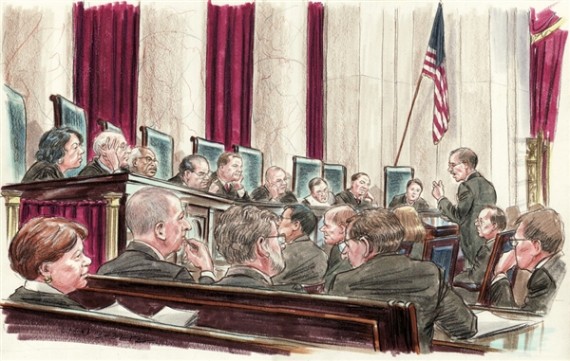 In the days since Tuesday’s oral arguments in the Supreme Court on the Constitutionality of the Patient Protection And Affordable Care Act’s individual mandate, many members of the media, along with legal analysts and (mostly liberal) pundits and columnists looked around and realized that the legal arguments in favor of  the individual mandate were not nearly as strong as they had thought. Not only were they faced with the rather weak performance by Solicitor General Donald Verrilli, but the questions posted by Anthony Kennedy on both Tuesday and Wednesday seemed to indicate that he was at least strongly leaning in the direction of finding the mandate unconstitutional.

The Wall Street Journal took note of the reaction of many:

After the third and final day of Supreme Court scrutiny of the Affordable Care Act, the bravado of the legal establishment has turned to uncertainty and in some cases outright panic. Everyone who said the decision was an easy fait accompli has been proven wrong by a Court that has treated the constitutional questions that ObamaCare poses with the seriousness they deserve.

This reckoning has also been a marvelous public education. The oral arguments have detailed the multiple ways in which the individual mandate upsets the careful equilibrium of the American political system. The Obama Administration’s arguments in favor of the mandate to buy health insurance or pay a penalty stand exposed as a demand for unlimited federal power.

So far the larger liberal reckoning hasn’t been as nuanced as the High Court’s, as evidenced by the media mugging of Solicitor General Donald Verrilli. Liberals castigated his performance during oral arguments Tuesday and all but blamed him for any ObamaCare defeat.

Mr. Verrilli may not be Daniel Webster, but he was more than competent. The problem isn’t that he’s a bad lawyer, it’s that he is defending a bad law with the bad arguments that are the best the Administration could muster. Liberal Justices such as Sonia Sotomayor all but begged him to define a limiting principle on the individual mandate and therefore on federal power. He couldn’t—not because he didn’t know someone would ask but because such a principle does not exist.

Of course, rather than acknowledging the fact that the arguments against the mandate were stronger than they had been given credit for, many seem to have adopted the strategy of E.J. Dionne and started attacking the motives of the Justices:

Three days of Supreme Court arguments over the health-care law demonstrated for all to see that conservative justices are prepared to act as an alternative legislature, diving deeply into policy details as if they were members of the Senate Health, Education, Labor and Pensions Committee.

Senator, excuse me, Justice Samuel Alito quoted Congressional Budget Office figures on Tuesday to talk about the insurance costs of the young. On Wednesday, Chief Justice John Roberts sounded like the House whip in discussing whether parts of the law could stand if other parts fell. He noted that without various provisions, Congress “wouldn’t have been able to put together, cobble together, the votes to get it through.” Tell me again, was this a courtroom or a lobbyist’s office?

The Editors of Dionne’s paper, The Washington Post, see the matter somewhat differently and argue against the idea of viewing the Justices through a primarily political lens:

Sadly, even before the sessions on health-care reform had ended, some liberals were preemptively trying to delegitimize a potential defeat at the court. If the justices strike down the individual mandate to purchase health insurance, they said, they will prove themselves partisan, activist and, essentially, intellectually corrupt.

We share in the disappointment that the justices on both sides of their ideological divide are, for the most part, so predictable. That’s not, in the ideal world, how judging is supposed to work. But we also think there’s a kind of cynicism, or at least intellectual laziness, in asserting that this is an easy or obvious call — that no justice could possibly strike down the mandate out of honest, reasoned conviction. Solicitor General Donald B. Verrilli Jr. had his hands full defending the mandate, not because he’s a bad lawyer, but because it’s not an easy question.

That is the point that Dionne and those who agree with him missed completely. Whether because of hubris or simply the refusal to acknowledge that their opponents arguments could possibly have merit, most of the proponents of the PPACA didn’t even consider the possibility that the mandate might not pass Constitutional must. Indeed, while the law was being debated in Congress, and when the first Op-Ed appeared that raised the issue,  Democratic Members of Congress dismissed the idea entirely. Nancy Pelosi famously asked a reporter “Are you serious?” when he asked her if she believed the bill was Constitutional. Other members of Congress similarly dismissed the possibility when asked about it, despite the fact that the suggestion that the law was unconstitutional had given rise to a political movement that would soon help sweep Republicans to control of the House.

No doubt, the journey of the various cases through the Federal Court System also helped to reinforce the self-assurance that proponents of the law had been feeling from the beginning. For the most part, Federal Courts below the Supreme Court that dealt with the issue upheld the law. Given that these Courts are bound by Supreme Court precedent, this isn’t entirely surprising. To be sure, there were notable exceptions to this trend, such as Judge Henry Hudson in Virginia who was the first judge to issue an opinion declaring the law unconstitutional. In Florida, both a District Court Judge and a three judge panel of the 11th Circuit Court of Appeals noted that the mandate went far beyond any previous attempt by Congress to exercise power under the Commerce Clause. In September 2011, these judges were joined by Judge Christopher Connor of the Middle District of Pennsylvania, who also struck down the law.

One would have thought that this alone would have been enough of a signal to the law’s proponents that this was not nearly as easy a question as they were pretending it was, and that the outcome in this Supreme Court was by no means certain. Indeed, as I’ve noted, the issues at stake in these cases are the same issues the nation has been debating for over 200 years. Yes, if you look at the Supreme Court precedent on Commerce Clause cases one could make fairly well educated guess well in advance that the law would be upheld, in fact I did so here at OTB myself. At the same time, the supreme confidence that many on the left seemed to be exhibiting about this case up until Tuesday was an example of a kind of myopia where they only seemed to be listening to those opinions about the issue that said what they wanted to hear. Had they listened to other sources, such as Randy Barnett over at The Volokh Conspiracy,  they would have seen that the arguments against the law were probably a lot stronger than they were giving credit for. Additionally, cases like United States v. Lopez and  United States v. Morrison, decided by a court that still included David Souter and John Paul Stevens, were sending a signal that a half century of deference on Commerce Clause issues was coming to an end. A subsequent case, Gonzaelz v. Raich, seemed to suggest this trend was over to some, but there have been some suggestions that the outcome in that case would have been different had it dealt with a substance other than illegal drugs.

Greg Sargent seems to be one of the only pundits on the left who understands this:

But there’s another explanation for the botched prediction: Simply put, legal observers of all stripes, and Obamacare’s proponents, including those in the administration, badly misjudged, and were too overconfident about, the tone, attitude and approach that the court’s conservative bloc, particularly Justice Scalia, would take towards the administration’s arguments.

The Scalia gambit was based largely on his opinion in Raich, but from the oral arguments it seems clear that none of the judges consider that case controlling. Instead, the concerns that Justice Kennedy expressed seemed based on the concern that the mandate went far beyond anything the Court has dealt with before. Indeed, if the mandate is struck down, it will be interesting to see how the Court handles its previous precedents. My anticipation is that they will distinguish each and every one of them while limiting the scope of the Commerce Clause power, rather than explicitly overruling any of them.

The reason that the proponents the PPACA are so shocked right now, then, is because they simply didn’t appreciate the precarious position they were in, not just legally but politically. In a post over at his own place, Dave Schuler makes an excellent point about the PPACA that its proponents don’t seem to comprehend:

Social Security was enacted into law in 1935 with bipartisan support. Medicare and Medicaid came into being 30 years later, also with bipartisan support. The PPACA in contrast was passed on a purely partisan vote. However, its undemocratic nature doesn’t end their. The representative who voted for the PPACA were elected from gerrymandered districts and even in those they were elected by, at best, simple majorities of the minority of registered voters who actually voted. Construing that as democracy is a stretch.

We do not have a democracy or even a narrow majoritarianism but a constitutional order in which, at least in theory, the Congress is constrained by the constitution to act within its enumerated powers. The Court is now deciding if the Congress has done that in the case of the PPACA.

That was the Congress’s choice. It could have elected to avoid the present situation in any number of ways. If you don’t like policies being decided by the Supreme Court, blame the Congress.

Indeed, throughout the entire run up to the President’s “Big F***ing Deal” Moment, the entire question of whether or not this law was Constitutional was dismissed out of hand. As public opposition to the law grew, the Administration and Congress seemed to become more and more tone deaf, as if it didn’t matter at all that what was supposed to be cornerstone legislation of the President Obama’s first term had inspired a loud, active, and dedicated opposition to act. To some extent, they learned their lesson in that regard in the 2010 Midterms, but this week demonstrated that the hubris had not completely gone away. Now that the blinders are off, the harsh light of reality is difficult for some to bear.  Perhaps the Supreme Court will uphold the law in the end. However, if they strike it down the proponents will have nobody to blame for this but themselves.