Given public opinion on the proposed Islamic community center that is currently cominating the news, we would expect that opposition to the project would be strongest in Manhattan itself.

As we likely know, public national public opinion is against the construction of an Islamic community center two blocks from where the WTC once stood.

According to the new survey out Wednesday, nearly 70 percent of all Americans oppose the controversial plan to build the mosque just blocks away from the solemn site in lower Manhattan while just 29 percent favor the construction.

That poll was released August 11.  On August 10, the Marist College Institute for Public Opinion published a poll of New Yorkers [PDF] that included questions about the proposed Islamic community center that has been in the news of late.

According to that poll, a majority of New York City dwellers oppose the project:  53% oppose and 34% favor with 13% being unsure.

It is interesting that as one gets closer to the project, opposition lessens.  Indeed, if one looks within the Marist poll to the breakdown of opinion by borough we find that not only does opposition lessen, support moves into majority public opinion when we get to Manhattan.  If we look at the table below, the one borough of NYC that supports the project is the borough where the building will be built (as well as the borough that directly suffered the attacks of 9/11).  According to the table 53% of the registered voters polled in Manhattan favor the project, 31% oppose it and 16% are unsure.

If the one of the pillars of the argument against the project in question is that it is directly offensive to the survivors and victims of 9/11, wouldn’t the largest amount of opposition be emanating from the place that was attacked?  If anyone is going to see the former Burlington Coat Factory at the center of this controversy to be “hallowed ground” wouldn’t it be the people of Manhattan?

At a minimum, it is curious that the farther away one goes from the locus of the debate that opposition grows.  To summarize:

Of course, a major part of the problem is that a lot of people think that a mosque is being build on the remains of the WTC rather than a community center being built in a dense urban neighborhood.

Since a lot of people are predicating their argument on issues of sensitivity to victims of the attack, this information strikes me as potentially quite useful.  Really, shouldn’t the most offended be Manhattanites?  And if that is not the case (and these number indicate that it is not) does that not undercut the “insensitivity” argument? 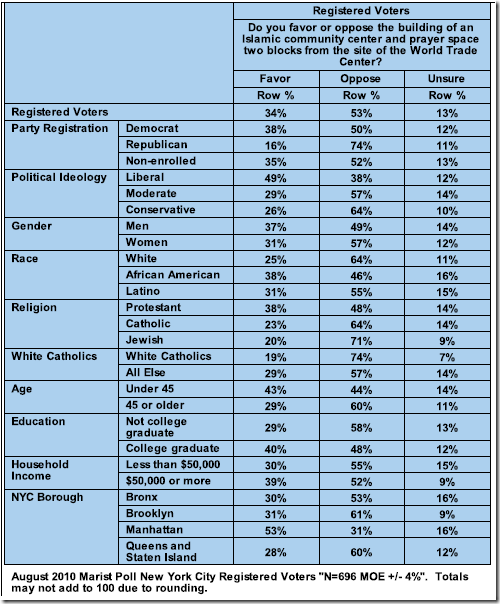