A new report will likely add fuel to the fire of conservative outrage over Chief Justice Roberts' decision to uphold the PPACA. 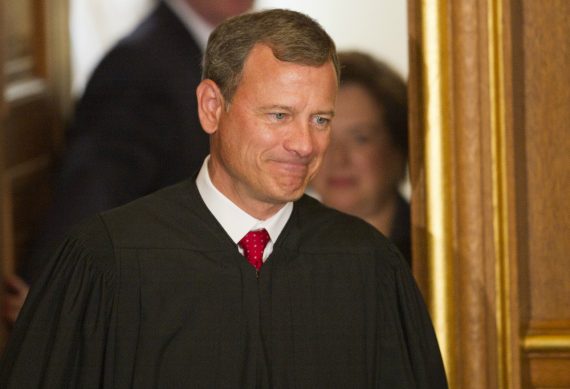 There’s been much speculation in the days since the Supreme Court’s ruling upholding the PPACA that Chief Justice Roberts may have switched his position from one in which he was willing to join the four conservatives in striking down the mandate, and indeed the entire law, to one in which he was willing to join the four liberal Justices to uphold it as constitutional under the Taxing Power. James Joyner, Steven Taylor, and myself have all written about the topic, although my post points out some alternative explanations for how Roberts ended up ruling the way he did that don’t involve a switch. In some sense, this is an entirely academic argument because whether Roberts switched or not is largely irrelevant to the Court’s ruling. It’s mostly of interest, perhaps, as a historical matter and as a clue to how Roberts might rule on cases in which the Court is sharply divided in the future. This morning, though, a reporter for CBS News broke a story that is guaranteed to keep this story out there, and to provide more fuel to conservatives who seem to want to find a conspiracy in the fact that the Chief Justice ruled differently from how they expected he would:

(CBS News) Chief Justice John Roberts initially sided with the Supreme Court’s four conservative justices to strike down the heart of President Obama’s health care reform law, the Affordable Care Act, but later changed his position and formed an alliance with liberals to uphold the bulk of the law, according to two sources with specific knowledge of the deliberations.

Roberts then withstood a month-long, desperate campaign to bring him back to his original position, the sources said. Ironically, Justice Anthony Kennedy – believed by many conservatives to be the justice most likely to defect and vote for the law – led the effort to try to bring Roberts back to the fold.

“He was relentless,” one source said of Kennedy’s efforts. “He was very engaged in this.”

But this time, Roberts held firm. And so the conservatives handed him their own message which, as one justice put it, essentially translated into, “You’re on your own.”

The conservatives refused to join any aspect of his opinion, including sections with which they agreed, such as his analysis imposing limits on Congress’ power under the Commerce Clause, the sources said.

Instead, the four joined forces and crafted a highly unusual, unsigned joint dissent. They deliberately ignored Roberts’ decision, the sources said, as if they were no longer even willing to engage with him in debate.

Here’s how the reporter, Jan Crawford described what happened in the wake of the Court’s historic three days of oral argument in March:

After the historic oral arguments in March, the two knowledgeable sources said, Roberts and the four conservatives were poised to strike down at least the individual mandate. There were other issues being argued – severability and the Medicaid extension – but the mandate was the ballgame.

It required individuals to buy insurance or pay a penalty. Congress had never before in the history of the nation ordered Americans to buy a product from a private company as part of its broad powers to regulate commerce. Opponents argued that the law exceeded Congress’ power under the Constitution, and an Atlanta-based federal appeals court agreed.

The Atlanta-based federal appeals court said Congress didn’t have that kind of expansive power, and it struck down the mandate as unconstitutional.

On this point – Congress’ commerce power – Roberts agreed. In the Court’s private conference immediately after the arguments, he was aligned with the four conservatives to strike down the mandate.

Because Roberts was the most senior justice in the majority to strike down the mandate, he got to choose which justice would write the Court’s historic decision. He kept it for himself.

Over the next six weeks, as Roberts began to craft the decision striking down the mandate, the external pressure began to grow. Roberts almost certainly was aware of it.

Roberts pays attention to media coverage. As Chief Justice, he is keenly aware of his leadership role on the Court, and he also is sensitive to how the Court is perceived by the public.

There were countless news articles in May warning of damage to the Court – and to Roberts’ reputation – if the Court were to strike down the mandate. Leading politicians, including the President himself, had expressed confidence the mandate would be upheld.

Some even suggested that if Roberts struck down the mandate, it would prove he had been deceitful during his confirmation hearings, when he explained a philosophy of judicial restraint.

It was around this time that it also became clear to the conservative justices that Roberts was, as one put it, “wobbly,” the sources said.

It is not known why Roberts changed his view on the mandate and decided to uphold the law. At least one conservative justice tried to get him to explain it, but was unsatisfied with the response, according to a source with knowledge of the conversation.

And here’s Crawford discussing the report this morning on Face The Nation:

No doubt this is going just end up throwing gasoline on the fire that has been burning in some conservative circles since Thursday, where words like “Traitor” in reference to Roberts are being tossed around with regularity. Indeed, one conservative blogger already cites this report as evidence that Roberts is a “turncoat.”  There are several ways in which these types of criticisms bother me. First of all, they assume that Roberts was obligated to vote a certain way because he was appointed by a Republican President. If that’s the way these people define the role of a Supreme Court Justice, then it strikes me that it hardly matters that we even have Supreme Court Justices at all. After all, we  can just replace them with a computer that spits out decisions expected from a “Republican” or “Democratic” judge and announce the result accordingly. The job that Roberts, like any judge has, it to rule on the case before him based on the law, which included both the Constitution and past precedent (unless that precedent is found to be incompatible with the Constitution). Making conservatives happy doesn’t appear anywhere on that list, and it’s rather obvious that most of the conservative activist disdain for Roberts over the past several days is merely motivated by the fact that they disagree with how he voted, not because they have any kind of coherent legal argument against the position he took. The second problem with this argument, to the extent it even is an argument, is that it views the law based on a purely political point of view. These people would be quiet if, say, Roberts had decided to switch his vote (assuming that’s what actually happened) from pro-mandate to anti-mandate. Finally, even if it’s true that Roberts switched his vote, so what? The process of how this decision was made isn’t relevant at all, the outcome and the reasoning are. If they think Roberts is wrong in his tax argument, let conservatives point out where his reasoning is wrong rather than trying to impeach his integrity like this.

There are other issues that this report raises, of course. One wonders who Crawford’s source(s) might be for this story, because there’s a fairly limited number of people who would be privy to this kind of information. Outside of the small circle of Supreme Court Justices and their Clerks, who have never been known to speak to the press about the internal operations of the Court in this manner, there really isn’t anyone who would even be close to a credible source for information like this. So, this means that Crawford’s source has to come from one of two groups; either one of the four conservative on the Court, or their Clerks (personally I think it’s far more likely to be a Clerk than a Justice) Whichever one it is, it’s really rather disturbing to me that they would use the cloak of anonymity to attempt to embarrass the Chief Justice in public like this by essentially suggesting that he changed his vote because of outside pressure, rather than because his position on the tax argument had changed. There have been other times when internal Court disputes have become public, the most notable being the Woodward and Bernstein book The Brethren, but it’s still a highly unusual practice and it has never been this blatantly political. Quite honestly, it puts a sadly vindictive end to what had otherwise been a pretty good term for the Court. The Chief Justice is vacationing in Malta right now with his wife, but one imagines this report isn’t going to make him a very happy man.