A new Gallup poll seems to show the Supreme Court losing esteem in the eyes of the public:

After an important term in which the U.S. Supreme Court made landmark decisions on cases involving voting rights, gay rights, and affirmative action, the institution’s approval rating has declined to its lowest level since June 2005. Forty-three percent of Americans now approve of the Supreme Court, down six percentage points from September of last year. Slightly more Americans disapprove of the court (46%) than approve, which has happened only one other time since Gallup first asked this question in 2000.

The current results stem from a July 10-14 Gallup poll — shortly after the conclusion of the 2012-2013 Supreme Court term that included major rulings on key social issues. Together, the court’s decisions are difficult to pigeonhole ideologically — the court struck down a 1996 law prohibiting federal recognition of gay marriage, while also invalidating portions of the 1965 Voting Rights Act. Nonetheless, they involve controversial issues for the American public, and even within the court itself, which decided these two cases by slim 5-4 margins.

As this chart shows, there’s been a marked drop in public approval of the Supreme Court, and a corresponding increase in disapproval over the past 13 years: 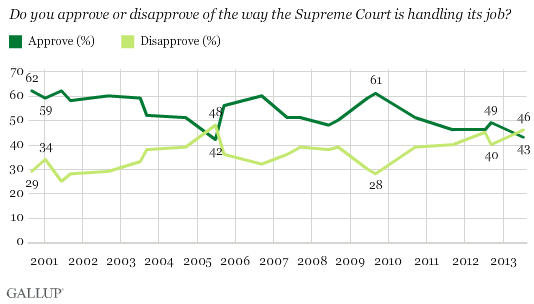 Given the number of controversial cases that the Court has taken on in recent years, this probably isn’t entirely surprising. Just in the last two or three terms, there has been enough in the Court’s decisions to annoy people on both sides of the political aisle be it the Obamacare decision, the Voting Rights Act decision, or DOMA. However, as I argued last year in connection with a similar poll, the real cause for the loss of public confidence in what remains the least political branch of the Federal Government has less to do with specific decisions and more to do with a general decline in trust for public institutions:

If it was public dissatisfaction with the Court’s work that was the cause of this dip in approval, then one would have expected to see a significant drop off in the aftermath of the decision in Bush v. Gore. Instead, public opinion remained relatively consistent until 2004-2005 when it began dropping, and indeed reached a point in 2005 where slightly more people disapproved of the Court than approved. Now, arguably, the poll may reflect the general increase in public confidence in government at all levels that we saw in the wake of the September 11th attacks. However, after that “rally round the flag” effect wore off and public distrust of other government institutions continued to return to previous levels, public confidence in the Court increased and indeed returned to the levels it was at immediately after September 11th. Until the past three years when it started declining again.

This suggests to me that public approval of the Court isn’t necessarily heavily influenced by the outcome of individual cases. Yes, cases like Bush v. Gore, Kelo v. City of New London, and Citizens United may be controversial and generate a lot of focused opposition from interested parties, but there really doesn’t seem to be any evidence that any single decision, or any group of decisions for that matter, has that much of an influence on how the public feels about the Court. Indeed, back in 2010 on the eve of Elena Kagan’s confirmation hearings, one poll found that few Americans could name a single Supreme Court case other than Roe v. Wade, and that they didn’t have a very good idea of what kind of work the Supreme Court actually does. Another poll a month earlier found that most Americans couldn’t name the members of the Court. It’s doubtful those numbers have changed significantly in the past two years. So, placing the blame for the decline on public opinion on what the Court has actually does doesn’t seem to make sense.

Things get more interesting when you look at the partisan breakdown for the SCOTUS approval numbers:

Less than a third (31%) of self-identified Republicans approve of the Supreme Court, close to the record low of 29% measured shortly after the court’s ruling on the healthcare law last year. While a majority of Democrats, 58%, approve of the high court, their approval is now lower than it was in July of last year, when 68% approved. Independents, meanwhile, register a 39% approval rating of the court, the lowest measured for this group since Gallup first asked the question. 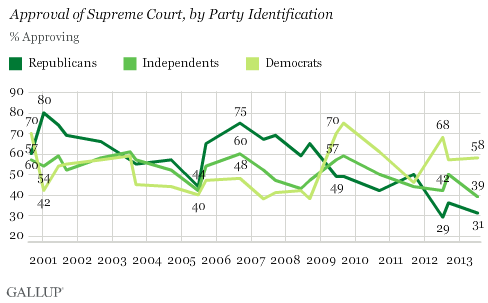 In its commentary, Gallup notes that Republican disapproval of the Court began to increase almost precisely with the time when President Obama took office, which seems to correspond almost exactly with similar Democratic disapproval of the Court during the George W. Bush era. What’s odd about the reaction of Republican reaction, of course, is that the Court remains a largely Republican institution. Presently, five of the members of the Court (Roberts, Scalia, Kennedy, Thomas, and Alito) were appointed by Republican Presidents. At the time President Obama seven of the nine Justices (Roberts, Stevens, Scalia, Kennedy, Souter,  Thomas, and Alito) were appointed by Republican Presidents going back to Gerald Ford. Even with the addition of two Obama appointees replacing Justices Souter and Stevens, the Court’s opinions over the past several years haven’t exactly been something that the right should complain too much about even taking the Obamacare decision into account. Instead, it strikes me that these numbers on the right correspond to the general distrust in government that has typified the growth in influence of  the Tea Party movement. Indeed, to hear some Tea Partiers tell it, we don’t even need a Supreme Court to decide what the law is because the answers are all “right there in the Constitution” when, of course it isn’t nearly that simple.

The broader point that a poll like this stands for becomes apparent when you take into account other polling that shows that Congress, the Presidency and, indeed, almost any other public institution outside of the military and police seem to have lost the trust of the public.  In the long term, that’s simply not healthy.