According to a new poll, two-thirds of Americans can’t name a single member of the U.S. Supreme Court:

EAGAN, Minn., June 1 /PRNewswire/ — Nearly two-thirds of Americans cannot name any members of the U.S. Supreme Court, according to a new national survey by FindLaw.com (http://www.findlaw.com), the most popular legal information website. Even as Supreme Court nominee Elena Kagan awaits Senate confirmation hearings to replace retiring justice John Paul Stevens, only 35 percent of Americans can name even one member of the nation’s highest court.

According to the FindLaw.com survey, the percentages of Americans who can name any U.S. Supreme Court justices are:

Only 1 percent of Americans could correctly name all nine current members of the Supreme Court.

In addition, many Americans think that retired justices Sandra Day O’Connor and David Souter are still active members of the Supreme Court. O’Connor and Souter retired from the Court in 2006 and 2009, respectively.

This isn’t entirely surprising, of course. Outside of confirmation hearings, Supreme Court Justices do their work outside the view of the public and even when a controversial or highly publicized decision is issued, it comes from a collective body and is communicated by reporters rather than the Justices themselves. Unlike, say, people who don’t have enough awareness of politics to identity their Federal or state representatives, the fact that large numbers of Americans don’t know who Stephen Breyer or Anthony Kennedy might be is neither surprising or concerning. One imagines that these numbers would change, though, if the Court ever did accept the long-discussed idea of cameras in the courtroom.

The rankings above are interesting in themselves. Twenty years after the most sensational and controversial confirmation hearings in history, even Clarence Thomas has faded into virtual anonymity to the point where he’s able to spend his summers traveling around the country in an RV without most people realizing who he might be. One does have to feel a little sorry for Stephen Breyer, though, when you see that 97% of the people polled have no idea who he is. 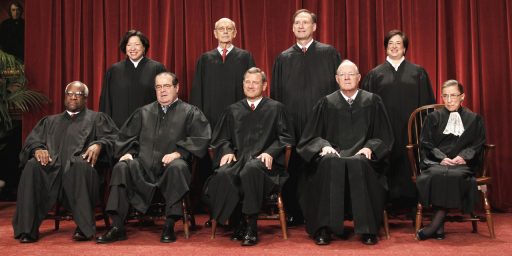