How can we know what happens next in North Korea when we didn't even know Kim Jong-il had died? 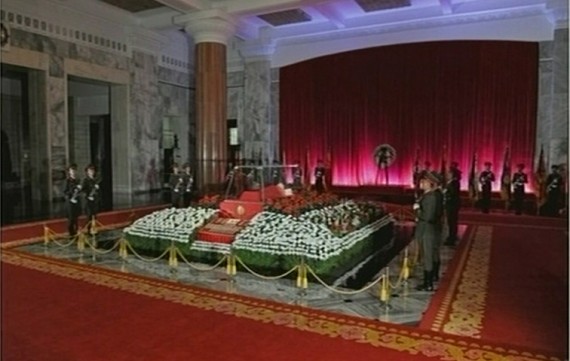 Today’s New York Times notes the extent to which the death of Korea’s reclusive “Dear Leader” reveals how little we know about what really goes on inside the modern day Hermit Kingdom:

WASHINGTON — Kim Jong-il, the enigmatic North Korean leader, died on a train at 8:30 a.m. Saturday in his country. Forty-eight hours later, officials in South Korea still did not know anything about it — to say nothing of Washington, where the State Department acknowledged “press reporting” of Mr. Kim’s death well after North Korean state media had already announced it.

For South Korean and American intelligence services to have failed to pick up any clues to this momentous development — panicked phone calls between government officials, say, or soldiers massing around Mr. Kim’s train — attests to the secretive nature of North Korea, a country not only at odds with most of the world but also sealed off from it in a way that defies spies or satellites.

Asian and American intelligence services have failed before to pick up significant developments in North Korea. Pyongyang built a sprawling plant to enrich uranium that went undetected for about a year and a half until North Korean officials showed it off in late 2010 to an American nuclear scientist. The North also helped build a complete nuclear reactor in Syria without tipping off Western intelligence.

As the United States and its allies confront a perilous leadership transition in North Korea — a failed state with nuclear weapons — the closed nature of the country will greatly complicate their calculations. With little information about Mr. Kim’s son and successor, Kim Jong-un, and even less insight into the palace intrigue in Pyongyang, the North’s capital, much of their response will necessarily be guesswork.

“We have clear plans about what to do if North Korea attacks, but not if the North Korean regime unravels,” said Michael J. Green, a former Asia adviser in the Bush administration. “Every time you do these scenarios, one of the first objectives is trying to find out what’s going on inside North Korea.”

In many countries, that would involve intercepting phone calls between government officials or peering down from spy satellites. And indeed, American spy planes and satellites scan the country. Highly sensitive antennas along the border between South and North Korea pick up electronic signals. South Korean intelligence officials interview thousands of North Koreans who defect to the South each year.

And yet remarkably little is known about the inner workings of the North Korean government. Pyongyang, officials said, keeps sensitive information limited to a small circle of officials, who do not talk.

“This is a society that thrives on its opaqueness,” said Christopher R. Hill, a former special envoy who negotiated with the North over its nuclear program. “It is very complex. To understand the leadership structure requires going way back into Korean culture to understand Confucian principles.”

It isn’t just the United States, Japan, and South Korea that had no idea that Kim had died until the news was announced yesterday, but it seems fairly clear that the Chinese weren’t aware of it either, although it’s probable that the North Koreans may have informed their contacts in Beijing before releasing the news to the rest of the world. In fact, it’s worth point out the fact that we don’t really know that Kim really died on Saturday morning, or that he really died on a train trip. He could’ve died hours or days before that, and the interim time has been taken up with forces inside the country shoring up power and preparing the inevitable propaganda barrage of mourners, which seemed to erupt conveniently quickly yesterday.  Undoubtedly, the North Koreans know that they are being observed from all sides and have already taken steps to limit communication over channels that can be monitored from outside the country. Additionally, Kim has been ill for at least a year now and it’s likely that contingency plans were already in place for his death (Communists love plans, remember). Executing that plan when Kim did die would have been relatively straightforward given the closed nature of the Kim regime.

Despite the fact that the only thing we really know about North Korea is that we don’t really know much about North Korea, that hasn’t stopped all manner of speculation about what the rise of Kim Jong-Un, who has already been given the title “Great Successor” despite being about the same age as people in the United States who barely out of college, means for North Korea and the rest of the world. One of the most popular theories yesterday seemed to be that the young Kim would have a difficult time consolidating power, that he would become a puppet of the advisers his father left behind to guide him, or that the end of the Pyongyang government was near. Michael Hirsh, meanwhile, pointed out that anyone who counts the Kim regime’s days as numbered may be sadly disappointed:

There is, perhaps, no totalitarianism in the world that is as all-embracing as North Korea’s. Something like it hasn’t existed since Stalin died (and with him a personality cult very much like that which surrounds the Kims). I have spent time in other police states, but even in some of the most vicious of them, an undercurrent of dissent ran like a subterranean stream through the back rooms of restaurants, bars and private meeting rooms. Even under Saddam Hussein, Iraqi cab drivers would glance around when pressed and spit out their hatred of the dictator. Dissidents in Myanmar, during the worst of the crackdown, would whisper their fealty to democracy leader Aung San Suu Kyi. In Vietnam, Saigon residents would raise their eyebrows and snort at the central planners in the North. In China, after Mao’s death, there was a reappraisal of his policies, and the Communist Party ultimately allowed that some elements of “Mao Zedong Thought,” like the disastrous Great Leap Forward of the ’50s or the Cultural Revolution of the ’60s, had not been successful.

But in North Korea, long after Stalinism has become a yellowing chapter in the history books elsewhere—and despite intermittent reports of a power struggle at the top– there is little evidence that dissent among the public exists at all, even today. The effects of the Arab Spring seem to have reached China, and possibly Russia. But there are no reports of any democracy movement in North Korea. Very few people yet seem willing to question whether the Kim family dynasty might be to blame for an economic slide that took the North from parity with South Korea, as recently as the 1960s, to one of the highest rates of malnutrition in the world and the death of hundreds of thousands of people from starvation.

It is too simplistic to attribute this mindset to a mere fear of repression or self-censorship.

Indeed, one only needs to listen to this seven minute description by the late Christopher Hitchens (and how unfortunate is it that he did not live long enough to learn of the death of one of the world’s worst dictators?) of his own trip to Pyongyang:

The North Korean people have lived under this regime for half a century now, and by all accounts those who have defected to China or South Korea are genuinely shocked to learn that the things they were told about the outside world and the DPRK’s place in it is untrue. It’s worse, it seems, than the culture shock that defectors from the Soviet Union would experience. Under those conditions, the prospects for a “Pyongyang Spring” seem rather unlikely unless accompanied by an utter collapse in the government itself and, since everyone in a position of power knows that their personal survival depends on keeping the government in power,  the likelihood of that happening may not be as high as those of us who wish the North Korean people to be free would hope.

As for Kim Jong-Un himself, the Wall Street Journal suggests that he may actually be worse than his father:

North Korea’s new leader is depicted in U.S. intelligence assessments as a volatile youth with a sadistic streak who may be even more unpredictable than his late father, according to U.S. officials.

U.S. intelligence officials say they have limited information about Kim Jong Eun, the youngest son of Kim Jong Il and his anointed successor. The U.S. has had few direct contacts on which to make a “conclusive assessment” of Kim Jong Eun’s nature and character, a senior U.S. official said.

The portrait of Kim Jong Eun that emerges in his U.S. profile is that of a young man who, despite years of education in the West, is steeped in his father’s cult of personality and may be even more mercurial and merciless, officials said.

A further detriment to the younger Mr. Kim’s outside reputation outside North Korea, were two North Korean assaults on South Korea last year, which U.S. officials have said appeared to have been instigated by Mr. Kim’s son to prove his credentials.

“His temperament is not good,” said Rep. Mike Rogers (R., Mich.), chairman of the House intelligence committee, citing the attacks.

I tend to agree with Daniel Drezner’s take on this in two respect. First, as he puts it, we have “no friggin’ clue” what’s going to happen next. Second, Kim Jong-Un, or whoever is going to be guiding him from behind the scenes, is likely to last longer than some might think. That second part is bad for the North Korean people most of all, who will continue suffering under what is undoubtedly the worst tyranny on the planet today, and quite possibly the most totalitarian regime that has ever existed. The first is bad for the rest of us. We saw last year what can happen when the North Koreans act unexpectedly when they sank a South Korean naval ship and shelled a South Korean island, raising tensions on the Peninsula twice in less than six months.  As it turns out, both of those exercises may have been related to efforts to enhance the military reputation of the youngest Kim (I have been tempted more than once in this post to refer to the new leader of the DPRK as “Lil’ Kim”). What happens next is anyone’s guess, and that may be the biggest cause for concern.