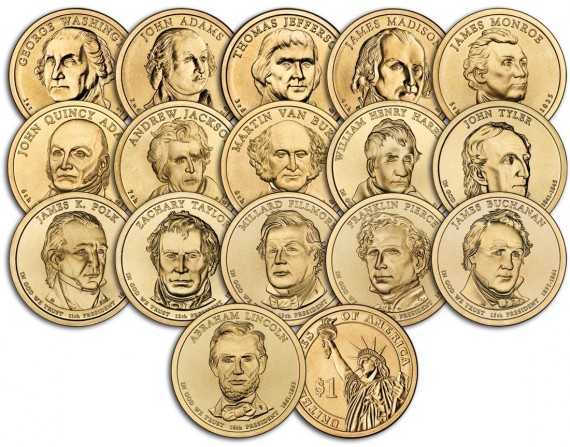 Once again, the U.S. Mint’s experiment with a Dollar Coin is ending in failure:

The U.S. government, its vaults stuffed with 1.4 billion one-dollar coins bearing the likenesses of dead presidents, has had enough of them. It is going to curtail production.

“Nobody wants them,” Vice President Joe Biden said Tuesday. That is for sure: The Mint says there are enough $1 coins sitting in Federal Reserve vaults to meet demand for a decade, and the inventory was on track to hit two billion by 2016.

More than 40 percent of the coins that are minted are returned to the government unwanted, the Treasury said. The rest apparently sit in vending machines — one of the few places they are widely used — or in the drawers of coin collectors.

What the coins don’t do is get around much. In fact, the Mint has never had much luck with dollar coins. The Susan B. Anthony dollar (1979-1981, revived for one year in 1999) never caught on; some people said it was too close in size to the quarter. Neither did the Sacagawea Golden Dollars (2000-2008) or its successor, the Native American $1 Coin, which has the same front but a different back.

But that didn’t discourage Congress. In 2005, it mandated that the Mint make $1 coins with the likenesses of the presidents, four each year between 2007 to 2016. So far, the Mint is up to James Garfield, the 20th president. Next up: Chester A. Arthur.

“And as it will shock you all, the call for Chester A. Arthur coins is not there,” Biden said at a Cabinet-level meeting of a White House campaign to cut government waste.

Arthur fans needn’t fret. The Mint will keep producing the presidential $1 coins on schedule, but will only make enough to meet collector demand and no longer attempt to circulate them. By law, 20 percent of all dollar coins produced have to be Native American coins, so production of them will be reduced too.

The move, the Treasury said, will save taxpayers $50 million a year — or about 15 minutes worth of the federal deficit.

The decision is a milestone of sorts in a long-running battle between those think it is wasteful to keep printing dollar bills that wear out and have to be replaced frequently, and those who hate the $1 coin and see it as the real waste of money because Americans don’t like them.

As others have noted before, the idea of a Dollar Coin is never going to work as long as the Dollar Bill remains in circulation. When Canada and the United Kingdom replaced their One Dollar and One Pound notes with coins, they also began a program of phasing out the paper currency version by destroying them as they made their way into the banking system and replacing them with an equivalent amount of dollar coins. Unless and until we do that here, there will never be a U.S. Dollar Coin.