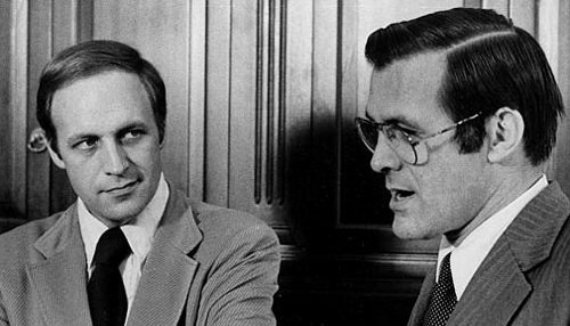 Conor Friedersdorf points to an interesting section of  former Vice President Cheney’s that points out the role that he and Donald Rumsfeld played in implementing one of the most misguided public policy ideas in recent American history. For those who weren’t around at the time, in 1971, in response to rising inflation and a weakening economy, President Nixon imposed a series of economic measures including controls on wages and prices throughout a wide swath of the American economy. At the time, Nixon had brought support from the public and even from economists who thought it was the only way to deal with what looked to be out of control inflation. By 1974, though, it was clear that Nixon’s policies hadn’t worked at all, and had probably made the situation worse:

There was no national emergency in the summer of ’71: unemployment stood at 6 percent, inflation only a point higher than it is now. Yet, after Nixon’s announcement, the markets rallied, the press swooned, and, even though his speech pre-empted the popular Western Bonanza, the people loved it, too — 75 percent backed the plan in polls.

As Nobel Prize-winning economist Milton Friedman correctly predicted, however, Nixon’s gambit ended “in utter failure and the emergence into the open of the suppressed inflation.” The people would pay the price — but not until after he’d coasted to a landslide re-election in 1972 over Democratic Sen. George McGovern.

By the time Nixon reimposed a temporary freeze in June 1973, Daniel Yergin and Joseph Stanislaw explain in The Commanding Heights: The Battle for the World Economy, it was obvious that price controls didn’t work: “Ranchers stopped shipping their cattle to the market, farmers drowned their chickens, and consumers emptied the shelves of supermarkets.”

So, where does Dick Cheney fit in to all this, well, he explains in his book:

The two entities that were supposed to write the regulations, the Pay Board and the Price Commission, wrangled and dithered. When it looked as though they were going to miss a crucial deadline for getting regulations published in the Federal Register, Rumsfeld decided to take things in hand. He assembled Jack Grayson, the chairman of the Price Commission, and about a dozen of our CLC staff and said that we wouldn’t be leaving until we had the regulations ready for the printer. We set up in Rumsfeld’s outer office, and as others paced and dictated, I sat at one of the secretary’s desks and typed everything on an IBM Selectric typewriter.

By nine the next morning, when the secretaries arrived and emptied the ashtrays and replenished the coffee, we had written the regulations that would now be governing a major share of the U.S. economy. The degree of detail we achieved during our overnighter was truly impressive. We drew distinctions between apples and applesauce; popped and unpopped corn; raw cabbage and packaged slaw; fresh oranges and glazed citrus peel; garden plants, cut flowers, and floral wreaths. We regulated seafood products “including those which have been shelled, shucked, iced, skinned, scaled, eviscerated, or decapitated.” We covered products custom-made to individual order, including leather goods, fur apparel, jewelry, and wigs and toupees.

It was utterly insane idea, of course, and it was largely responsible for the inflationary spiral that followed, which didn’t end until Fed Chairman Paul Volcker, with the support of newly elected President Ronald Reagan, killed it with an aggressively tight monetary policy that put the economy into a deep recession.

Thanks for nothing, Mr. Vice-President.