President Trump appears to be backing away from the idea of declaring a national emergency to get his wall built. But the other options he's considering aren't much better. 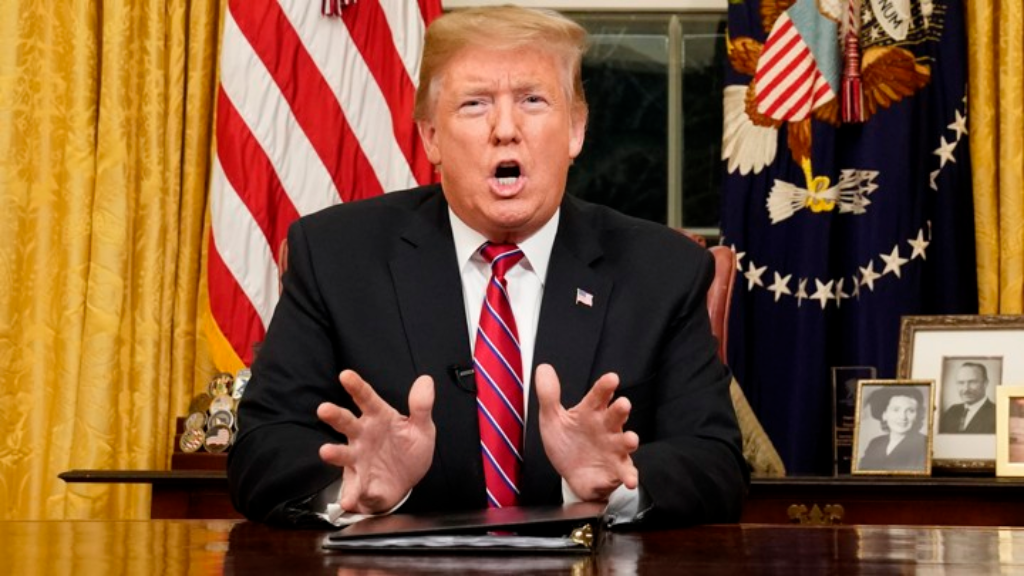 President Trump is apparently backing away from threats to declare a “national emergency” to get his border wall built:

WASHINGTON — President Trump has stepped back from declaring a national emergency to pay for a border wall, under pressure from congressional Republicans, his own lawyers and advisers, who say using it as a way out of the government shutdown does not justify the precedent it would set and the legal questions it could raise.

Mr. Trump, who according to aides has grown increasingly frustrated over the refusal of Democrats to bend and sees the shutdown as a road with no off-ramp in sight, hinted on Friday that the warnings were having an effect.

“What we’re not looking to do right now is national emergency,” he told reporters gathered in the Cabinet Room as the shutdown approached its fourth week. Minutes later he contradicted himself, saying that he would declare a state of emergency if he had to.

As Speaker Nancy Pelosi and Senator Chuck Schumer, the minority leader, have proved immune to Mr. Trump’s threats, the idea of using the president’s constitutional powers to declare an emergency has received close scrutiny in the White House because it would enable Mr. Trump to obtain the $5.7 billion he has sought for construction of a wall without the approval of Congress.

Instead, Mr. Trump would use his authority to transfer funds to the wall that were appropriated by Congress for other purposes. Toward that end, the Army Corps of Engineers has been directed to study whether it can divert about $13.9 billion in emergency aide set aside for Puerto Rico, Florida, Texas and California. And with the money secured, the president could drop his opposition to the appropriations bills whose passage would end the shutdown.

That would allow Mr. Trump to say he had never backed down from his fight with congressional Democrats or abandoned his pledge to build the wall even if the construction became tied up in legal challenges.

Former White House aides, who noted that Mr. Trump did not focus on the wall during the first two years of his presidency, said the optics of fighting for the wall were more important to the president than erecting it.

But opposition has come from many Republican quarters. Some conservatives see it as an unacceptable extension of executive power. Kellyanne Conway, a White House aide, has said it would essentially give Congress a pass. Representative Mike Simpson, Republican of Idaho and a member of the House Appropriations Committee, said it was not clear to him that an emergency declaration would even lead to the prompt reopening of the government.

He called it “a bad escape hatch” that was going to anger many House members.

Mr. Trump’s reluctance is also frustrating allies ginning him up to take action. “If it’s a crisis, treat it like a crisis,” Stephen K. Bannon, the former chief White House strategist, said in an interview. “His best option now is to declare a national security emergency and get on with it.”

On Thursday, Mr. Trump traveled to the border in Texas to dramatize his support for a wall but used a photo-op along the banks of the Rio Grande on Thursday only to repeat his familiar arguments for building it. He sidestepped the issue when Sean Hannity, the Fox News host, asked him in an interview that night to detail what a national emergency would look like.

But Mr. Trump, who allies said was eager to spend time at his Mar-a-Lago club in Florida and resented the advice of aides to deliver an Oval Office address and travel to Texas on Thursday, is left with few good options.

As he searches for a way to end the political stalemate with Democratic lawmakers, Mr. Trump is finding himself boxed in, in a familiar position when it comes to immigration issues. Former aides say that is because he conflates legal and policy issues with public relations campaigns and does not anticipate an endgame.

This news contradicts reports yesterday and Thursday that seemed to indicate that the President was leaning toward the idea of a “national emergency” due to the fact that there clearly didn’t seem like there was any way that Congress was going to give in on border wall funding. According to those reports, Trump was leaning this way even though legal advisers were advising against it due to the fact that such a move was most likely illegal and because of the bad precedent it would set. Notwithstanding that, Trump seemed to be leaning toward the idea that taking such action would allow him to ‘save face’ by saying he did something to try to get the wall built but had been stopped by the courts. In the meantime, he could have signed legislation reopening the government that didn’t fund the border wall. In that manner, I suppose, he could both claim to his supporters that he had done what he could for the wall and singlehandedly reopened the government, even though it’s obvious that he was the reason the government closed. Given the fact that polling is making clear that the public is blaming the President for the shutdown, it’s unlikely that they’d be stupid enough to fall for this kind of spin.

This leaves the second option that the President is apparently considering, the idea of diverting money allocated for other purposes to pay for the border wall. As I explained yesterday, this would also seem to be a violation of the law:

As for the second proposal to use money that Congress has allocated to the Defense Department to build the wall, even though Congress has not explicitly organized such an action. As with the idea of a “national emergency,” while there are arguably some provisions of law that might permit this, the balance of Federal law says exactly the opposite, For example, this action would seem to directly violate long-standing Federal laws regarding the Federal budget such as the Federal Budget And Accounting Act and the Congressional Budget And Impoundment Act of 1974. The first law basically restates the Constitutional fact that Congress controls the purse strings and that the Executive Branch cannot spend money in a manner not authorized by Congress. The second strengthened those laws and limited the ability of the President to do things like refuse to spend allocated funds or use funds in an unauthorized manner. What all this means is that this move, which would fall short of declaring a “national emergency” would also end up in Court and would likely result in any action taken by the Trump Administration put on hold for the foreseeable future.

The fact that something isn’t necessarily legal has never stopped the President before. We’ve seen this in connection with his Muslim Travel Ban, his efforts to ban transgender troops from serving in the military, his efforts to punish so-called ‘sanctuary cities, his family separation and asylum policies on the southern border, and his efforts to end the Deferred Action for Childhood Arrivals (DACA) program, this President has seen his policy proposals blocked, scaled back, or completely barred by the Federal Courts on a scale unseen by previous Administration. In several cases, these decisions have even come from Judges appointed by previous Republican Presidents and, in at least one case, by Trump himself. Invariably, the President’s public reaction has been to attack the judiciary just as he attacked the Mexican-American Judge presiding over the Trump University during the campaign. I suppose one can respond to this by saying that Trump at least has not responded to these decisions by refusing to comply with them as his hero Andrew Jackson did, but the only honest response one can give to this is “yet.”

At the same time the White House considers its options, the shutdown continues. As James Joyner noted this morning it has now become the longest shutdown in American history, surpassing even the twenty-one day shutdown of December 1995-January 1996 during the first year of joint rule by President Clinton and a Republican Congress. In that case, the shutdown ended in no small part due to the fact that Republicans began to realize that they were being harmed by the ongoing crisis. Now, we have polls showing that the President is suffering politically but he doesn’t seem to care. Instead, he is thriving on the opposition and seems to be settling in for a prolonged battle even though he has no weapons left.