The President's job approval numbers remain at historic lows, while a growing number of Americans say that the country is headed in the wrong direction. 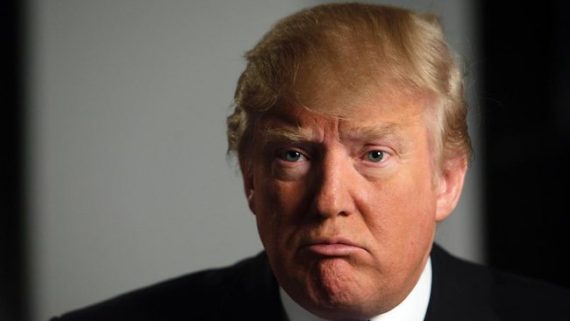 A new poll from CNN and SSRS shows that President Trump’s job approval numbers continue to be at historic lows for a newly elected President, and also shows that a growing number of Americans view the country as being on the wrong track:

President Donald Trump’s approval rating holds steady in a new CNN poll conducted by SSRS, but that overall stability belies declining views on how things are going in the country today.

Overall, 37% of Americans approve of the way Trump is handling the presidency, 57% disapprove — virtually identical to his marks in late September. But the percentage who say things in the country are going well has fallen from 53% in August to 46% now, about the same as after Trump’s tumultuous first weeks in office.

And as the White House pushes for congressional action on tax reform and takes steps to modify Obamacare on its own, few say they think Trump’s policies will bring about positive change. Around four in 10 (38%) say the policies Trump has proposed will move the country in the right direction, 56% say the wrong direction. Back in March, that was a near-even split.

And as the White House pushes for congressional action on tax reform and takes steps to modify Obamacare on its own, few say they think Trump’s policies will bring about positive change. Around four in 10 (38%) say the policies Trump has proposed will move the country in the right direction, 56% say the wrong direction. Back in March, that was a near-even split.

Looking at the poll averages we see similar numbers as Trump remains without question the most unpopular newly elected President in the history of modern polling. In the RealClearPolitics average, for example, Trump’s job approval average stands at 38.8% approve and 55.8% disapprove. Trump’s numbers on the economy are better, with approval standing at 45.6% and disapproval at 45.1%. This, no doubt, is a reflection largely of the fact that the economy at large remains in relatively good shape even though the Trump Administration has not really implemented its economic agenda in any significant respect that could be said to be responsible for the shape of the economy. On foreign policy, meanwhile, Trump’s numbers are more consistent with his numbers overall, with an approval average of 37.8% and a disapproval average of 54.8%. The President’s numbers at Pollster, meanwhile, are largely the same with an average of 38.6% approval and 56.8% disapproval. Looking deeper into those numbers, the President remains nearly universally negative among Democrats and universally positive among Republicans. Among Independents meanwhile, Trump’s numbers continue to be worse than among Americans as a whole. Finally, the FiveThirtyEight approval average, which is weighted based on factors such as pollster reliability, stands at 38.1% approve and 55.6% approval.

As the RealClearPolitics chart shows, Trump’s numbers remain near historic lows even for his Presidency notwithstanding a small uptick in the wake of the aftermath of Hurricanes Harvey and Irma: 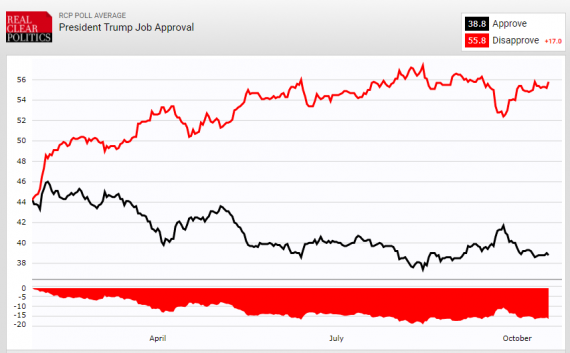 As noted above, the CNN/SSRS poll also shows a high number of people viewing the country on the wrong track, and RealClearPolitics shows this number as standing at 28.6% who believe the country is on the right track, and 63.6% saying it is on the wrong track. To be honest though, as the chart below shows, this number has been in negative territory for the past seven years: 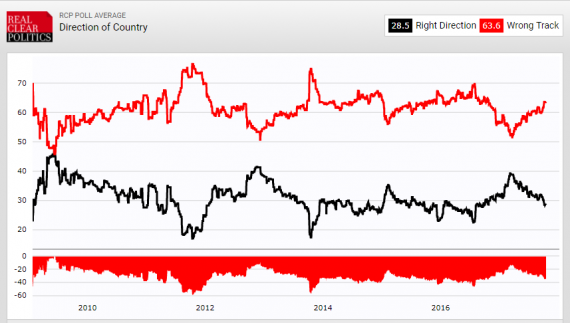 The CNN poll also shows Trump getting negative reviews for his handling of the aftermath of Hurricane Maria, which ravaged the U.S. Virgin Islands and Puerto Rico nearly a month ago:

President Donald Trump’s approval rating for handling the federal government’s response to recent hurricanes has dropped 20 points in the aftermath of Hurricane Maria, according to a new CNN poll conducted by SSRS.

In mid-September, 64% of Americans said they approved of Trump’s handling of the US hurricane response. That finding followed his administration’s handling of hurricanes Harvey and Irma, which hit the US mainland in late-August and September. Now, as many Puerto Ricans remain without access to clean water or electricity nearly a month after Maria hit, just 44% say they approve.

In the weeks since Maria devastated the island, Trump’s response has vacillated between criticism and praise. He has used his Twitter account to contend that local officials aren’t doing enough to help and has threatened to withdraw assistance from the island entirely. At other times, he has praised the work of the military and first responders there.

In a Rose Garden news conference Monday, Trump mixed praise for the federal government’s response to the situation with criticism of local efforts, saying that ample supplies had reached the island but were held up by distribution issues.

The poll found Trump’s numbers on this score have dipped across party lines. His ratings are down 9 points among Republicans, 22 points among independents and 25 points among Democrats.

In the September poll, majorities of men and women and majorities across age groups approved of the way Trump was handling the Hurricane response. Now, among women, just 36% approve, while only 32% of those under age 45 approve.

The impact of the hurricanes can be seen in the RealClearPolitics chart above, where there was actually a slight improvement in Trump’s numbers in the wake of Irma and Harvey, where the Federal response was widely seen as being a success. The reality has been far different in the response to Maria, though, and while part of that is due to the fact that both U.S. territories are only accessible by air and sea it’s also been the case that Trump has largely been far more dismissive regarding the Federal response in these areas than he was in electorally important states like Texas and Florida and has been outwardly hostile toward authorities on the ground in Puerto Rico such as the Mayor of San Juan. Just yesterday, for example, Trump said that the military shouldn’t have to deliver food on the ground in Puerto Rico and said that he’s staying on top of the situation in the Virgin Islands by talking to their President, who, of course, is Trump himself. All of this has helped contribute to an air of callous disregard for more than four million American citizens who will be dealing with the ramifications of Maria for years to come.

Trump’s new numbers are largely consistent with what we’ve seen since the beginning of his Presidency. Unlike any other previous President, Trump has had exceedingly negative job approval numbers for the past eight months of his Presidency and, as we get closer to the one-year anniversary of his election, it doesn’t appear that this trend will improve anytime soon. What impact that has for legislative agenda items such as tax reform and the midterm elections next year is unclear, but it’s unlikely to be good news.

Update: This post was updated to include updated figures from the RealClearPolitics average from what was indicated this morning, and to include an updated version of the RCP chart for Presidential Job Approval.