In what seems to be clear violations of the Foreign and Domestic Emoluments Clauses, the President is seeking to enrich himself and his family,

The United States is scheduled to hold the G-7 Summit in 2020 and, as he had hinted earlier in the year, President Trump has decided after what the White House claims to have been an exhaustive nationwide search, to hold the meeting at a resort owned by, you guessed it, Donald J. Trump:

President Trump has awarded the 2020 Group of Seven summit of world leaders to his private company, scheduling the summit for June at his Trump National Doral Miami golf resort in Florida, the White House announced Thursday.

That decision is without precedent in modern American history: The president used his public office to direct a huge contract to himself.

Trump’s Doral resort — set among office parks near Miami International Airport — has been in sharp decline in recent years, according to the Trump Organization’s own records. Its net operating income fell 69 percent from 2015 to 2017; a Trump Organization representative testified last year that the reason was Trump’s damaged brand.

Now, the G-7 summit will draw hundreds of diplomats, journalists and security personnel to the resort during one of its slowest months of the year, when Miami is hot and the hotel is often less than 40 percent full. It will also provide a worldwide spotlight for the club.

“What about Doral?” Trump asked aides earlier this year, according to acting White House chief of staff Mick Mulvaney, who announced the move. Mulvaney said a nationwide search conducted by Trump’s administration led to the conclusion that the president was right.

“Doral was far and away the best physical facility for this meeting,” he said. The administration examined 10 sites before choosing this one, according to Mulvaney, who then quoted an anonymous site selection official who he said told him, “It’s almost like they built this facility to host this type of event.” Mulvaney did not say what other sites were vetted — just that they were all worse.

Trump’s decision to select his own resort as host of the international gathering is a sign that he is becoming more brazen about flouting criticism from Congress and shattering ethical norms that have been observed by previous presidents with regard to separating the duties of their office from their financial well-being.

It also appears to signal the collapse of promises made by the president and Eric Trump, his son and the day-to-day leader of Trump’s businesses, at the start of the Trump presidency — when they pledged to create separation between the president’s private business and his new public office.

“I will be leaving my great business in total,” Trump said as president-elect in 2016.

“There are lines that we would never cross, and that’s mixing business with anything government,” Eric Trump said in 2017.

The Trump Organization on Thursday said it was “honored” to have been chosen by its owner, the president, for this event.

“We are excited to have been asked to host the 2020 G-7 Summit at Trump National Doral,” the company said in a statement.

But the company did not respond to questions about how much money it will make off this event.

Eric Trump did not respond to questions about how much the president’s company would charge the United States or foreign governments during the event. He also did not respond to questions about whether the Trump Organization would ask taxpayers to pay for upgrades to the site. One obvious concern for next year: There will be at least eight world leaders coming to this event, but at present Doral has just two “presidential suites.”

The State Department, which typically helps organize these events, declined to comment.

Mulvaney said the White House was not going to release information about the selection process.

“If you want to see our paper on how we did this, the answer is absolutely not,” he said.

There are some reports that the resort would be providing the rooms “at cost,” which makes it sound like the Trump Organization would at least technically not be making a profit off the event. However, this is not entirely clear. For one thing, as many travel industry analysts who have spoken to reporters have noted, business at Doral, one the lesser-known of Trump-branded properties in Florida, has been down in recent years. In addition to that, the G-7 Summit would occur during the summer months which for understandable reasons are typically a low-point for resorts in the Miami area. Reporter David Farenthold, for example, pointed out on Twitter last night that the months of June through August are typically slow months at Doral:

Even if the resort choose to discount its ordinary rates to host the summit, something that may not be permitted at least in connection with the White House and its accompanying support team according to Federal law, it would still be generating revenue off of space that is usually empty at the time and therefore not making money. Therefore, hosting the summit at Doral would be of significant financial benefit to The Trump Organization and, since he never fully divested himself from his various businesses, the President of the United States himself.

Quite obviously, this decision brings to question issues under the Emoluments Clause, which have received more attention in the past two and a half years than they did during the previous 230 years since the drafting of the Constitution. Generally speaking, an “emolument” is defined as ” the returns arising from office or employment usually in the form of compensation or perquisites.” The Constitution, though, distinguishes between emoluments from foreign sources and those from domestic sources. This decision, though, implicates both of the Emoluments provisions of the Constitution as well as other aspects of the law.

The first provision, known as the “Foreign Emoluments Clause,” is found in Article I, Section Nine, Clause 8 of the Constitution and prohibits any Federal official from receiving without Congressional consent “any present, Emolument, Office, or Title, of any kind whatever, from any King, Prince or foreign State.” This clause is implicated, of course, due to the fact that hosting the G-7 means that Doral would be accepting money from the representatives of no less than six foreign nations, and possibly more if representatives from non-member nations are invited as has happened in the past. With respect to this provision, it is worth noting that the clause does say that Congress can consent to the foreign emolument, but it doesn’t specify what form that consent must take. In any case, the provision means that Trump needs to get Congressional permission to hold the G-7 Summit at any of his properties whether its Doral, Mar-A-Lago, or anywhere else.

The second clause, known as the “Domestic Emoluments Clause,” can be found in Article II, Section 1, Clause 7 and states that the President “shall not receive within that Period any other Emolument from the United States or any of them.” This clause is relevant to the Doral decision since the United States Government, through the office of the President, would be giving money to a property operated by the President’s business. Unlike the Foreign Emoluments Clause, there is no escape clause whereby the transaction could be approved by Congress.

In addition to these Constitutional provisions, there are other potential violations of the law here that should be investigated. This includes the question of whether or not there was ever an objective search process, whether bids for hosting were considered from other locations and how those bids might have been handled, and whether or not the laws governing the solicitation and awarding of government contracts were followed.

Mulvaney’s comments notwithstanding, the idea that Doral was the “best” location for holding the Summit is utterly absurd. In the years since the first G-7 Summit in 1975, the United States has hosted the summit six separate times at locations that have included Puerto Rico, Williamsburg, Houston, Denver, Sea Island (Georgia), and Camp David. (Source) The idea that there is nowhere else in the United States that would be suited for a summit of this type is therefore absurd and laughable. Additionally, the fact that the White House is refusing to discuss the process that was undertaken to search for a location for the summit other than the one that happened to be mentioned by the President at the end of the last G-7 summit leads one to believe that there was no legitimate selection process at all.

In addition to Congressional investigations, there are likely to be lawsuits surrounding this decision in addition to those that have already been followed. This would join several other lawsuits that have been filed under these clauses. This includes one brought in Federal District Court in New York by a restaurant owner who claimed that the President’s continued ownership of the Trump hotel in Washington, among other properties, damaged his business. That suit was dismissed for lack of standing but reinstated by the Second Circuit Court of Appeals. Another suit was brought in Maryland by the State of Maryland and the District of Columbia. That suit was also dismissed for lack of standing and the current status of the case, which could be appealed to the Supreme Court, is unclear. Finally, there is a case brought by more than 200 Members of Congress and Senators in the U.S. District Court in Maryland. In October of last year, a Federal Judge rejected arguments that the Congressional Plaintiffs lacked status and the case remains open at the District Court level. This situation, meanwhile, this case seems to me to be exactly the kind of international and domestic self-dealing that the Emoluments Clauses were meant to address. 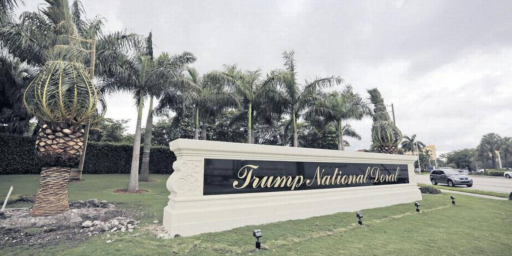