The U.S. War in Afghanistan sounds disturbingly similar to the Soviet one. 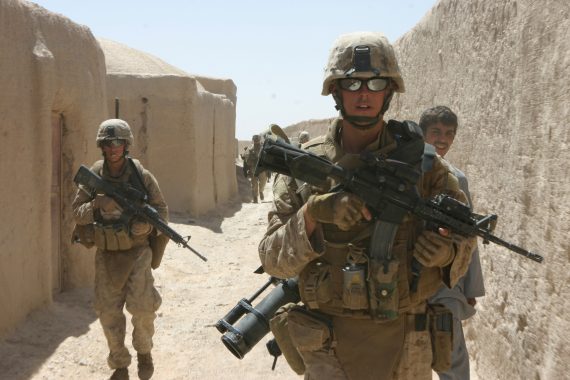 Glenn Greenwald wrote on Friday about a Washington Post story on the number of young Afghan fighters who are resisting efforts to divert them from a life of war:

KABUL — The teenage insurgents spend their days learning to make shoes and bookshelves, listening to religious leaders denounce the radical interpretation of Islam they learned as children.

But when they return to their cells at Kabul’s juvenile rehabilitation center, the boys with wispy beards and cracking voices talk only of the holy war from which they were plucked and their plans to resume fighting for the Taliban.

“They bring us here to change us,” said Nane Asha, in his late teens. “But this is our way. We cannot be changed.”

As the Taliban presses its efforts to recruit teenage fighters, Afghan officials and their international backers have crafted a program to reintegrate the country’s youngest insurgents into mainstream society. But that ambition is coming up against the intransigence of the teens, who say they would rather be on the battlefield.

“We’ll fight against America for a thousand years if we have to,” said Ali Ahmad, 17, sitting at a desk that has hearts and Koran verses scratched in the wood. “Jihad is the duty of every Muslim.”

Before joining the insurgency in their early teens, the fighters were students, part-time shopkeepers and farmhands, mostly living in the Pashtun-dominated regions of southern and eastern Afghanistan. Some say their parents supported the decision to take up arms. Others left home without warning, disregarding the wishes of relatives and heeding what they call a religious and moral obligation.

Here at the detention center, they live alongside a large group of teens found guilty of crimes unrelated to terrorism. Often, young Taliban members are described as desperate rather than ideological, but the 30 teenage fighters here appear undeterred and unrepentant, and they vow strict adherence to the group’s creed.

“We tell them, ‘You could be a mullah or a tailor or a carpenter.’ But they come here with a misinterpretation of the Holy Koran stuck in their mind. It can be hard to erase that,” said Shah Abbas Bashardost, who works with the boys.

“If we can’t get through to the kids, who can we rehabilitate?” Bashardost said.

Reintegration is at the heart of U.S. and Afghan government strategies to wind down the war, with schooling and employment being offered to coax fighters away from the insurgency. Juvenile offenders seemed a sensible starting point in that campaign, because many assumed they would be easier to win over than adults who have spent years, or even decades, waging war.

In the next few years, reintegration programs such as the one at the Kabul juvenile center — which is run by Afghans but bolstered by foreign supporters, including the United States — are expected to take shape at prisons across the country. But the disappointing results at the Kabul facility reflect the challenges facing the campaign.

To summarize: our invasion and occupation is what enables the Taliban to recruit massive numbers of Afghan teenagers into their cause.  And now, we have to stay until we either kill all the people who hate us and want us gone from their country or propagandize deradicalize them into meekly accepting our presence.  Once there are no more Afghans left who want us gone, then we can leave.  For those of you who have been cynically claiming that this war has no discernible purpose other than the generalized benefits of Endless War for political officials and the Security State industry, now you know.

At least we can now see the very important purpose of the war in Afghanistan: we stay until there’s nobody left who hates us and wants us gone, then we triumphantly depart.

Strong language indeed, but I don’t think Greenwald is very far off.  Our current strategy in Afghanistan, which envisions turning security over to the Afghans in the near future, assumes that the Taliban threat will be eradicated or reduced at some point, or that the long sought goal of peace talks between the Taliban and the Kabul Government will bear fruit. The reintegration programs exemplified by the prison profiled in the Times piece are supposed to be an important part of the strategy. Training young Taliban fighters to have productive careers, it is hoped, would one way to persuade them to abandon the armed struggle many of them took up when they were barely teenagers. In this particular case, it clearly doesn’t seem to be working. That highlighted quote above from 17 year old Ali Ahmad could just as easily have been something said by another teenager during the height of the Soviet war in Afghanistan. Teaching them a skill isn’t going to deter them from this fight.

We entered Afghanistan with one mission; to crush al Qaeda and, by extension, the Taliban government that was harboring them. We accomplished that mission in relatively short order. The Taliban Government collapsed within weeks, and those members of al Qaeda who weren’t captured or killed in the initial months of fighting quickly scattered elsewhere. As we learned in May, that “elsewhere” was primarily Pakistan, the nation where Khalid Shiekh Mohammed was captured, and Osama bin Laden as killed.  In fact, it’s fairly clear that the Bush Administration’s obsession in the years after 9/11 with attacking Iraq, a nation that had nothing to do with the terror attacks that killed 3,000 of our citizens, diverted both attention and resources from the hunt for al Qaeda members. Perhaps if we hadn’t engaged in a hasty, foolish, and mistaken military adventure in Iraq, we would’ve been able to crush the remaining elements of al Qaeda before the scattered to the four winds, or at least brought them to their end sooner.

But that’s an argument for the historians, we’ve got a war to deal with now, and a future to choose. So far, it really doesn’t look like the Taliban are at all interesting in making peace as long as we’re there:

“How much progress are these centers really making?” said Latifullah Mashal, a spokesman for Afghanistan’s intelligence service.

Meanwhile, officials at the juvenile center are looking for reasons to be hopeful — or, short of that, to explain their lack of success.

“We are concerned about whether they will go back to the Taliban,” said Aziza Adalatkhwah, the center’s director. “But, ultimately, it depends on the child and on how much they love their county.”

In a country where loyalty is based more on tribe than nationhood, that seems like putting hope in a patriotism that doesn’t exist.

Our mission in Afghanistan today has nothing to do with al Qaeda. Instead, we’re propping up a corrupt government led by a man who very clearly cheated his way through the last two national elections. We’ve said that U.S. troops would start to leave the country this year, but it’s clear that an American force of some size will remain in the country until at least 2024 if the war planners have their way. This despite the fact that the American people are more supportive of immediate withdrawal than at any time in the past.   The Afghan people aren’t even sure why we’re there. There’s no sign that the Karzai government will be any more stable or popular with the Afghan people three years from now than it is today. And now, as if we had to ask, we have it straight from the Taliban’s mouth that they’re willing to fight as long as it takes. That’s not a fight we ought or need to be engaging in. It’s time to end this folly before we end up regretting as much as the Soviets came to regret their own misadventure in the Hindu Kush.