Yes, The Shutdown Is Hurting The Republican Party More Than Obama And The Democrats

There's no denying it now. The GOP is being harmed by the events in Washington far more than the President and Democrats in general.

Before the government shutdown, there were several polls that seemed to suggest that Republicans would get most of the blame if the government actually did shutdown at the end of September. Since that shutdown occurred, the polls have seemed to confirm that prediction, although there has also been some indication that voters are nearly equally frustrated with all the players involved and that what they’d really like to see is for everyone involved to sit down and negotiate an end to the twin fiscal crises facing the nation. A new Gallup poll, however suggests that the GOP is taking a far bigger hit than Democrats are, at least for the moment:

WASHINGTON, D.C. — With the Republican-controlled House of Representatives engaged in a tense, government-shuttering budgetary standoff against a Democratic president and Senate, the Republican Party is now viewed favorably by 28% of Americans, down from 38% in September. This is the lowest favorable rating measured for either party since Gallup began asking this question in 1992.

These findings come from a Gallup poll conducted Oct. 3-6 that followed the Oct. 1 partial government shutdown after lawmakers in Washington were unable to pass a spending plan for the federal government.

More than six in 10 Americans (62%) now view the GOP unfavorably, a record high. By comparison, nearly half of Americans (49%) view the Democratic Party unfavorably. Roughly one in four Americans see both parties unfavorably.

As always, it’s helpful to see this in a visual form, so here’s a chart showing party favorability going back to 1992: 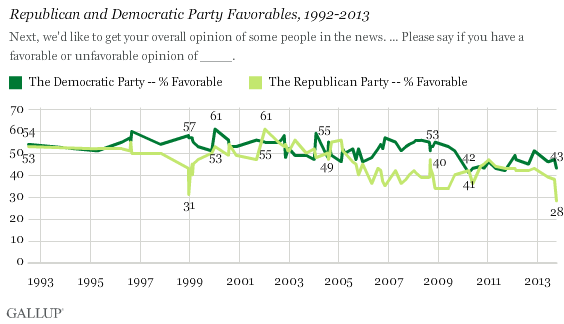 And here’s the unfavorability chart, also going back to 1992: 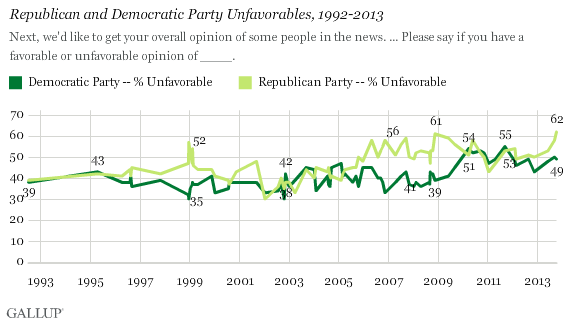 There are several things worth noting here. First of all, the GOP’s favorability number is now at the lowest point its ever been in the past twenty-one years. The one time the number came close to where it’s at now looks to be in the 1998-1999 when the party got caught up in the Clinton Impeachment fiasco as well as the internal battles in the House of Representatives that led to the ouster of Newt Gingrich as Speaker of the House.  The unfavorable number is now roughly at the same place it was in the wake of the Bush 43 Administration and the 2008 financial crisis. Interestingly, the party doesn’t seem to have suffered significantly in the wake of the shutdowns in late 1995 and early in 1996. During that time period, the party’s numbers remained relatively stable and didn’t differ significantly from those for Democrats, which may be one reason why the GOP didn’t suffer significantly at the ballot box in 1996 elections, at least not on the Congressional side.

To be fair, it’s worth noting that Democrats have also suffered a drop in favorability, and they are nowhere near being in as good a position as they were in the late 90s. However, they’ve experienced far less erosion in support than the GOP has and are actually near the lowest level on unfavorability that they’ve seen since the 2010 elections. President Obama, meanwhile, is indeed experiencing something of a dip in job approval — a new Associated Press poll has his job approval at only 37%, for example, but based on the RealClearPolitics average, his numbers have actually improved over the past several weeks. So, while everyone in Washington seems to be suffering to some extent in the polls, the GOP seems to be suffering the most.

John Podhoretz addresses this fact in his column today at The New York Post:

Yes, Democrats look bad. Yes, Obama is probably doing himself no favors by saying he won’t negotiate when the public wants politicians in Washington to work together.

But Republicans look considerably worse. And for the Right, the Republican Party is the only game in town.

This is what my fellow conservatives who are acting as the enablers for irresponsible GOP politicians seem not to understand. They like this fight, because they think they’re helping to hold the line on ObamaCare and government spending. They think that they’re supported by a vast silent majority of Americans who dislike what they dislike and want what they want.

I dislike what they dislike. I want what they want. But I fear they are very, very wrong about the existence of this silent majority, and that their misperception is leading them to do significant damage to the already damaged Republican “brand.” (Forgive me for making use of that horribly overused term, but it’s the only one that fits.)

They’re right not to assign special glory or power to a political organization and to hold ideas above party. But here’s the condundrum: There is only one electoral vehicle for conservative ideas in the United States — the Republican Party.

It’s one thing to refuse to waste your time buffing and polishing the vehicle so that it looks nice and pretty; that’s what political hacks do, and ideologues have every right to disdain such frippery.

But if, in the guise of making the vehicle function better, you muck up the engine, smash the windshield, put the wrong tires on it and pour antifreeze in the gas tank, you are impeding its forward movement. You’re ruining it, not repairing it.

Podhoretz is largely correct here. By signing on to a strategy that was clearly destined to fail, not having an obvious backup plan, and then forcing the government into shutdown mode while insisting that the original strategy was still the basis for further negotiations, the GOP has largely lost the political battle so far. Yes, as Podhoretz notes, Democrats and the President are likely going to take a hit over the refusal to negotiate as we get closer to the debt ceiling deadline, however it’s beginning to look like they’re going to take much less of a hit than the GOP will. More importantly, they have far more “slack” to give up in the polls than the GOP does. Democratic favorability remains relatively good and, while President Obama’s job approval remains negative, that number is far less important to his political future now that he doesn’t have to worry about running for reelection. This puts him in the position of having far different incentives than President Clinton did during the 95/96 shutdowns when he was still recovering from the bruising his party took in 1994 while having to look ahead to a reelection bid in 1996. President Obama can’t afford to let his job approval reach Bush 43 levels, obviously, because he’d be an immediate lame duck. However, he can afford to let the numbers slip a little bit, especially if his political opposition is doing far worse than he is.

As I’ve noted before, it’s always possible that the political winds may shift as these twin crises go on and that the GOP won’t be as damaged as current numbers seem to suggest. However, the current trends seem exceedingly clear and those kinds of trends in public opinion are difficult to reverse. Moreover, in order for it to reverse at all, the GOP is going to have to get much, much better at its messaging and its strategy. So far, there’s no sign of that happening.