Martha McSally and Kyrsten Sinema will end up representing Arizona in the Senate together. 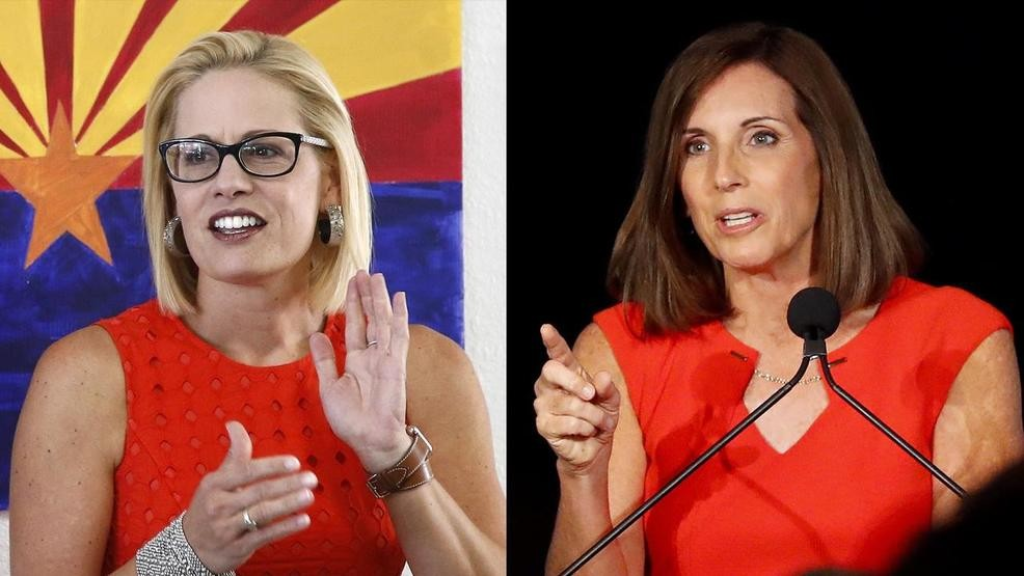 McSally, who lost a close race for Arizona’s other Senate seat this year, will succeed Sen. Jon Kyl (R). Kyl will step down at the end of the year following a brief time in McCain’s seat after McCain’s death in August.

“With her experience and long record of service, Martha is uniquely qualified to step up and fight for Arizona’s interests in the U.S. Senate. I thank her for taking on this significant responsibility,” Ducey said in a statement.

Gov. Doug Ducey’s decision to appoint McSally, announced in a statement Tuesday and effective next month, revives her political life less than two months after she narrowly lost therace for the state’s other Senate seat to Democrat Kyrsten Sinema.

It also makes Arizona one of only a handful of states with two women in the U.S. Senate. Prior to Sinema’s election, Arizona had never selected a woman to fill a Senate seat. In prepared statements, Ducey and McSally echoed the same sentiment: an expectation that McSally and Sinema, her 2018 political rival, would work together in the Senate.

Ducey and McSally are scheduled to speak at a joint news conference in Phoenix on Tuesday morning.

In a statement about his selection to The Arizona Republic, Ducey cited McSally’s military background and six deployments to the Middle East and Afghanistan.

“With her experience and long record of service, Martha is uniquely qualified to step up and fight for Arizona’s interests in the U.S. Senate. I thank her for taking on this significant responsibility and look forward to working with her and Senator-Elect Sinema to get positive things done.”

“With her experience and long record of service, Martha is uniquely qualified to step up and fight for Arizona’s interests in the U.S. Senate. I thank her for taking on this significant responsibility and look forward to working with her and Senator-Elect Sinema to get positive things done.”

Sinema, who has assumed the mantle of leader of Arizona’s Democratic Party with her Senate win, is expected to flex her political power to try to help Democrats in 2020 take the seat, which was held by McCain for six terms and the late U.S. Sen. Barry Goldwater, another Republican, before that.

If McSally were to lose again in 2020, it could spark a new round of Republican recriminations.

The prospect of McSally being named to what used to be McCain’s seat in the event that she lost the race for Jeff Flake’s seat has been something that has been openly talked about ever since Governor Ducey appointed Kyl, who had served as a Senator until retiring in 2012, to serve in McCain’s place for the balance of 2018 at least. At the time, Kyl had made it clear that he had no intention of running for the seat when it is up for a Special Election in 2020 and that he would likely resign by the end of 2018. That announcement came last week when Kyl announced that he would be resigning effective December 31st. At that point, attention shifted back to Ducey, who was now required to select a temporary Senator for the second time in a few months. With the results of the race between McSally being fairly close, and McSally getting credit from several sides for what most people saw as a gracious concession after it became clear that Sinema had won the race against McSally.

McSally’s appointment means that Arizona will become one of a handful of states — including California, Minnesota, and New Hampshire — represented by two women. It will also be one of the rare times when a state was represented at the same time by one Senator and another who they had defeated in an election. Other times this has happened include Gordon Smith and Ron Wyden, who had faced each other in a Special Election in January 1996 to replace Bob Packwood in January 1996 with Smith later winning election to Oregon’s other Senate seat in November 1996. Chuck Hagel and Ben Nelson, who served together representing Nebraska after Hagel defeated Nelson in 1996 and Nelson went on to win an election to the state’s other seat four years later, and Slade Gorton and Brock Adams who both represented Washington State for a brief period of time after Adams had defeated Gorton in 1986 and Adams won election to the state’s other seat in 1988.

In any case, McSally will likely technically end up being considered Arizona’s “Senior” Senator, a title that has little actual meaning, if she gets sworn in even a day or two before Sinema. Additionally, McSally will be required to run in a Special Election in 2020 that will decide who fills out the remainder of McCain’s term. There will be another election in 2022, which is when McCain’s current term would have expired had he not died.