Nate Silver reminds us all that, even when it comes to Iowa and New Hampshire, it's much earlier than we think, and that voters are still likely to change their minds.

Notwithstanding the fact that Donald Trump has been leading the Republican field virtually uninterrupted since at least early July, Nate Silver argues that Donald Trump’s poll numbers may not be as formidable as they seem

Lately, pundits and punters seem bullish on Donald Trump, whose chances of winning the Republican presidential nomination recently inched above 20 percent for the first time at the betting market Betfair. Perhaps the conventional wisdom assumes that the aftermath of the terrorist attacks in Paris will play into Trump’s hands, or that Republicans really might be in disarray. If so, I can see where the case for Trump is coming from, although I’d still say a 20 percent chance is substantially too high.

Quite often, however, the Trump’s-really-got-a-chance! case is rooted almost entirely in polls. If nothing Trump has said so far has harmed his standing with Republicans, the argument goes, why should we expect him to fade later on?

One problem with this is that it’s not enough for Trump to merely avoid fading. Right now, he has 25 to 30 percent of the vote in polls among theroughly 25 percent of Americans who identify as Republican. (That’s something like 6 to 8 percent of the electorate overall, or about the same share of people who think the Apollo moon landings were faked.) As the rest of the field consolidates around him, Trump will need to gain additional support to win the nomination. That might not be easy, since some Trump actions that appeal to a faction of the Republican electorate may alienate the rest of it. Trump’s favorability ratings are middling among Republicans (andawful among the broader electorate).

Trump will also have to get that 25 or 30 percent to go to the polls. For now, most surveys cover Republican-leaning adults or registered voters, rather than likely voters. Combine that with the poor response rates to polls and the fact that an increasing number of polls use nontraditional sampling methods, and it’s not clear how much overlap there is between the people included in these surveys and the relatively small share of Republicans who will turn up to vote in primaries and caucuses.

But there’s another, more fundamental problem. That 25 or 30 percent of the vote isn’t really Donald Trump’s for the keeping. In fact, it doesn’t belong to any candidate. If past nomination races are any guide, the vast majority of eventual Republican voters haven’t made up their minds yet.

Silver points out that, notwithstanding the fact that viewership for the primary debates in both parties is higher than it has been in the past and that Internet search traffic for campaign-related news seems to be higher than normal for this point in the cycle, most voters aren’t really paying attention to the race yet, and aren’t likely to for some time yet:

It can be easy to forget it if you cover politics for a living, but most people aren’t paying all that much attention to the campaign right now. Certainly, voters are consuming some campaign-related news. Debate ratings are way up, and Google searches for topics related to the primaries1 have been running slightly ahead of where they were at a comparable point of the 2008 campaign, the last time both parties had open races. But most voters have a lot of competing priorities. Developments that can dominate a political news cycle, like Trump’s frenzied 90-minute speech in Iowa earlier this month, may reach only 20 percent or so of Americans.

In support of his argument, Silver provides two charts that demonstrate voter behavior in recent election cycles. The first shows that Google search traffic related to the campaign didn’t really begin to trend upward until ten weeks before the Iowa Caucuses, and didn’t hit its peak until well after the caucuses were over: 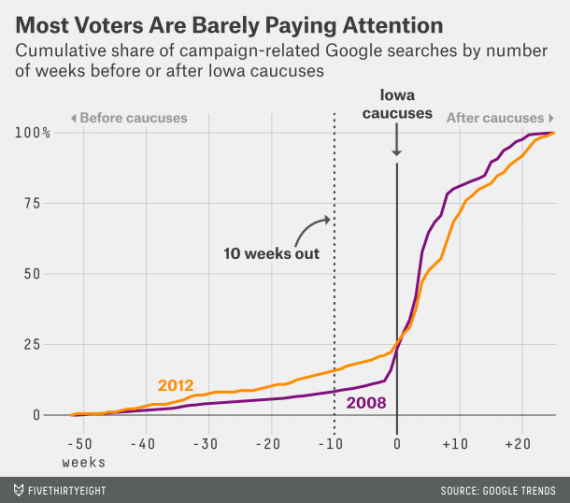 The second shows exit poll data from the last several Iowa Caucuses and New Hampshire primaries that were contested that asked voters when they had finally made up their mind who they would support: 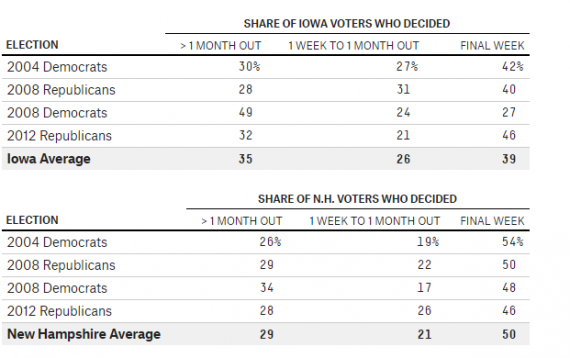 As we can see, in both Iowa and New Hampshire, a significant number of voters in both parties, surely significant enough to influence the outcome of the contest, didn’t decide until inside of a month or less who they were supporting. In the past two election cycles, of course, the Iowa and New Hampshire contests took place in early January right after New Year’s Day. That meant that “one month” before voting started basically meant right after Thanksgiving and during the holiday season, which is basically where we are now. This time around, though, both the Iowa Caucuses and the New Hampshire primary have been pushed back to their more traditional start times of early February, and that one month out roughly coincides with the end of the holiday season. So, instead of being roughly one month away from the start of voting today we stand at roughly nine weeks from the Iowa Caucuses and ten weeks from the New Hampshire primaries. On the Republican side of the aisle there will be two more debates between the candidates before anyone starts voting. That means there is still plenty of time for voter to focus on the race and start to make up their minds, both in Iowa and New Hampshire. In that regard, Silver is right to caution all of us to keep our minds open to the idea that things could change in the Republican race, and that they could change quickly. It’s possible, of course, that voters are behaving differently this time around, that they are more interested in the race earlier than before and that they are making up their mind sooner than they have in the past. In general, though, things like voter behavior tend to be consistent over time so it’s worth keeping these numbers from the past in mind and remembering that the numbers we are seeing now may not be an accurate reflection of how things will turn out when people actually show up to vote in February. Indeed, we already seem to be some of that happening as Ben Carson falls in the polls and candidates like Ted Cruz and Marco Rubio start to rise.

All of that being said, it’s hard to deny that even with the recent movements in the polls, Donald Trump remains firmly ensconced as the leader of the Republican Presidential race. If that continues, and if he’s able to translate that support in the polls to votes at the ballot box in the early primary states, then he isn’t simply going to fade away easily. Both of those are very big “ifs,” of course, and Silver provides reasons to doubt just how strong Trump’s numbers are, but it’s been obvious for awhile that Trump is more than just a flash in the pan and that the predictions of his imminent demise have been made many times only to be debunked down the line. One should be cautious about believing such predictions this time around unless the evidence going forward actually supports the predictions.