More evidence that North Korea isn't living up to the promises it made in Singapore. 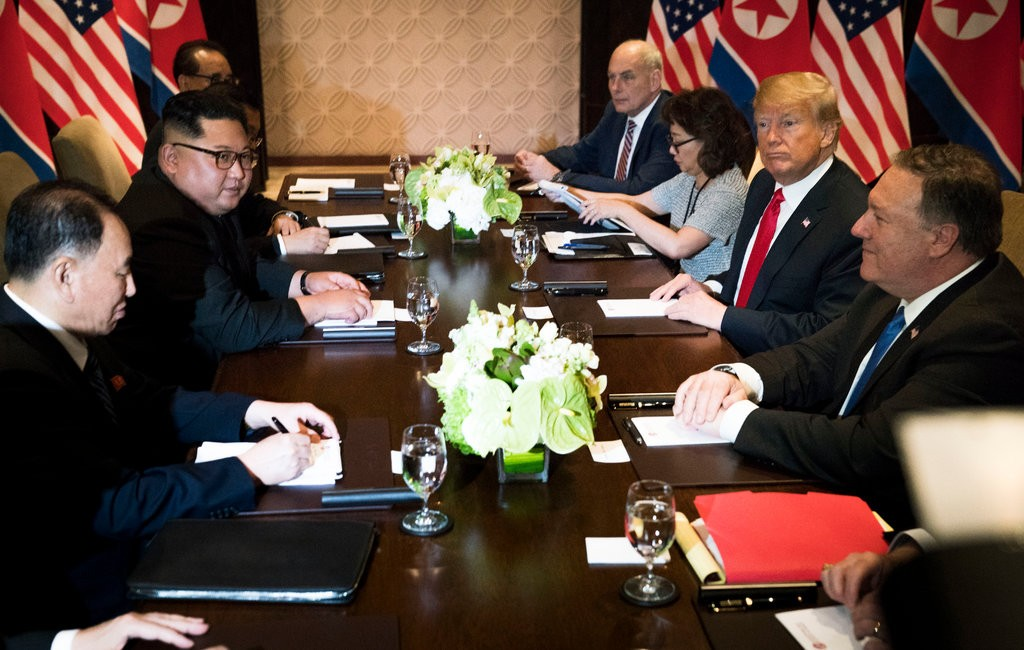 The Washington Post reports that U.S. intelligence agencies have determined that North Korea is working on ways to conceal its nuclear weapons research program at the same time that it is supposedly working on a deal to “denuclearize” with the United States:

U.S. intelligence officials, citing newly obtained evidence, have concluded that North Korea does not intend to fully surrender its nuclear stockpile, and instead is considering ways to conceal the number of weapons it has and secret production facilities, according to U.S. officials.

The evidence, collected in the wake of the June 12 summit in Singapore, points to preparations to deceive the United States about the number of nuclear warheads in North Korea’s arsenal as well as the existence of undisclosed facilities used to make fissile material for nuclear bombs, the officials said.

The assessment stands in stark contrast to President Trump’s exuberant comments following the summit, when he declared on Twitter that “there is no longer a nuclear threat” from North Korea. At a recent rally, he also said he had “great success” with Pyongyang.

Intelligence officials and many North Korea experts have generally taken a more cautious view, noting that leader Kim Jong Un’s vague commitment to denuclearize the Korean Peninsula is a near-echo of earlier pledges from North Korean leaders over the past two decades, even as they accelerated efforts to build nuclear weapons in secret.

The new intelligence, described by four officials who have seen it or received briefings, is based on material gathered in the weeks since the summit. The officials insisted on anonymity to discuss sensitive assessments about a country that has long been one of the most difficult targets for spy agencies to penetrate. Some aspects of the U.S. intelligence were reported Friday by NBC News.

Specifically, the DIA has concluded that North Korean officials are exploring ways to deceive Washington about the number of nuclear warheads and missiles, and the types and numbers of facilities they have, believing that the United States is not aware of the full range of their activities.

Some U.S. intelligence officials have for at least a year believed that the number of warheads is about 65, as reported last year by The Washington Post. But North Korean officials are suggesting that they declare far fewer.

The lone uranium-enrichment facility that has been acknowledged by North Korea is in Yongbyon, 60 miles north of Pyongyang. That site is estimated to have produced fissile material for as many as a couple of dozen warheads.

Meanwhile, the North Koreans also have operated a secret underground uranium enrichment site known as Kangson, which was first reported in May by The Washington Post. That site is believed by most officials to have twice the enrichment capacity of Yongbyon. U.S. intelligence agencies became aware of the nuclear facility in 2010.

Meanwhile, the Trump Administration appears to continue to think that things are just peachy:

WASHINGTON — President Trump’s national security adviser said on Sunday that North Korea could dismantle all of its nuclear weapons, threatening missiles and biological weapons “in a year,” a far more aggressive schedule than the one Secretary of State Mike Pompeo outlined for Congress recently, reflecting a strain inside the administration over how to match promises with realism.

The statements by John R. Bolton, the national security adviser and historically a deep skeptic that North Korea will ever fully disarm, came as Mr. Pompeo prepares to make his third trip to North Korea late this week.

Mr. Pompeo will arrive in Pyongyang with a proposed schedule for disarmament that would begin with a declaration by North Korea of all its weapons, production facilities and missiles. The declaration will be the first real test of the North’s candor, amid increasing concern that it may be trying to conceal parts of its nuclear program. But Mr. Bolton, appearing on CBS’s “Face the Nation,”

said Sunday that, nearly three weeks after the North Korean leader, Kim Jong-un, and President Trump met in Singapore, no such declaration has arrived.

Advisers to Mr. Pompeo, both outside the government and inside the C.I.A., which he used to direct, have cautioned him that North Korea will not give up its arsenal of 20 to 60 weapons until the last stages of any disarmament plan — if it gives them up at all. Many of the plans they have given him call for the North to halt production of nuclear fuel — at a moment that there are signs of increased production — but do not insist on dismantling weapons until Mr. Kim gains confidence that economic benefits are beginning to flow and that the United States and its allies will not seek to overthrow him.

It is an approach fraught with risk, and runs contrary to what Mr. Bolton, before entering the government, and Mr. Trump had said the North must do: dismantle everything first, and ship its bombs and fuel out of the country. If the North is permitted to keep its weapons until the last stages of disarmament, it would remain a nuclear state for a long while, perhaps years.

The effort to put North Korea on a schedule is particularly urgent because there is no evidence the Singapore summit meeting has produced tangible results, despite Mr. Trump’s tweeted proclamation that “there is no longer a Nuclear Threat from North Korea.” Even Mr. Bolton seemed to distance himself from that assertion on Sunday.

Worrisome signs about North Korea’s commitment to disarmament have been accumulating. In Singapore, Mr. Trump said the North was destroying a major missile-engine test site, but the known sites are still standing, untouched, according to satellite photographs. Work is proceeding on a new nuclear reactor that would dramatically increase the North’s ability to produce plutonium, a potent fuel for an atom bomb.

And C.I.A. officials are watching to see whether the North reveals in the declaration a covert plant suspected of enriching uranium, the other main fuel for nuclear arms.

The plant is known as Kangsong, according to a report on the secretive facility by the Institute for Science and International Security, a Washington group that tracks the spread of nuclear arms. The fact that the United States knew about the plant was a closely guarded secret until a few months ago, one former government official with access to the intelligence said. The official predicted that the North would have to admit having the plant, or watch negotiations fall apart.

The Kangsong plant is suspected of housing many thousands of centrifuges — tall machines that spin at supersonic speeds to concentrate the rare form of uranium used in bombs. It has been running for years, and the group noted that it “could have made a substantial amount of weapon-grade uranium, complicating further efforts to dismantle and verify denuclearization.”

In his television appearance, Mr. Bolton set out a schedule that intelligence officials have already warned is unrealistic. Mr. Pompeo, he said, “will be discussing this with the North Koreans in the near future, about, really, how to dismantle all of their W.M.D. and ballistic missile programs in a year.”

He added, “If they have the strategic decision already made to do that and they’re cooperative, we can move very quickly.”

Bolton’s prediction that complete disarmament could take place inside of a year is, of course, utterly absurd. Even assuming that the North Koreans are serious about the promises they made in Singapore, the amount of detail that needs to be worked out to bring about any kind of final deal is likely to take years of negotiations between the two nations, and will most likely have to involve other nations such as South Korea and China. The best analogy for what lies ahead can be found in the negotiations between the United States and the Soviet Union and the negotiations that lead to agreements such as SALT I and II, the INF Treaty, and START. In each of those cases, the treaty that was ultimately agreed to was the result of a long period of negotiations at lower diplomatic levels. In that respect, the meeting that took place in Singapore was simply the start of a process that will take years to work out. It may succeed, or it may fail utterly, but the idea that it will be concluded within a year is utterly absurd.

These reports, of course, come in the wake of the report late last week that North Korea was ramping up activity at one of its secret nuclear research sites. This report would seem to confirm that, and, of course, it comes as no real surprise that the North Koreans are apparently actively trying to deceive the United States and the world. They’ve done this before, and it was inevitable that they would try to get away with it again. As for the supposed promises that they made at the Photo Op Summit in Singapore, as I’ve noted before every promise they made in Singapore is the same as ones that they have made during previous nuclear-related negotiations such as those that took place in 1985, 1992, 1994, 2002, 2003, 2005, 2006, 2008, 2010, 2011, 2012 and 2016. Each of those times, the promises proved to be empty, and the DPRK continued to advance its research programs with respect to both nuclear weapons and ballistic missiles. There’s every reason to believe that they’ll do so again and that, at any rate, they have no intention of giving up their existing nuclear weapons stockpile regardless of what President Trump and his Administration may want us to believe. Additionally, as I’ve pointed out several times in the past the United States and North Korea clearly have very different ideas of what “denuclearization” means and nothing that happened at the summit changed those different understands. Maybe things will ultimately turn out differently this time and we’ll see some real progress toward a lessening of tensions on the Korean Peninsula rather than the largely symbolic and easily reversible steps that we’ve seen take place so far. That’s not going to happen overnight, though, and it’s going to have to take a more realistic view of the grounds on which the United States and North Korea and form a viable agreement than the Trump Administration appears to have at the moment.