Just over one year after President Trump's foolish and ill-informed decision to withdraw from the Trans-Pacific Partnership Canada has stepped in to rescue the deal. 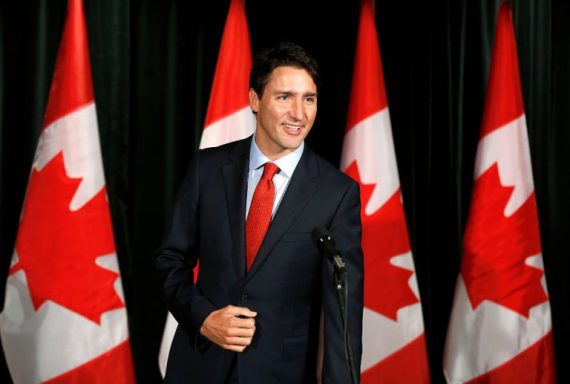 Just over one year to the day after President Trump officially withdrew the United States from the Trans-Pacific Partnership trade agreement, Canadian Prime Minister Justin Trudeau announced that Canada had reached an agreement with the rest of the TPP members to formalize a new partnership that includes our neighbor to the north:

In the statement, Trudeau said that “strengthening Canada’s economic relationship with countries in the large and economically fast-growing Asia-Pacific region to support prosperity and create jobs for our middle class is a priority for Canada.”

He said Canada had always said it would agree to a deal that is in Canada’s best interests.

“To that end, Canada has been working very hard on the new CPTPP, from spearheading the first meetings of officials in May 2017 to proposing several suspensions and changes to secure better terms for Canadians throughout this burgeoning region,” he said in the statement.

He added that Canada has shown it “can and will work hard to set the terms of trade so the middle class can compete and win on the world stage.”

According to The Associated Press, those involved are hoping to sign an agreement by early March.

Canada announced on Tuesday that, after a series of negotiations, it will join 10 other countries in signing a revised Trans-Pacific Partnership in March.

The deal, renamed Comprehensive and Progressive Agreement for Trans-Pacific Partnership, includes a renegotiated arrangement on autos with Japan and the suspension of intellectual property provisions that had been a concern for Canada.

The combined gross domestic product of the “CTPP ex-U.S.” agreement amounts to $12.6 trillion, or 15.8 percent of world GDP. The TPP agreement, which collapsed after the United States pulled out, would have totaled $32 trillion in GDP, or 40 percent.

Still, the new deal without the United States will create a counter-balance to China’s increasing economic dominance of the region.

“If we are going to push back against the anti-trade tendency in globalization that will leave us all worse off, we have to put the concerns and the well-being of our ordinary citizens at the center of what we are negotiating, and that is what 11 of us have been able to do with the CPTPP,” Trudeau said.

“We are also very much open to more trade deals involving more people as long as it is in the best benefit of all of our citizens,” he said.

And from the Canadian Broadcast Corporation:

Canada has agreed to a resurrected version of the Trans-Pacific Partnership and will sign on to the deal.

The deal, renamed the Comprehensive and Progressive Agreement for Trans-Pacific Partnership, comes after talks in Japan this week with the 11 countries still committed to the deal.

“We are happy to confirm the achievement of a significant outcome on culture as well as an improved arrangement on autos with Japan, along with the suspension of many intellectual property provisions of concern to Canadian stakeholders,” said International Trade Minister Francois-Philippe Champagne in a statement.

“Canada has always said that we would only agree to a deal that is in Canada’s best interests.”

Canada was seen as the main holdout during talks in Vietnam last November. Prime Minister Justin Trudeau sparked an international controversy when he didn’t sign an agreement in principle, arguing Canada had concerns about the pact’s culture and the automotive sectors

A Canadian official with close ties to the deal said Champagne spent the weekend, and into Monday night, speaking to his TPP counterparts on the phone.

Trudeau’s announcement has aroused some small degree of controversy in Canadian business circles, specifically including the Canadian auto sector, dairy interests, and some union leaders who have expressed concerns that the agreement would be detrimental to their interests and undermine ongoing negotiations with the United States and Mexico regarding potential changes to the North American Free Trade Agreement (NAFTA). Notwithstanding these objections, though, it seems fairly clear that this agreement will be to the long-term benefit of the Canadian economy, as well as the economy of the other ten members of the agreement. As a general rule, lower trade barriers are always a positive development overall even if they lead to disruptions with regard to specific industries and that will no doubt be the case here. Additionally, the fact that Canada stepped in to save a partnership that many had assumed was dead after Trump fulfilled his campaign promise to withdraw from the agreement and that this would inure to the benefit of China and its economic interests. While the Canadian economy is nowhere near the size of the United States, it is large enough that its membership in the group would seem to at least offer some hope that the new TPP will be something of a bulwark against the expansion of Chinese influence and economic leverage against its neighbors. Additionally, the fact that Canada is poised to open its markets to these Asian nations could potentially provide secondary benefits to the United States thanks to Canada’s membership in NAFTA. (Unless, of course, President Trump foolishly decides at some point to abandon NAFTA.) Finally, the fact that TPP has been effectively saved leaves open the possibility that a future American President with a far better understanding of the benefits of more open international trade could seek to bring the United States into the agreement, something that would be in our national security and economic interests and would be a strong boost to the American economy.

Canada’s move here is another example of how the rest of the world is reacting to the radical changes that have occurred in the manner in which the United States approaches the rest of the world in the year since Trump became President. Over this time, the President has withdrawn from the Trans-Pacific Partnership and the Paris Climate Accords, and recognized Jerusalem as Israel’s capital notwithstanding the outstanding issues regarding its status and decided to decertify Iranian compliance with the 2015 nuclear deal. On his two biggest foreign trips during his first year in office to Europe and Asia, During both trips, both his behavior and his rhetoric have come across in the worst possible respect and he has managed to most especially irritate people living in the nations that have historically been some of America’s most important allies. Most recently, of course, he referred to immigrants from African nations and from other nations such as Haiti as coming from “shithole” countries and that he would prefer more immigration from nations such as Norway, which is obviously a predominantly Caucasian country. The result are things such as what we see with Canada’s move here. The rest of the world is moving ahead, and leaving the Trumpidian United States behind. The damage this is likely to do to