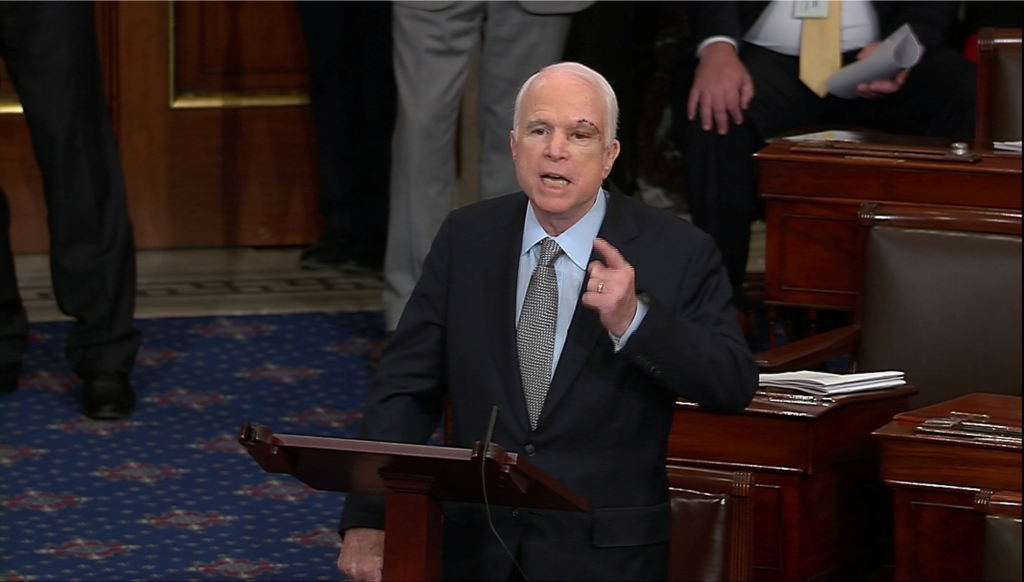 Thirteen months before he died, John McCain delivered what would be his final speech to the United States Senate and it was a message that we would all stand well to listen to during this weekend when we say our final farewells to the Senate:

In a Washington moment for the ages, Sen. John McCain claimed the role of an aging lion to try to save the Senate, composing a moving political aria for the chamber and the country that he loves.

With a deep-red scar etched from his eyebrow to his temple, the legacy of brain surgery less than two weeks ago, McCain beseeched his colleagues to forsake political tribalism and restore the chamber to a spirit of compromise that had helped forge national greatness.

McCain had flown directly from his home state of Arizona to cast a crucial vote to allow a debate on a health care reform drive to proceed, but he warned that he would not vote to pass the divisive bill in its current form.

“Our deliberations today … are more partisan, more tribal … (than) at any time than I can remember. They haven’t been overburdened by greatness lately,” he said, offering a lesson of civics and civility as his fellow senators unusually packed the chamber and watched from their desks with rapt attention.

The 80-year-old McCain had been welcomed back to the Senate for the first time since his devastating brain cancer diagnosis with a standing ovation, following an outpouring of goodwill toward him from across the nation. He was mobbed by colleagues, Republicans and Democrats alike, in a rare show of shared bipartisan sentiment.

It was a speech that harkened back to a forgotten and perhaps mythical age of compromise and comity in the Senate, reminding the nation of the bedrock importance of its founding political principles at a moment of extreme national political stress and recrimination.

True to his reputation, McCain scolded Democrats and Republicans alike, but he also admitted that at times he had erred himself by prizing political victories above the common good. He said both sides had erred by trying to remake health care on a purely partisan basis, and without open debate.

“I don’t think that is going to work in the end, and it probably shouldn’t,” he said in remarks that will be tough to swallow for his own party’s leadership.

McCain bemoaned the tone of modern politics, suggesting that wild partisanship was paralyzing the country’s political institutions and tearing the country apart.

“Stop listening to the bombastic loudmouths on the radio and the television and the Internet. To hell with them. They don’t want anything done for the public good — our incapacity is their livelihood. Let’s trust each other. Let’s return to regular order.”

And at a time when President Donald Trump is sowing political discombobulation in Washington with his unorthodox and disruptive leadership style, McCain reminded his colleagues they are a check on executive power.

“We are not the President’s subordinates,” McCain said. “We are his equals.”

McCain’s sermon was lent added poignancy and urgency by his illness. He was diagnosed with a malignant glioblastoma tumor, an aggressive form of cancer last week, days after an operation to remove a blood clot from his brain.

You can read the text of the speech and watch the video here:

In a similar spirit, in the days after he passed away, his family released a public statement that McCain had obviously drafted in anticipation of his death,

“My fellow Americans, whom I have gratefully served for sixty years, and especially my fellow Arizonans,

Thank you for the privilege of serving you and for the rewarding life that service in uniform and in public office has allowed me to lead. I have tried to serve our country honorably. I have made mistakes, but I hope my love for America will be weighed favorably against them.

I have often observed that I am the luckiest person on earth. I feel that way even now as I prepare for the end of my life. I have loved my life, all of it. I have had experiences, adventures and friendships enough for ten satisfying lives, and I am so thankful. Like most people, I have regrets. But I would not trade a day of my life, in good or bad times, for the best day of anyone else’s.

I owe that satisfaction to the love of my family. No man ever had a more loving wife or children he was prouder of than I am of mine. And I owe it to America. To be connected to America’s causes — liberty, equal justice, respect for the dignity of all people — brings happiness more sublime than life’s fleeting pleasures. Our identities and sense of worth are not circumscribed but enlarged by serving good causes bigger than ourselves.

‘Fellow Americans’ — that association has meant more to me than any other. I lived and died a proud American. We are citizens of the world’s greatest republic, a nation of ideals, not blood and soil. We are blessed and are a blessing to humanity when we uphold and advance those ideals at home and in the world. We have helped liberate more people from tyranny and poverty than ever before in history. We have acquired great wealth and power in the process.

We weaken our greatness when we confuse our patriotism with tribal rivalries that have sown resentment and hatred and violence in all the corners of the globe. We weaken it when we hide behind walls, rather than tear them down, when we doubt the power of our ideals, rather than trust them to be the great force for change they have always been.

We are three-hundred-and-twenty-five million opinionated, vociferous individuals. We argue and compete and sometimes even vilify each other in our raucous public debates. But we have always had so much more in common with each other than in disagreement. If only we remember that and give each other the benefit of the presumption that we all love our country we will get through these challenging times. We will come through them stronger than before. We always do.

Ten years ago, I had the privilege to concede defeat in the election for president. I want to end my farewell to you with the heartfelt faith in Americans that I felt so powerfully that evening.

I feel it powerfully still.

Do not despair of our present difficulties but believe always in the promise and greatness of America, because nothing is inevitable here. Americans never quit. We never surrender. We never hide from history. We make history.

The letter was read on McCain’s behalf by Rick Davis, the Senator’s longtime aide, and campaign manager:

As I’ve said in other posts the past several days, I was often critical of Senator McCain in the past, and there remain positions he took and decisions he made that I disagreed with strongly and passionately. At the same time, though, it was always clear that when he took these positions and these actions he did them believing them to be in the best interests of his country, his state, and his constituents. When he ran for President in 2008, he did so under the slogan “Country First,” and while I was quite critical of that campaign and did not vote for him in the end, looking back it’s apparent to me that these weren’t just words for him, they were a way of life. What else can you say about a man who, given the chance to put an end to years of suffering as a prisoner of war in North Vietnam, chose instead to stay behind until all of his fellow prisoners were released? Or a man who, after he came home, dove headfirst into another form of sacrifice in the world of politics where he spent the next thirty-five years of his life? A son of Admirals who could have easily found a desk job somewhere that paid a lot more money and required a lot less work and separation from family and loved ones. Even when you disagree with the political positions someone holds, you have to respect a person for that alone.

I’ve already made note of some of Senator McCain’s other enduring legacies, such as the moment on the 2008 campaign trail when he stepped back from the populist horde that the Republican Party was turning into and spoke of his opponent in a bitterly fought Presidential race in a manner that we seldom here today, and one we must assuredly will never hear from the current occupant of the Oval Office. I’ve noted the role he played as the voice of moral authority during the debate over the use of torture in the War on Terror. These words from the Senator, both last year in what would be his final public speech and in the final message for his fellow Americans, are an addendum to all that. They speak to an America that it’s hard to believe ever really existed, but one which we’re going to have to find our way back to if we’re going to recover from what our politics and our culture have turned into, and what they promise to turn into unless we do turn back. If there’s any more fitting way of honoring what the Senator stood for, I can think of nothing better than taking heed to these words and pushing back against what some people are trying to turn us into. It won’t be an easy fight, to be sure, but then it has to be easier than what Senator McCain endured for his country. If we don’t do something like that, then all of these words we’re hearing in praise of his legacy will just be whispers on the wind.