Despite a court ruling that says otherwise, the Trump White House appears prepared to once again revoke the press pass of CNN reporter Jim Acosta. 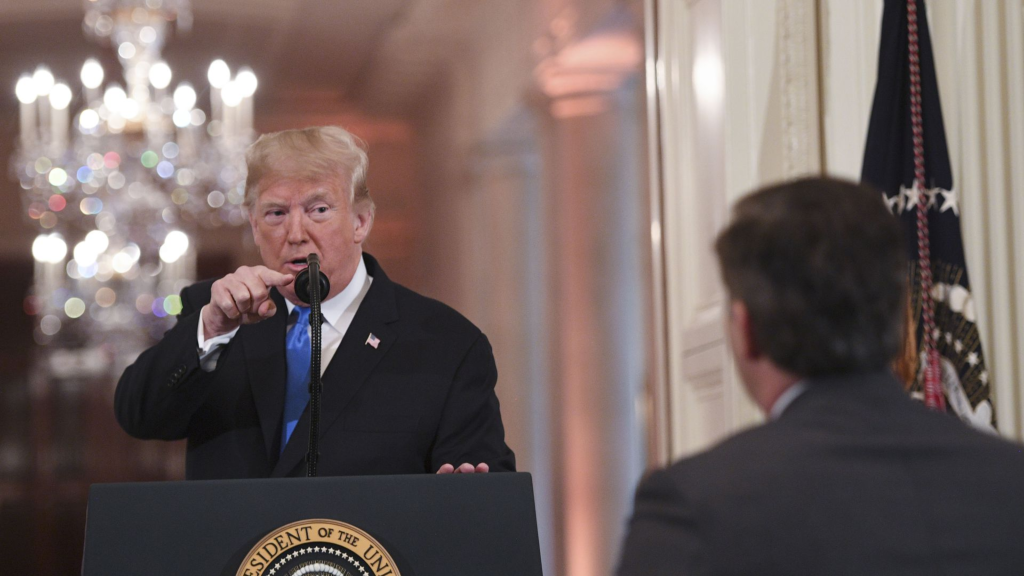 Just days after suffering a legal setback in Federal District Court, the Trump Administration appears ready to tempt fate again in its ongoing, irrational, and vindictive war against the media by announcing earlier today that it intends to once again revoke the press credentials of CNN White House Correspondent Jim Acosta when the Temporary Restraining Order that was entered last week expires:

The White House told CNN correspondent Jim Acosta it still plans to revoke his security credentials, CNN said Monday, showing the Trump administration is not backing down in its battle with the network.

CNN’s outside counsel Ted Boutrous on Monday asked the court for an emergency hearing the week after Thanksgiving in hopes the judge would reinstate Acosta’s “hard pass” — the security badge that lets White House reporters freely enter and exit the grounds — for a longer period of time while the lawsuit moves forward. The letter from the White House was included in court documents filed Monday.

“The @WhiteHouse is continuing to violate the First and Fifth amendments of the Constitution,” CNN said in a statement posted to Twitter Monday. “These actions threaten all journalists and news organizations. @Acosta and CNN will continue to report the news about the White House and @realDonaldTrump.”

Acosta had his press credentials suspended following a fiery exchange with President Donald Trump in a news conference on Nov. 7, during which he resisted when a White House intern attempted to take a microphone out of his hands. The White House initially claimed, using an apparently altered video as evidence, that he inappropriately touched the intern. Officials later changed their rationale to say that Acosta had breached unwritten standards of decorum for the press.

The Trump administration is planning to once again take away CNN chief White House correspondent Jim Acosta’s credentials, a sign that the administration is digging in for a fight after a federal judge last week ordered Acosta’s hard pass temporarily reinstated.

US District Judge Timothy Kelly on Friday granted CNN’s request for a temporary restraining order while the network’s lawsuit goes forward, finding that the White House likely violated Acosta’s constitutional right to due process in how it took away his pass. Later that evening, the White House sent Acosta a letter saying they had made the “preliminary decision” to suspend his hard pass, according to a copy included in court papers filed by CNN on Monday morning.

The White House gave Acosta until Sunday at 5 p.m. to respond, and said that after that point, the decision would become final, meaning he would lose his hard pass again once the White House was no longer bound by court order.

Given the latest communication from the White House, CNN is asking Kelly to speed up the schedule for the next phase of the case, which involves the network’s request for a preliminary injunction, which would be a more permanent form of relief — and an order that the White House could appeal if it wanted to escalate the fight.

The White House initially cited Acosta’s physical contact with the intern as one of the main reasons they were taking away his credentials, but later shifted to more broadly accusing Acosta of disrupting the press conference. In the Nov. 16 letter to Acosta, deputy chief of staff for communications Bill Shine and press secretary Sarah Huckabee Sanders wrote that there were no written guidelines for press behavior at press conferences because there had been a “widely shared understanding” that reporters would ask a single question unless a follow-up was allowed, and would yield the floor after the question was answered.

“On November 7, 2018, you failed to abide by these basic, widely understood practices,” Shine and Sanders wrote to Acosta.

CNN’s lawyers responded to the White House’s letter on Sunday afternoon. Ted Boutrous, who argued for CNN last week, wrote to the Justice Department lawyers handling the case that, “To say the least, the letter is a disappointing response to the court’s decision and our attempts to resolve the matter amicably.”

In a letter to Shine and Sanders, Boutrous wrote that the “ex post facto application of vague, unarticulated standards” was the same type of due process violation that led to Kelly’s order last week.

As a legal matter, there is some logic to the White House’s position. The Temporary Restraining Order that Judge Kelly entered last week is set to expire fourteen (14) days after it was entered, which is generally the time limit set for TRO’s in Federal Court. The typical procedure in the meantime would ordinarily be that the parties would file further pleadings in Court on the issue of whether or not the TRO should be converted into an injunction that would prevent the White House from revoking Acosta’s credentials while the case is pending, at least with regard to any alleged behavior that occurred prior to the hearing. Instead of proceeding in that manner, though, the White House appears to be taking the position that it can simply wait until the TRO has expired and, presuming that it has not yet been converted into a preliminary injunction, then revoke the hard pass yet again even if there is no new basis upon which to base such a decision.

Additionally, as I noted in my post on the subject last week, Judge Kelly based his decision on essentially two provisions of the Constitution. To begin with, while he left for another day the First Amendment/Freedom Of The Press issues raised by the White House’s actions he did find that there are First Amendment issues at stake here. Specifically, he found that while there is not necessarily a First Amendment right for a reporter to be granted access to the White House, once the White House began doing so it created a First Amendment issue that means, among other things, that such access cannot be denied in an arbitrary and capricious manner. In this respect, Kelly relied upon a 1977 case that stands for the proposition that the granting or revocation of a White House press pass raises issues under the Due Process Clause of the Fifth Amendment, meaning that the decision to grant or revoke a press pass must be accompanied by some semblance of due process, which includes not only an opportunity for the reporter in question to be made aware of the basis for the decision and be heard in rebuttal of the accusations against him but also the existence of clear pre-existing rules and procedures that would allow reporters to be aware of what is expected of them and the circumstances under which they could lose access to the White House. It would also appear to mean that those rules, once they are established (which has not happened yet), cannot be applied retroactively. This would mean, at the very least, that the White House could not draft rules today and apply them to something Acosta or any other reporter is accused of doing two weeks ago.

Understandably, CNN and Acosta are not taking this latest threat from the White House lying down. They have filed a motion with Judge Kelly asking for an emergency hearing on the matter early next week (the Court is unlikely to have time to schedule anything before the Thanksgiving break, which effectively begins on Wednesday) to bring this matter before the Court. At that point, the question will be whether Judge Kelly will either extend the length of the TRO to some point further out to allow the parties time to fully address the issue of granting a more permanent preliminary injunction or to simply go ahead and grant the preliminary injunction on the spot.

Whatever may happen at that hearing next week, this move by the White House does not strike me as very smart. Rather than accepting that and moving to the preliminary injunction phase of the proceedings, the Administration appears intent on pretending as if last week’s rulings never really happened and that they are free to act as they wish notwithstanding what the Judge may say. While that would effectively be true if the T.R.O. expires before the Court can rule on a preliminary injunction request can be ruled on, the spirit of Judge Kelly’s decision, and the message that it should have sent to the Administration is clear. You can’t simply revoke someone’s press pass without due process, and it’s clear that there is no due process in this case. Judge Kelly may be new to the bench and, ironically enough, a Trump appointee, but in my experience, this is the kind of game playing by a party that tends to annoy Judges and cause them to give the benefit of the doubt to the opposition, which in this case would be Acosta and CNN. Of course, given the contempt which this President has shown for the Rule of Law and Freedom of the Press as a candidate and an officeholder, I suppose it’s not surprising at all even if it is a pretty dumb thing to do.

Update: The Washington Post is reporting that the White House and CNN have settled their dispute via an agreement under which Acosta’s press pass will be fully restored and CNN will withdraw its lawsuit. No further details at this time.