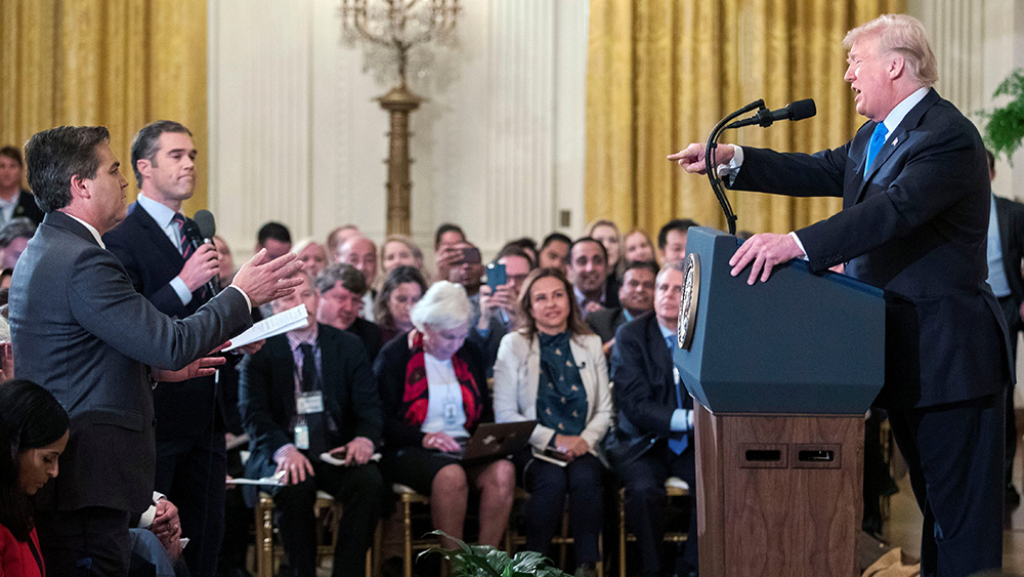 A Federal District Court Judge in Washington, D.C. who just happens to have been appointed by President Trump has ruled in favor of CNN and its White House Correspondent, finding that the White House improperly revoked Acosta’s press pass in the aftermath of a contentious Presidential Press Conference the day after the 2018 midterms:

A federal judge on Friday directed the White House to restore the press credentials of Jim Acosta of CNN, a win for media advocates and news organizations in a major legal test of press rights under President Trump.

The revocation of Mr. Acosta’s press badge, which grants access to the White House grounds, came after a testy exchange with Mr. Trump during a news conference last week. But the episode grew into a legal showdown over journalists’ ability to report on a president who regularly denigrates their work as “fake news.”

The ruling, from Judge Timothy J. Kelly of Federal District Court in Washington, was viewed as a victory for journalism and a timely reminder of press freedoms that advocates say have recently come under threat.

CNN had argued that Mr. Acosta’s free speech and due process rights were violated, warning that a president should not be allowed to pick and choose who reports on him. The administration contended that presidents enjoy broad discretion to bar journalists from the White House, and that Mr. Acosta’s barbed questioning and refusal to yield his microphone was boorish and disrespectful.

Judge Kelly’s decision came in response to CNN’s request for an emergency order restoring Mr. Acosta’s credential. Other legal issues raised by the suit, CNN v. Donald J. Trump, which the network filed this week, were expected to be addressed in subsequent hearings.

A federal judge on Friday ruled in favor of CNN and reporter Jim Acosta in a dispute with President Trump, ordering the White House to temporarily restore the press credentials that the Trump administration had taken away from Acosta last week.

In a victory for the cable network and for press access generally, Judge Timothy J. Kelly granted CNN’s motion for a temporary restraining order that will prevent the administration from keeping Acosta off White House grounds.

The White House revoked the reporter’s press pass last week after a heated exchange between him and President Trump and a brief altercation with a press aide at a news conference. Acosta, CNN’s chief White House correspondent, is the first reporter with a so-called hard pass to be banned.

CNN sued President Trump and other White House officials on Tuesday over the revocation. Kelly’s ruling was the first legal skirmish in that lawsuit. It has the immediate effect of sending Acosta back to the White House, pending further arguments and a possible trial. The litigation is in its early stages, and a trial could be months in the future.

Kelly, whom Trump appointed to the federal bench last year, handed down his ruling two days after the network and government lawyers argued over whether the president had the power to exclude a reporter from the White House.

He also agreed with CNN’s argument that the White House did not provide due process. He said the White House’s decision-making was “so shrouded in mystery that the government could not tell me . . . who made the decision.” The White House’s later written arguments for banning Acosta were belated and weren’t sufficient to satisfy due process, Kelly said.

CNN has argued that the ban on Acosta violated his First Amendment rights because it amounts to “viewpoint discrimination” — that is, the president is punishing him for statements and coverage he didn’t like. The network has also said the action violates Acosta’s Fifth Amendment right to due process because his exclusion follows no written guidelines or rules and has no appeal or review procedures.

CNN had requested “emergency” relief from the judge, arguing that Acosta’s rights were being violated with each passing hour.

Until the White House’s action last week, no reporter credentialed to cover the president had ever had a press pass revoked.

In the hearing that Judge Kelly held on Wednesday, the lawyer for the government argued that the President had the right to ban the reporter from the White House at any time for any reason just like the White Hosue excludes reporters from interviews in the Oval Office. He then went on to make the rather absurd argument that Acosta could report on the President by watching him on television or calling sources in the White House from his office at CNN’s Washington offices. He also suggested that CNN itself would not be injured by the denial of Acosta’s hard pass because it had at least 50 other reporters and photojournalists credentialed at the White House. In rebuttal, the attorneys for CNN argued that the decision to ban Acosta from the White House was arbitrary and capricious and that barring Acosta from the White House restricted their ability to do their jobs because the need access to the premises to meet with sources, report on the off-camera “gaggles” that have replaced regular White House Press Briefings in the Trump White House. as well as shutting them out of discussions with press aides and other White House officials. All of this meant, the attorneys for CNN and Acosta pointed out, that banning a reporter from the grounds does irreparable harm to their ability to do their jobs.

In his ruling from the bench, which presumably will be reduced to writing and released soon, Judge Kelly focused primarily on the procedural aspects of the case, which are governed by a 1977 case titled Robert Sherrell v. H. Stuart Knight 569 F.2d 124 (D.C. Cir., 1977). That case involved a reporter who was denied a press pass to cover the White House on repeated occasions beginning in 1966 due to the claim by the Secret Service that the reporter, who wrote for various left-wing publications, was somehow a threat to the President. In its ruling, the D.C. Circuit Court of Appeals held that a White House press pass cannot be denied or revoked unless the party making the decision gave the reporter in question some form of due process, which includes not only some kind of review process but also the establishment of rules and procedures governing the granting and revocation of such passes. In this case, Judge Kelly noted that the Trump Administration not only didn’t give Acosta an opportunity be heard regarding the fate of his hard pass but that it had utterly failed to establish the existence of any sort of standard governing when and how a pass can be revoked. Additionally, Kelly noted that both in its filings this week and in the hearing on Wednesday the White House could not even definitively state who ultimately made the decision to revoke Acosta’s hard pass. Based on all of this, Kelly ruled, CNN and Acosta had made out a sufficient case that they were likely to prevail on the merits and that they would be irreparably harmed if the Temporary Restraining Order were denied.

It’s important to note that Judge Kelly’s ruling here is a limited one, although it may be all that is needed to resolve this case depending on the position that the White House takes. Judge Kelly did not rule on the First Amendment issues that the CNN and Acosta raise in their Complaint, for example, instead ruling that the lack of due process in and of itself was sufficient reason to grant the request for a TRO and order the at least temporary return of Acosta’s hard pass that grants him access to the White House grounds.  Theoretically, perhaps, this means that the White House could seek to create some set of rules and procedures and then review Acosta’s case at a later date. Even if they don’t do that, though, the remaining issues in the case are still likely to be litigated unless the parties end up settling the matter. Ideally, that would happen via an informal meeting between Acosta, the White House Press Secretary and/or Communications Director, and representatives of CNN in which the parties would come to some sort of understanding. In the meantime, the White House would be free to develop standards and procedures that would govern future cases, because it seems unlikely that any court would find that standards adopted in response to this case could be retroactively applied to Acosta or any other reporter with a press pass. Alternatively, of course, the White House could seek to appeal the case, although the Sherrell case would seem to make it clear that any appeal to the D.C. Circuit Court of Appeals would be ultimately unsuccessful. Until then, Acosta will be free to do his job, although neither the Press Secretary nor the President is under any obligation to call on him during a press conference or briefing.

As a matter of law, it seems clear that Judge Kelly had no other choice but to decide this case the way that he did. Though it is more than 40 years old, the Sherrell case remains good law in the District of Columbia Circuit, and it’s clear from the facts that the White House made no effort whatsoever to comply with the requirements of that ruling, assuming they were even aware of it at the time the decision to revoke Acosta’s pass was made. Because of that, any ruling he made in favor of the White House would likely have been overturned on appeal rather quickly. Additionally, the ruling is a rather appropriate rebuke to a President who has referred to the press as the “enemy of the people” on many occasions and who has by referred to members of the media as ”sick people” who “don’t like our country,” and who are “trying to take away our history and our heritage.” He has also applied the epithet ”Fake New” to any news that the President considers to be critical of him or which holds him in a negative light. Recently, Trump admitted that when he said that when he refers to “Fake News” he means any news coverage that is critical of him or his Administration regardless of whether it’s true or not. Finally, the President has admitted that the purpose behind all of these attacks on the media is quite simple in that it is aimed at discrediting the media in the minds of his supporters so that they won’t believe any of the bad news that is reported about his or his Administration. Taken in this light, and even though Judge Kelly explicitly did not rule on the First Amendment aspects of this case in today’s ruling, this was clearly a victory for Freedom of the Press and the First Amendment.