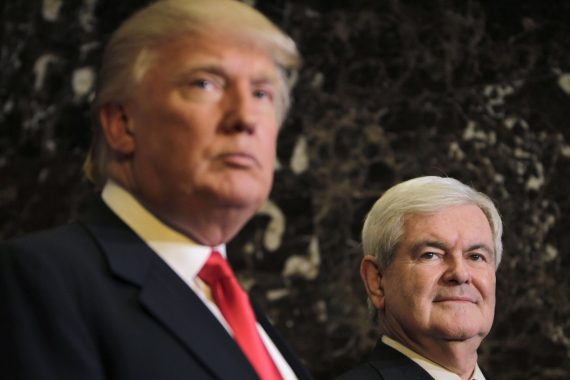 The New York billionaire is considering former House Speaker Newt Gingrich andNew Jersey Gov. Chris Christie, among what he previously described as a short list of possible running mates. Their inclusion was confirmed by people with direct knowledge of the vetting process who spoke on the condition of anonymity because they were not authorized to discuss the situation publicly.

Trump begins the vetting process with less than three weeks before the start of the Republican National Convention, when he said he would publicly unveil his pick.

Gingrich and Christie, who both received vetting paperwork in the last 24 hours, emerged as prominent Trump allies in recent months, even as the presumptive nominee faced deep and sustained skepticism from many GOP leaders. Trump’s relationship with other would-be running mates was badly strained in the bruising Republican primary season, leaving him with a small pool of willing and qualified candidates.

Trump on Thursday acknowledged Christie was under consideration.

“I’m certainly looking at him and I always will. Whether it’s for that or something else,” Trump told conservative radio host Howie Carr. He later described Indiana Gov. Mike Pence as “somebody we respect a lot.”

Pence told Indiana reporters Thursday he hasn’t spoken with Trump in several weeks and referred questions to the Trump campaign, which declined to comment further on the vice presidential search.

While formal vetting did not begin until this week, Trump told The Associated Press last month he’d narrowed his vice presidential list to “a very good list of five or six people.”

His vice presidential pick could be crucial to easing the concerns of Republicans who worry about his lack of political experience, as well as his temperament to be commander in chief. Tapping a political insider would also be a way for Trump to signal a willingness to work with the party establishment he has thoroughly bashed even after emerging as the presumptive nominee.

Many have already been ruled out consideration, including Florida Gov. Rick Scott and primary rival Marco Rubio, a Florida senator seeking re-election.

“I have never sought, will not seek and do not want to be considered for vice president,” Rubio wrote on Facebook.

Trump said last month, and has repeated in the weeks since, that he preferred someone with political experience to help him guide his agenda through Washington.

“I think that’s good for a number of reasons. No. 1, if you win, which hopefully we will. I want help with – you know, I want a hand with legislation, getting things through. And if you bring a business person – we don’t need another business person,” Trump said.

The Washington Post’s Robert Costa and Karen Tumulty are reporting that Gingrich and Christie are the leading candidates to be Trump’s running mate, although there are others being discussed as backups in the event the vetting process uncovers something disqualifying, the candidates rule themselves out, or Trump decides he’s not happy with either choice. I’ve already discussed the pros and cons of a Christie selection, but it’s not surprising that he’s being included on the final last given his relationship with Trump and his record. Similarly, there are a number of arguments for why Gingrich would be a good selection as well.

Like Christie, Gingrich had been identified as being on Trump’s short list several weeks ago, and even then had been identified along with Christie as being in the “top two” when it comes to finalists on Trump’s list, so it’s not entirely surprising that the former Speaker has made it this far in the process.  Admittedly, it is somewhat surprising that the vetting process is only beginning now given that there are less than three weeks left before the Republican convention, but it may well be that this is some sort of second stage of the vetting process and that much of the initial screening has already been completed. Of course, when it comes to political figures in contemporary America, Newt Gingrich would seem to be one of the few people that there isn’t much new to learn about. His extensive record of writing and making sometimes controversial proposals is a matter of public record as is a personal life that rivals Trump in its luridness, with a history of emotional abandonment of his spouses and single-minded pursuit of political power that is hard to match among contemporary politicians. At the same time, there are few people out there who understand better how the political game on Capitol Hill works and, even though it’s been nearly twenty years since he served in Congress, Gingrich’s mastery of the inner workings of Congress as an institution would arguably serve Trump well should a Trump/Gingrich ticket take office in January.

At the same time, this is is Newt Gingrich we’re talking about, and Jennifer Rubin suggests he’d be an even worse choice than Christie:

Gingrich is hardly a model of stability and sobriety. With a penchant for goofy ideas (Who can forget the moon colony?), flamboyant language and pseudo-intellectual pretentiousness, he only compounds Trump’s worst characteristics. To be blunt, Gingrich is also old. At 73, he is older than both Trump and Hillary Clinton. A 70-year-old presidential nominee, one would think, would want someone younger, fitter and more energetic as his VP.

Gingrich is a high-risk candidate, one who might upstage Trump and draw attention with his own controversial comments. He has also been at times candid in criticizing Trump (especially on the latter’s racist comments about Judge Gonzalo Curiel). Mitt Romney shredded Gingrich in the 2012 presidential election, leaving a trail of attack ads and opposition research for Hillary Clinton to update and recycle.

Listen, Trump is not likely to attract restrained, sober men of character to be his running mate. Such people wouldn’t work for Trump and would only highlight Trump’s shortcomings. With Trump widely expected to lose, no pol with a bright future wants to be sullied by a losing campaign and association with the toxic Trump. Only someone with few, if any, political options, at the end of his political career, would be inclined to accept a bid.