Attorneys for the Defendants in the lawsuit filed by Stormy Daniels, including the President, have removed the case to Federal Court and are claiming that Daniels owes $20 million for her alleged breaches of a settlement agreement. 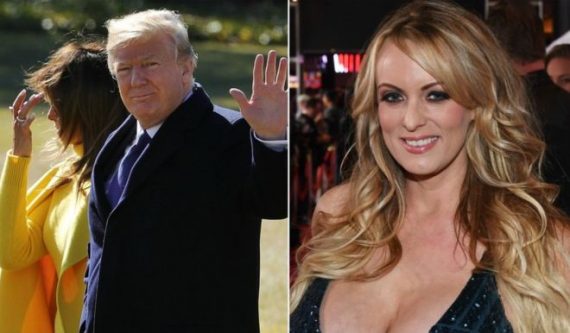 Lawyers for President Trump have responded to the lawsuit filed by adult film star Stormy Daniels to invalidate the settlement agreement entered into in October 2016 by seeking to remove the case to Federal Court and alleging that Daniels is liable for some $20,000,000 in damages under the agreement’s liquidated damages clause:

President Trump’s lawyers filed two motions on Friday in United States District Court in California in a public legal fight that Ms. Clifford, whose stage name is Stormy Daniels, started last week. That’s when she sued to get out of an agreement that she had struck to be paid $130,000 to stay silent about an affair she alleges to have had with Mr. Trump starting in 2006.

Mr. Trump formally joined his legal team’s response to Ms. Clifford’s suit in a motion, filed Friday, to move the case from state court in Los Angeles, where Ms. Clifford filed her claim, to federal court.

Mr. Trump’s reason for asking that the case be moved probably concerns the Federal Arbitration Act, which makes arbitration the preferred forum for resolving many kinds of disputes. Federal courts have applied that law more strictly than state courts, particularly ones in California. Mr. Trump may be hoping that his chances of keeping the dispute in arbitration and out of public view are better before a federal judge than a state one.

Until now, Mr. Trump had kept his distance from the legal wrangling, leaving it to his personal lawyer, Michael Cohen, to take the lead in refuting Ms. Clifford’s claims. And the White House has refused to say how involved Mr. Trump had even been in the initial agreement with Ms. Clifford, signed in October 2016.

When Mr. Cohen brought a temporary restraining order seeking to silence Ms. Clifford in late February, he did so on behalf of a shell company he used to pay her through, not on behalf of Mr. Trump.

Mr. Trump’s name surfaced in one of two motions his legal team filed Friday in Los Angeles. One, in the name of the shell company, Essential Consultants, sought to move the suit to federal court from Los Angeles Superior Court, where Ms. Clifford filed the suit.

The second motion, filed on Mr. Trump’s behalf, states that he joins Essential Consultants in seeking the change of venue and ends with the statement, “Mr. Trump intends to pursue his rights to the fullest extent permitted by the law.”

Representing Mr. Trump in his case was a new lawyer, Charles Harder, who is best known for bringing the Hulk Hogan sex tape case that effectively put the gossip news site Gawker out of business roughly two years ago. Mr. Harder previously represented Melania Trump in a case against The Daily Mail.

Mr. Trump’s team filed the motions one day after news broke that “60 Minutes” was planning to run a segment featuring Ms. Clifford and her lawyer, Michael Avenatti, on March 25. Mr. Trump’s representatives have denied the allegations that he had an affair with Ms. Clifford.

Mr. Avenatti responded late Friday that the president was engaging in “bullying tactics” aimed at moving the case “behind closed doors, outside of public view and scrutiny.”

He seized on the monetary damages the president’s team indicated it was seeking. “The fact that a sitting president is pursuing over $20 million in bogus damages against a private citizen, who is only trying to tell the public what really happened, is truly remarkable — likely unprecedented in our history,” Mr. Avenatti said. He added, “We are not going away and we will not be intimidated by these threats.”

There are two aspects to these new developments, the request to remove the case to Federal Court and the claim for damages allegedly owed by Daniels for breach of the settlement agreement. Additionally, it should be noted that the Notice of Removal was originally filed by Essential Consultants, LLC, the shell company established by Trump attorney Michael Cohen to transmit the payment of $130,000 to Clifford/Daniels in 2016, and was later joined by an attorney purporting to represent Trump, who is referred to in the settlement agreement as “David Dennison.”

With respect to the removal request, this is something that a Defendant in a case filed in a state court lawsuit is generally entitled to do provided that two conditions are met. In some instances, a case can be removed to Federal Court if the claims arise under Federal law. In this case, though, that isn’t the case since the claims asserted in the lawsuit filed by Daniels are raised pursuant to the 2016 settlement agreement and doesn’t appear to directly implicate any Federal law. This means that the lawsuit can only be removed if it falls within the diversity jurisdiction of a Federal District Court, which requires that two conditions are met. The first requirement is that there must be diversity between the Plaintiff and the Defendant, meaning that the Plaintiff and Defendant are residents of different states. Based on the allegations in this case, that appears to be the case. The second requirement is that the amount in controversy in the case must be at least $75,000. This requirement appears to be satisfied by the fact that the amount that was originally paid to Daniels in October 2016 was $130,000, well above the legal requirement.

In addition, the Defendants claim that Clifford/Daniels is liable for up to $20,000,000 in damages due to alleged violations of the settlement agreement pursuant to the provision in the settlement agreement that provides that she would be liable for $1,000,000 in damages for each violation of the confidentiality provisions of the agreement. The pleadings filed by the Defendants don’t go into detail regarding what these violations consist of, but they likely include instances such as the interview that Daniels gave to In Touch magazine back in 2011 which was held back from publication as well as the various media appearances that Daniels has made in the past month or so since this story became public, including the interview with Anderson Cooper that is scheduled to air on March 25th. As the case goes forward, the Defendants would be required to provide proof of such violations of the agreement, of course, and Daniels and her attorney will no doubt try to argue that the liquidated damages provision of the agreement is unreasonable and invalid. Leaving that aside, though, the case will now move forward in Federal Court in California rather than state court.

The Defendants reasons for removing the case to Federal Court are fairly easy to understand. Specifically, it’s likely that they believe that the procedures in a Federal Court are more likely to work to their advantage than those in California’s state courts. For example, it’s far more common for Federal District Court Judges to decide legal claims, and sometimes entire cases, based on the pleadings rather than hearing testimony and argument. This would likely appeal to Trump’s attorneys most specifically since it would limit the extent to which any allegations regarding the relationship between Trump and Daniels would be publicly reported. Second, from the pleadings, it seems likely that the Defendants will seek to enforce the arbitration provisions of the October 2016 agreement. In that regard, the Defendants would want to invoke the provisions of the Federal Arbitration Act and are relying on the fact that Federal Courts have been generally more sympathetic to such defenses than state courts have been. Forcing the case into arbitration, of course, would mean that any proceedings and filings in this matter would be secret and might never be made public.

All of this comes, of course, just a day after we learned that the 60 Minutes interview with Daniels would air on March 25th and that, according to the allegations of the attorney representing her, that Daniels was threatened in some manner. In interviews later in the day, Daniels’ attorney implied that these threats have come since Donald Trump became President. Last night’s filings likely mean that there will be much more to come in this case and that any Administration hopes that this storm would disappate will not come to pass.

Here is a copy of the Notice of Removal filed by Essential Consultants, L.L.C.:

And the Notice of Joinder filed by the attorney representing President Trump:

‘Like’ A Brand Online And Lose The Right To Sue