The Cleveland Police Department has agreed to submit to significant monitoring in the wake of a damning Justice Department investigation. 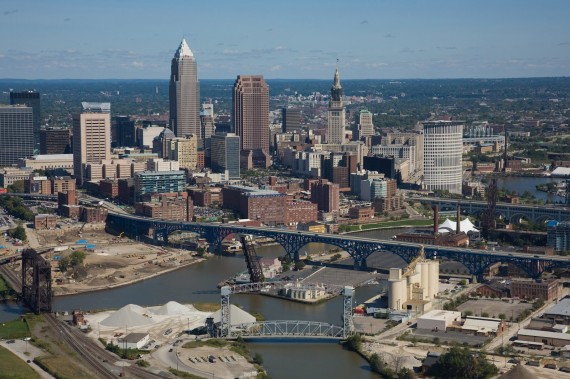 Yesterday, the Justice Department and the Cleveland Police Department reached a wide-ranging agreement related to the report issued last year that found widespread misconduct and discrimination by Cleveland police:

CLEVELAND — The Cleveland police department, which has become synonymous with the racially charged debate over police tactics, has agreed to follow some of the most exacting standards in the nation over how and when its officers can use force, and it will accept close oversight to make sure those rules are not ignored, city and federal officials said Tuesday.

The agreement is part of a settlement with the Justice Department over what federal officials have called a pattern of unconstitutional policing and abuse in Cleveland. The department found in a review released late last year that police officers here used stun guns inappropriately, punched and kicked unarmed people, and shot at people who posed no threat. The episodes often went unreported and uninvestigated, investigators found.

“There is much work to be done, across the nation and in Cleveland, to rebuild trust between law enforcement and the communities they serve where it has eroded, but it can be done,” said Vanita Gupta, who leads the Justice Department’s Civil Rights Division. “Today’s agreement really should serve as a model for those seeking to address similar issues in their communities.”

At a time when the Obama administration has bemoaned the lack of data surrounding the use of force by the police, even when people are killed, Cleveland has agreed to document every time officers so much as unholster their guns. Police supervisors will investigate the uses of force in much the same way that officers investigate crimes.

“A fundamental goal of the revised use of force policy will be to account for, review and investigate every reportable use of force,” the agreement says.

The new rules in Cleveland prohibit officers from using force against people for talking back or as punishment for running away. Pistol whipping is prohibited, and so is firing warning shots, the agreement says. The city has agreed to allow an independent monitor to track its progress. If the city does not put into effect the changes specified in the settlement, a federal judge has the authority to demand them.

Cleveland also agreed to hire a civilian to lead its internal affairs unit and to appoint an inspector general to investigate police misconduct and analyze policies and trends. The federal authorities believe that those changes, along with an internal panel assigned to review use-of-force cases, will ensure that police keep accurate records and conduct genuine investigations. The city will also form a civilian advisory panel to review policies and advocate better community relations.

Mayor Frank G. Jackson said the settlement allowed the city to make changes quickly and broadly. The document “gives us the structure and the tools we need to have comprehensive reform rather than doing one thing at a time,” Mr. Jackson said. He said the city had already begun outfitting officers with body cameras and trying to work more closely with community groups.

The report calls for the department to establish a coordinator for data collection not only on use of force but also for searches and seizures, and allows the independent monitor and the Justice Department to review and approve the “stop and search” data collection system.

The announcement of this agreement comes just days after the acquittal Saturday of Cleveland Police Officer Michael Brelo  in a bench trial arising out of a 2012 high-speed car chase that ended in the death of two African-Americans. Outside of a few arrests over the weekend, that verdict did not result in the widespread protests across the city that many were anticipating, although that may have been due in no small part that it was a holiday weekend. The announcement also occurs in the context of the continuing investigation of the November 22nd shooting of 12 year-old Tamir Rice by a Cleveland Police Officer while he was playing in a local park with a toy gun. And, of course, it comes in the context of a long history of abuse by the Cleveland Police Department documented in the report that the Justice Department released last year. Given the conclusions of that report, it was evidence that the Federal Government would have sought court relief against the department as they have in other situations. Instead, the department wisely chose to cooperate in the mater rather than fighting it.

What we’re seeing here in Cleveland is likely to serve as a model going forward in other jurisdictions. The Justice Department has already issued a report, for example, detailing abuses and racial prejudice in the Ferguson, Missouri Police Department, and they have opened an investigation into the practices of the Baltimore Police Department in the wake of the shooting of Freddie Gray last month. While the reforms in Ferguson are likely to focus as much on political reforms and changes in the way police enforce certain petty offenses, the Cleveland experience is likely to become a guide for what eventually happens in Baltimore and in other cities around the country. If these reforms work, then that could go a long way toward easing tensions in many American cities and putting policing back on the right track.