Lisa Murkowski, who lost the Republican primary, may be on the verge of winning re-election as a sore-loser write-in. 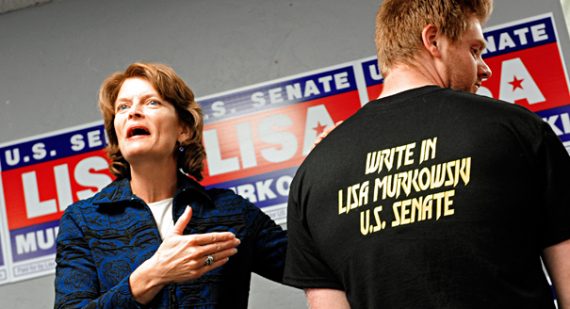 Lisa Murkowski, who lost the Republican primary, may be on the verge of winning re-election as a sore-loser write-in.

Most recent polls show Murkowski trailing behind Miller by only 1 to 2 percentage points, within the margin of error.

Democratic candidate Scott McAdams is at a distant third, although his recent advertising campaign touting his Alaskan roots has boosted him in the polls since August, when even Democratic National Committee spokesman Brad Woodhouse couldn’t recall his name.

Both Miller and Murkowski have stepped up their assaults, releasing powerful ads touting their own achievements while attacking each other.

“The horses are coming around the final bend right now and they’re not in the absolute final sprint, but one of them’s got to get a kick coming out of the bend and look strong in the next week, and whoever can create that momentum will be the one that draws some of that indecisive support onto them,” said Alaska pollster Ivan Moore.

The wheels are definitely coming off the Miller campaign:  The feud with Todd Palin over his Miller’s unwillingness to declare Sarah Palin qualified to be president, refusal to answer questions about legitimate questions about corrupt practices as a public official, a bizarre arrest of a journalist at one of his events, and some unusual policy positions — including advocating an East German approach to the border — have taken their toll.

But, while all the recent polls have Miller up by only one or two points, the fact remains that Murkowski’s name doesn’t appear on the ballot.   While writing down something close enough to her name to make it obvious that she’s their choice shouldn’t be all that hard for her supporters, most analysts see that additional barrier as substantial.   But, really, there’s little precedent for a write-in campaign for someone so established.

She’s probably helped, too, by the fact that she has declared matter of factly that she’ll remain a Republican if she is in fact re-elected and that there’s no “wasted vote” angle here:   There’s zero chance that McAdams wins barring some massive scandal or fraud.