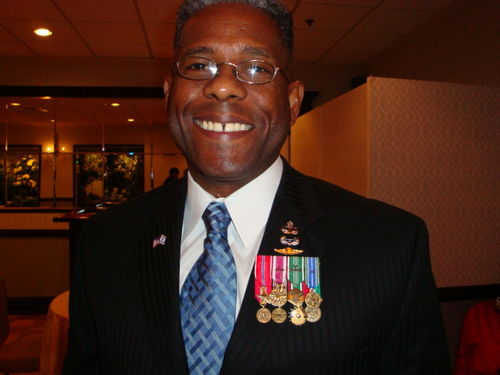 OTB first covered West in October 2003, when he became famous as an Army lieutenant colonel for being charged with criminal assault for firing his weapon at the head of an Iraqi detainee as a means of enhanced interrogation. Or, as we used to call it, “torture.” Or, as they call it in Geneva, a “war crime.” I observed at the time,

While the results were obviously terrific in this instance, the Army can’t condone this conduct lest it become the norm. While West’s actions would not cause any negative reaction in most armies, a professional force can’t behave in this manner.

Amusingly, John Cole was ambivalent on the matter, perhaps the last time he’s been ambivalent about anything. Five years later, when the Veterans of Foreign Wars endorsed West’s non-veteran opponent, I had forgotten that back story before being reminded of it by a commenter. Even without that information, though, I noted,

[S]imply serving in the military doesn’t  mean you’d be a good Congressman and automatically deserve the support of veterans, even if your opponent never wore a uniform.   If the VFW supported Charlie Rangel’s opponent, for example, I’d be thrilled.  And Rangel is a bonafide hero of the Korean War.

Little did I know how prescient I was. Rangel was a veritable Henry Clay compared to West, who embarrassed himself more times in a two-year Congressional career than Rangel managed over the course of decades. And lord knows the man tried.

Also, he wears his military medals, including his skill badges, pretty much everywhere he goes.

Sadly, we’ve almost surely not seen the last of this clown.