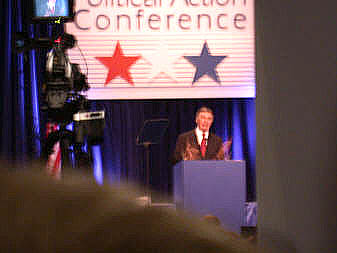 Donaldson and Novak have both been congenial but neither has said anything particularly noteworthy.

It’s rather overcrowded, though, and the sound projection is remarkably poor. It doesn’t help that some yahoo is blaring country and western music rather loudly.

It’s going to take a while to figure out how to actually manage this. Live blogging doesn’t seem feasible given the poor accomodations, so I’ll likely just record impressions as I can.

So far, the highlight has been meeting the other bloggers here, including Mike Krempasky, Kevin Alyward, Sean Hackbarth, and LaShawn Barber.