Kerry: No Time for Security Briefing 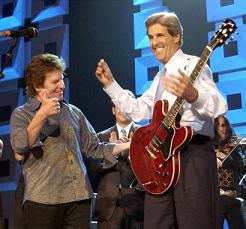 Just hours before attending an all-star celebrity fundraising concert in New York, Dem presidential candidate John Kerry revealed how has been too busy for a real-time national security briefing.

“I just haven’t had time,” Kerry explained in an interview.

KING: News of the day, Tom Ridge warned today about al Qaeda plans of a large-scale attack on the United States. Didn’t increase the — you see any politics in this? What’s your reaction?

KERRY: Well, I haven’t been briefed yet, Larry. They have offered to brief me. I just haven’t had time.

Does this really matter? No, not really. Presumably, someone can fill him in later. And it’s not like he actually votes on anything these days, anyway. Still, it’s rather amusing. And one suspects this will make it into the Bush campaign ads. . .

Update (12:43): Oliver Willis provides a longer version of the King transcript that includes this sequence a few lines after the above:

KING: When do you — when do you get your briefing?

KERRY: We’re arranging it. It’s at the end of the week I’ll get it.

KING: Should be pretty soon.

KERRY: I think it’s tomorrow or the next day.

I agree with his assessment that it sounds as if this is a “special” briefing he’s getting as someone who could conceivably be president in a few months, not a scheduled Senate briefing. That makes it even more of a non-issue than it was in the short version.