Former Senate Majority Leader Trent Lott has written a tell-all book criticizing several of his Republican colleagues in the Senate.

Former Senate Majority Leader Trent Lott blames his fall from power in 2002 on a “personal betrayal” by an ambitious Sen. Bill Frist, his successor, adding in a new book that President Bush, Colin Powell and other GOP associates played a role. Frist, R-Tenn., “didn’t even have the courtesy to call and tell me personally that he was going to run,” the Mississippi Republican wrote of a tumultuous period in which he lost his position as Senate leader after making racially tinged remarks. “If Frist had not announced exactly when he did, as the fire was about to burn out, I would still be majority leader of the Senate today,” Lott said in “Herding Cats, A Life in Politics.”

A spokeswoman for Frist, Amy Call, said the senator “hasn’t read the book, so he can’t comment directly, but he always appreciates Senator Lott’s advice.”

Republicans lost their thin majority in 2001 when Sen. Jim Jeffords of Vermont left the GOP to become an independent. “I had raised money for Jeffords; in 2000, I had even campaigned for him in Vermont. Six months later, this was the way he repaid me,” Lott wrote. “He’d always had a habit of bartering his crucial vote on legislation for his own pet projects,” Lott said.

Lott’s final fall from power was triggered when he said at Sen. Strom Thurmond’s 100th birthday that the country “wouldn’t have had all these problems over the years” if it had elected Thurmond president in 1948.

The remarks directed to the one-time segregationist were delivered off the cuff, Lott wrote, saying he often kidded Thurmond, R-S.C., by telling him he would have made a great president.

The uproar was slow to build. But, Lott wrote, by the time it was over, former Sen. Don Nickles of Oklahoma had helped bring him down, and he recalled a tense conversation with Sen. George Allen of Virginia, who told him to resign for the good of the party. “`I’m not going to do it,’ I yelled back at him. `I’m not going to do it and I’m very disappointed by your call,” Lott wrote.

Bush “struck at me,” Lott wrote, when he said that Lott `has apologized and rightly so.” Lott added, “I couldn’t argue with the words he chose. But the tone he employed was devastating … booming and nasty.”

Powell, who was secretary of state at the time, called in reporters to deplore Thurmond’s Dixiecrat campaign of 1948. “I couldn’t understand it. I’d worked with him enough over the years that he should have known I wasn’t a racist,” Lott wrote.

Lott is incredibly bitter and perhaps understandably so. While his words were poorly chosen–and were part of a schtick he used repeatedly vis-a-vis Thurmond–that they would lead to his downfall was not something he could have unexpected. Politics is exceedingly personal and people he thought he could count on failed to back him in his moment of crisis and he obviously remains deeply hurt.

What’s bizarre, though, is that he has continued on in the Senate and obviously hopes to regain a berth in the leadership. Clearly, this book damages that aim. 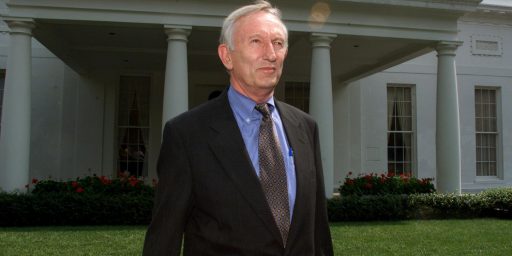