With ten weeks to go ,there's been some tightening in the polls but Hillary Clinton continues to maintain a commanding lead in the race for the White House.

The past week of Presidential campaigning has been dominated most notably by some very obvious confusion on the part of the Trump campaign regarding what their candidate’s position on immigration reform should be going forward into the fall. Given the fact that immigration has been the central issue of the Trump campaign since he entered the race in June 2015, this is obviously somewhat confusing to those of us paying attention since one would assume that it would be the one area where the candidate and the campaign were on the same page and the policy positions had been made clear long ago. For Trump, those policy positions were the construction of a border wall that Mexico would pay for, unspecified restrictions on legal immigration such as limiting the number of H1-B and similar “work” visas that allow people from foreign countries to work in the United States provided there’s a demonstrably need for them and proof that employees have been unable to fulfill those needs from among the domestic work force, and the deportation of the estimated 11 million people in the nation illegally, possibly by use of a so-called “deportation force” if necessary. Last week, though, the Trump campaign flip-flopped back and forth between an apparent softening of that last position that would not require illegal aliens to leave the country to a restatement of the candidate’s previous position that no illegal immigrant could obtain legal status without first leaving the country. As things stand now, the candidate is set to deliver a major immigration policy speech in Arizona tomorrow, so we’ll either get a restatement of past positions or something entirely different. On the Clinton side of the ledger, the candidate continues to deal with issues surrounding donations to the Clinton Foundation and her use of a private email server, but otherwise had a somewhat quiet week that included a long fundraising stint on the West Coast that reportedly raked in a large amount of money. Additionally, toward the end of the week Clinton unloaded on Trump and his ties to the extremist and racist political movement that describes itself as the “alt-right” in a speech that could have an impact down the road if her campaign keeps up the attacks. It was, in other words, a relatively quiet week for both campaigns made notable by the fact that Donald Trump failed to actually stick his foot in his mouth, which I suppose is somewhat of an accomplishment.

On the polling side, there hasn’t been that much of a change over the past seven days at either the national or the state level, at least not anything that would suggest a major change in the status of the race.

Looking first at the national polls, we see that Hillary Clinton continues to lead Donald Trump quite comfortably, although there has been some tightening since last week. In a two way race, RealClearPolitics shows Clinton with at 46.7% to Trump’s 41.7%, giving her a five point lead in the poll average. That constitutes a drop of one-half a point since last week and reflects the fact that we’ve seen Clinton’s lead in the national polling that has been released over the past week narrow somewhat, although not in what could fairly be called to a statistically significant degree. The change is even smaller in the four-way race that features both Libertarian Party nominee Gary Johnson and Green Party nominee Jill Stein. In that race, Clinton is averaging 42, 2% to Donald Trump’s 38.0%, which is slightly higher than they stood last week, while Johnson has slipped down to an 7.8% average and Stein to an average of 3.2%. This gives Clinton an average lead in a four-way race of 4.3 points. The situation is roughly the same in the Pollster two-way and three-way polls. In other words, there’s been very little significant movement in the national polls, as this chart of the two-way race shows us: 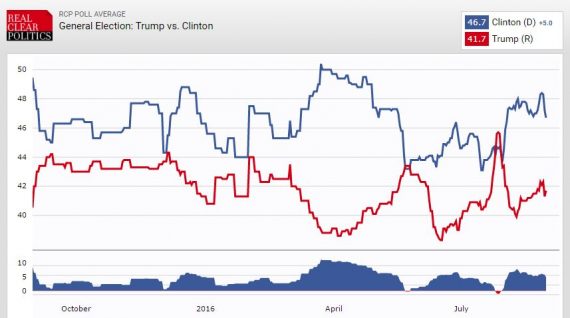 The stability of the race is even more apparent in the four-way race: 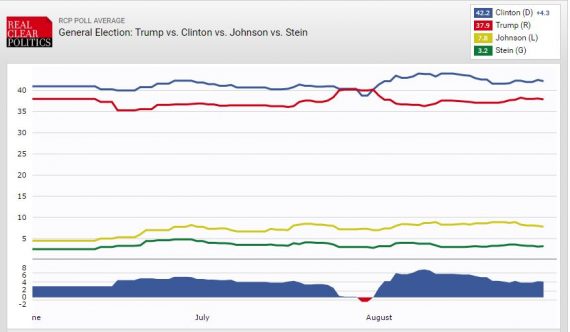 There has also been somewhat of a tightening at the state level, with polls in several battleground states showing a somewhat closer race than they did at the beginning of the month. The big difference between 2016 and 2012, though, is what states are considered battlegrounds. At the moment, states that were battlegrounds in 2012 and 2008, such as Virginia, appear to be out of reach for the Trump campaign, while traditionally red states such as North Carolina, Georgia, Missouri, and Arizona seem as though they might be vulnerable to a Democratic pick-up in November, something that would essentially be a disaster for Republican hopes to take back the White House. Meanwhile, the polls continue to show that the Trump campaign’s to forge an alternate path for victory through the industrial Midwest continues to largely be a dream, with Wisconsin, Michigan, and Pennsylvania all firmly in the Democratic camp, and Hillary Clinton leading by 3.8 points in the two-way race, and 3.2 points in the four-way race in Ohio. Clinton also has a 2.7 point lead in Florida in the head-to-head race, and a 3.6 point lead in a four-way race. These numbers come on the eve of Trump’s first major ad buy of the campaign season, which will focus on many of these states, so we’ll get a chance over the next couple weeks to see if he’s able to move the needle in any significant respect. As things stand now, though, there’s very little change in the races as the state level as measured by the RealClearPolitics Electoral Map, which shows Clinton leading in enough states to give her 272 Electoral Votes, Donald Trump leading in enough states to give him 154 Electoral Votes, and some 112 Electoral Votes classified as Toss-ups due to the margin between the candidates in eight states being too close to give to one candidate or the other. Without tossups, Clinton leads with 362 Electoral Votes to Donald Trump’s 176 Electoral Votes, which would make the outcome of the 2016 race most resembling the outcome of the 2008 race between Barack Obama and John McCain. These are the same numbers we saw in the maps I posted last week, which shouldn’t be a surprise since there were no major changes at the state level and state level polling tends to move slower than national polling in any case.

Expanding the review to look at other projections, Nate Silver’s FiveThirtyEight projection models show Clinton as the favorite in each of the models that site uses. The polls-only forecast projects a 78.5% likelihood of a Clinton victory and a 21. 4% chance of a Republican victory, for example, while the ‘Polls-Plus’ forecast gives Clinton a 73.6% chance of winning versus 26.4% for Donald Trump and the “Now-cast,” which purports to project would happen if the election were held today, showing a 77. 2% chance of a Clinton victory and a 22.8% chance of a Trump victory. Sam Wang’s projection, meanwhile, foresees Clinton  ending Election Nigh with 341 Electoral Votes, leaving Trump with 197 Electoral Votes. The University of Virginia’s Larry Sabato, meanwhile, projects Clinton with 348 Electoral Votes to 190 for Donald Trump.

In other words, with ten weeks out this remains Hillary Clinton’s race to win or lose. While there has been some tightening in the national and state polls, this is to be expected and, so far at least, the tightening has not been severe enough to really through the outcome of the race in doubt. Donald Trump’s potential change of position on immigration and his campaign’s impending ad buys are likely to be the biggest influences on the race in the short term, but absent some outside force acting on both candidates it’s hard to see many major changes happening in the near-term, which works to Clinton’s advantage especially as we get closer to the beginning of early voting in crucial states such as Ohio and Florida. In fact, it’s likely that we won’t see much change in the race at all until the first Presidential debate at the beginning of September, which is setting up to be one of the defining moments of the campaign going forward.

With Eleven Weeks To Go, Hillary Clinton Appears To Be Unstoppable

Note: The national poll numbers noted above, and associated charts, were updated to include the impact of a Public Policy Polling national poll released contemporaneously with the publication of the post. In that poll Clinton leads Trump by five points in a head-to-head match, and also five points in a four way match.