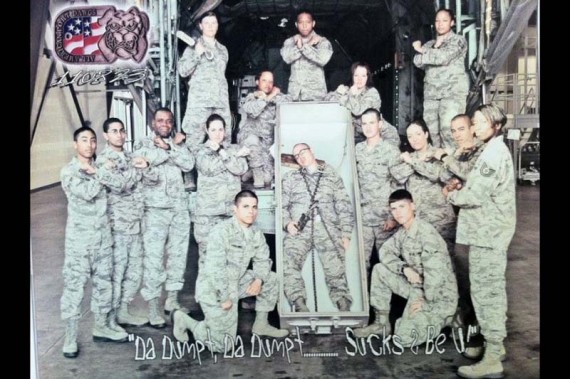 The commander of the 37th Training Group at Lackland Air Force Base, Texas, has launched an investigation into a photo of 15 airmen posing with an open casket, in which another airman is posed with a noose around his neck and chains across his body.

“Da Dumpt, Da Dumpt …. Sucks 2 Be U” is written under the photo, which was emailed to Air Force Times.

In the picture, tech sergeants and staff sergeants stand with junior airmen surrounding the metallic casket, similar to those used to carry war dead home to the U.S.

The purpose of the photo, its inscription and its intended audience are not known. It surfaced one month after the public disclosure that the Air Force’s Port Mortuary at Dover Air Force Base, Del., had lost and mishandled the remains of hundreds of fallen troops.

“We take this matter seriously. [Air Education and Training Command] has initiated a commander directed investigation,” Donley said in a statement to Air Force Times. “Such behavior is not consistent with our core values, and it is not representative of the Airmen I know. It saddens me that this may cause additional grief to the families of our fallen warriors.”

The photo is dated Aug. 23 — more than two months before the Dover story broke — and appears with a logo reading “All American Port Dawgs” in the upper left corner. “Port Dog” is a nickname for aerial porters, who train at Lackland; it comes from an aerial port unit coin circulated in the early 1990s.

Whatever its intended purpose was, it proved offensive to at least one soldier with the 82nd Airborne Division.

“I cannot help but picture the faces of my dead [soldiers] that we drug out of burning vehicles, dug out from collapsed buildings,” Staff Sgt. Elias Bonilla wrote in an email to Air Force Times.

Bonilla said the photo, together with the Dover revelations, made him worry that he could not trust the Air Force with transporting the remains of his men, especially because the photo included noncommissioned officers.

“I cannot understand the behaviors of the United States Air Force,” he wrote. “I refuse to accept that military personnel could be so far removed from their own identity as a military unit to permit such disgraceful conduct.”

It should be noted that the airmen in question were in training for transport duty and not actually handling the remains of American soldiers and marines. Still, they clearly don’t see themselves as part of America’s warrior class or feel a connection to those who put their lives in peril in military service.

It’s possible that the airmen in question can be trained; they’re young and not yet fully integrated into the profession of arms. The NCOs in the photo should be court martialed and dishonorably discharged from the service under Article 134 of the UCMJ for conduct “to the prejudice of good order and discipline in the armed forces” and “conduct of a nature to bring discredit upon the armed forces.”