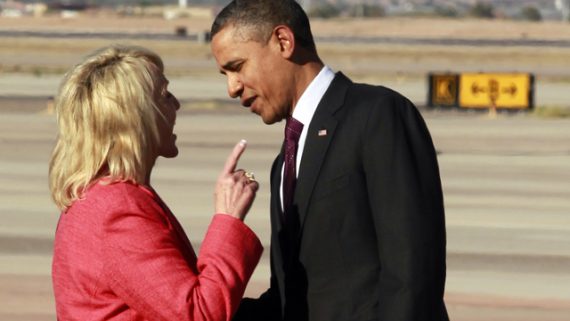 Arizona Gov. Jan Brewer points at President Barack Obama after he arrived at Phoenix-Mesa Gateway Airport, Wednesday, Jan. 25, 2012, in Mesa, Ariz. Brewer greeted Obama and what she got was a book critique. Of her book. The two leaders engaged in an intense conversation at the base of Air Force Oneâ€™s steps. Both could be seen smiling, but speaking at the same time. Asked moments later what the conversation was about, Brewer, a Republican, said: “He was a little disturbed about my book.” Brewer recently published a book, “Scorpions for Breakfast,” something of a memoir that describes her years growing up and defends her signing of Arizonaâ€™s controversial law cracking down on illegal immigrants, which Obama opposes. Brewer also handed Obama an envelope with a handwritten invitation for Obama to return to Arizona to meet her for lunch and to join her for a visit to the border. (AP Photo/Haraz N. Ghanbari)