CAN DEMOCRACY AND FANATICISM COINCIDE?

Charles of LGF argues ritual self-flaggelation is proof that Iraqis can’t be democratized. I must admit, there’s a lot of work to be done in establishing a rational civic culture. 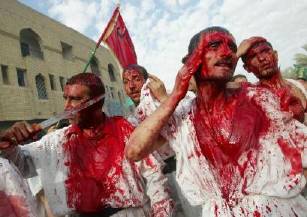 Iraqi Shiite pilgrims slash open their heads with swords as they march and chant in front of Imam Hussein Shrine in Karbala, Iraq Tuesday April 22, 2003. For the first time in decades, Shiite Muslims in Iraq are able to perform this ritual done to mark the killing of one of their most important saints, Imam Hussein. During the rule of Iraqi President Saddam Hussein, such rituals were banned.
(AP Photo/David Guttenfelder)
FILED UNDER: Iraq War, Middle East, Religion