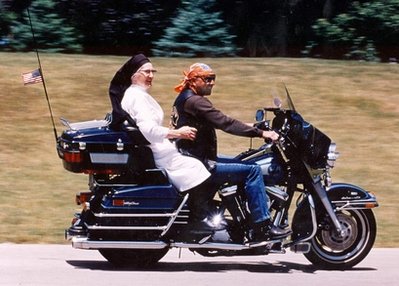 FILE PHOTO Sister Amallia of St. Monica’s Senior Citizen’s Home, rides with Don Kuzik on his Harley-Davidson motorcycle Sunday afternoon June 21, 1992 in Racine, Wis. The Kenosha Harley Owners’ Group, Inc., had made their third annual visit to take residents of the home for cycle rides. For the less adventerous, sidecars were also availalble. The much-loved racket of the bikes could be rumbling away to another state if the company cannot bring down its labor costs. Harley-Davidson warned employees in April that it will move its Wisconsin manufacturing operations elsewhere if it cannot cut millions of dollars at the factories that build the bikes known as “Milwaukee Iron.” (AP Photo/Journal Times, Mark Hertzberg)