The Everything’s Bigger in Texas Edition OTB Caption ContestTM is now over. 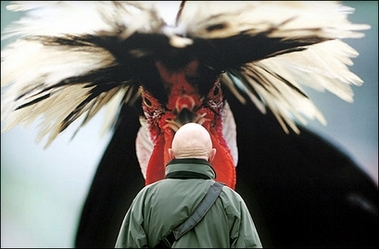 Third(tie): Scott_T – Hello Butterball Help Line? So how many hours per pound do I cook a 1000-lb turkey?

Anderson– Kim Jong Il’s emissary knew, suddenly, two things: that the reports from the nuclear test site were true, and that he would never survive to report them to Dear Leader.

stillearly – Oh no, it’s Cynthia McKinney fully enraged and about to strike!

Timmer – Next on The Travel Channel: The truth behind why Zen Buddhists don’t eat meat.

Lord, when I said I wanted a bigger pecker this isn’t exactly what I had in mind.

In the end PETA decided it didn’t really find the ad offensive at all.