The Kerry, Flat as a Pancake Edition OTB Caption ContestTM has concluded. 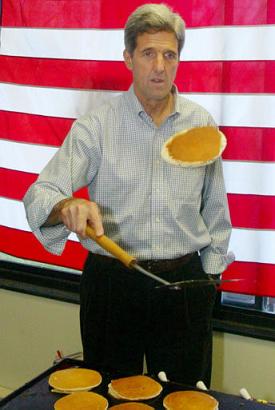 1st: Jim, “My chance of being elected president exactly equals the chance that this pancake will not come back down.”

2nd: Alex Knapp, “Senator John Kerry (D – MA), prepares pancakes for a crowd in Iowa. Senator Kerry claims to have learned his pancake making technique when he fought in Vietnam.”

3rd: Steven, “I have re-launched my campaign to become the President of IHOP. I pledge to allow the UN more say over the menu.”

Honorable mention to Rodney Dill’s, “The Top Ten Reasons that The John Kerry wishes that Michael Jackson were with him at the pancake flipping photo opportunity.”

Thanks to all the participants.