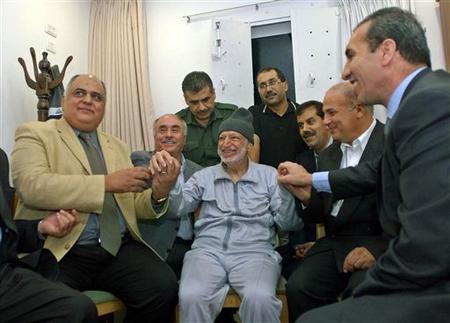 1st – Michael Angier: Thank Allah they did not make me wear one of the American ORANGE JUMPSUITS.

2nd – Eric: When Arafat asked them to do the Hora, his advisers began to suspect the end was near.

3rd -duke: Yasser Arafat came out today and announced that he has entered into a polygamous gay civil marriage with the Hasan brothers of Gaza. Yazz, as his spouses refer to him, said Ã¢€œWeÃ¢€™re going to sue to get our love legimized by the state. If Mohammad had at least 11 wives, why canÃ¢€™t I have a harem, too?Ã¢€

Thanks to all the participants. A new contest will begin later in the week.