The Secretary of State is ignoring a hold by the House Foreign Affairs Committee Chairwoman. 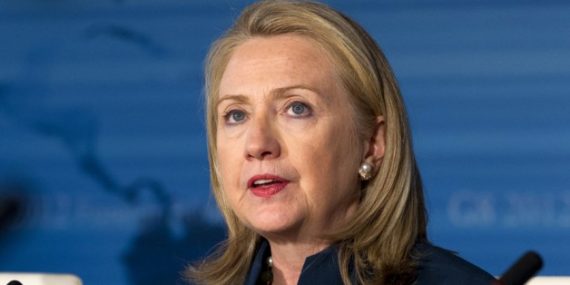 Secretary of State Hillary Rodham Clinton is allowing U.S. funds to flow to the West Bank and Gaza despite a hold by House Foreign Affairs Committee Chairwoman Ileana Ros-Lehtinen, R-Fla., a rare display of executive-branch authority that angered the key lawmaker concerned about protecting her congressional oversight role.

A State Department official said that a letter was delivered on Tuesday to key members of Congress informing them of Clinton’s decision to move forward with the $147 million package of the fiscal year 2011 economic support funds for the Palestinian people, despite Ros-Lehtinen’s hold. Administrations generally do not disburse funding over the objections of lawmakers on relevant committees.

The funds deliver “critical support to the Palestinian people and those leaders seeking to combat extremism within their society and build a more stable future. Without funding, our programs risk cancellation,” the official, who was not authorized to speak about the issue, said in an e-mail. “Such an occurrence would undermine the progress that has been made in recent years in building Palestinian institutions and improving stability, security, and economic prospects, which benefits Israelis and Palestinians alike.”

Late last month, Ros-Lehtinen sent a letter to Clinton and U.S. Agency for International Development Administrator Rajiv Shah, informing them she will lift her hold on some $88.6 million of the Palestinian aid package — out of the full $147 million — under special conditions. Appropriations State and Foreign Operations Subcommittee Chairwoman Kay Granger, R-Texas, agreed to release her hold on the full assistance package on humanitarian grounds.

I both disagree with Ros-Lehtinen on the substance of her policy objection and am leery of Congressional micromanagement of US foreign policy in this manner. Still, the Executive doesn’t have the authority to overrule Congress on spending issues and the State Department’s powers exist mostly under delegation from Congress. This is a dangerous precedent, indeed, and I would expect Congress to act to reclaim its power here.

UPDATE: In a back-and-forth in the comments section, @Tano posits a perfectly reasonable question: “What is the alternative? Having the executive branch spend the money that Congress has appropriated without having a single member interfere? What is wrong with that?”

Let me respond here rather than in the comments section, as my initial posting was rather vague, and bump this post from a Quick Take to a longer post.

Under the current system, Congress gives the Executive money in big baskets with boatloads of discretionary authority–with the proviso that they can micromanage tiny bits of it if a powerful Member feels strongly about it. That’s not ideal, as I’ve already stipulated.

Removing the minor absurdities, though, may yield a worse system in which Congress attempts to micromanage larger parts of US foreign policy via the budget process. That’s assuming, of course, that Congress could actually manage to pass a budget under such a scenario.

The niceties of our system are rather silly but they lubricate what would otherwise be an even more fractious system and allow it to operate.