If this is true, then there is nothing to regulate. The horses have already run off, closing the barn door now is not going to help.

Greed and fear, which routinely govern financial markets, have seeded this global crisis. Just when it will end isn’t clear. What is clear is that its origins lie in the ways that Wall Street — the giant investment houses, brokerage firms, hedge funds and “private equity” firms — has changed since 1980. Its present business model has three basic components.

Given that this is an election year everyone is busy pointing fingers. Its the Democrats fault, its the Republicans fault. Clinton! Bush! Reagan! The reality is that there is plenty of blame to go around for just about everyone to have a nice big serving.

In 1999 the Glass-Steagall Act was repealed. Here is the Wikipedia entry,

The Glass-Steagall Act of 1933 established the Federal Deposit Insurance Corporation (FDIC) in the United States and included banking reforms, some of which were designed to control speculation.[citation needed] Some provisions such as Regulation Q that allowed the Federal Reserve to regulate interest rates in savings accounts were repealed by the Depository Institutions Deregulation and Monetary Control Act of 1980. Provisions that prohibit a bank holding company from owning other financial companies were repealed on November 12, 1999 by the Gramm-Leach-Bliley Act signed by William J. Clinton.[1][2]

Add on top of that there are the skewed incentives Wall Street’s compensation packages present. If bonuses are linked to the amount of money made in a given year, then this creates a large incentive to focus on the short term at the expense of the longer term. Now think of a situation where we have a bubble. A trader might think, “Hey, sure its a bubble, but if makes it to sometime next January I can make a killing this year.” Then the bubble pops in October and uh-oh lots of money suddenly disappears.

Then there is leverage–i.e. borrowing money to invest in securities. Really more of a sophisticated form of betting.

Finally, investment banks rely heavily on borrowed money, called “leverage” in financial lingo. Lehman was typical. In late 2007, it held almost $700 billion in stocks, bonds and other securities. Meanwhile, its shareholders’ investment (equity) was about $23 billion. All the rest was supported by borrowings. The “leverage ratio” was 30 to 1.

It wasn’t that Wall Street’s leaders deceived customers or lenders into taking risks that were known to be hazardous. Instead, they concluded that risks were low or nonexistent. They fooled themselves, because the short-term rewards blinded them to the long-term dangers. Inevitably, these surfaced. Mortgages went bad. The powerful logic of high leverage went into reverse. Losses eroded firms’ tiny capital bases, raising doubts about their survival. This year, Lehman lost nearly $8 billion in “principal transactions.” Otherwise, it was profitable.

Reminds me somewhat of the internet/tech bubble in the 1990’s. People had this wacky notion of the “New Economy”. They had all sorts of goofy ideas such as it higher growth rates were now possible. Negative growth wasn’t really possible. It wasn’t the number of people at work that mattered, but the number of processors. Of course, that all came to an end.

How Wall Street restructures itself is as yet unclear. Companies need more capital. Merrill went to Bank of America because commercial banks have lower leverage (about 10 to 1). It seems likely that many thinly capitalized hedge funds will be forced to reduce leverage. Ditto for “private equity” firms. In time, all this may prove beneficial. Financial firms may take fewer stupid and wasteful risks — at least for a while. Talented and ambitious people may move from finance, where they were attracted by exorbitant pay, into more productive industries.

And there in lies the danger of bailing these firms out. The people who made these mistakes are then insulated from their mistakes. There is no or reduced downside. Being stupid is not longer horrible, just unpleasant and maybe a tad embarassing.

Of course, the effects are yet to be fully felt.

But the immediate effect may be to damage the rest of the economy. People have already lost their jobs. States and localities, particularly New York City and New Jersey, that depend on Wall Street’s profits and payrolls will face further spending cuts. Banks and investment banks may tighten lending standards again and impede any economic recovery. The stock market’s swoon may deepen consumers’ pessimism, fear and reluctance to spend. There may be more failures of financial firms. It’s hard to know, because financial crises resemble wars in one crucial respect: They result from miscalculation.

Indeed. This could push the economy into recession. Oh and look, just in time for the next President. If Obama wins the recession will be his, just as the last recession was Bush’s. Same for McCain. And more regulations wont solve the problem. In fact, badly designed regulations could make things worse. If regulations tighten lending standards too much, then that could impede an economic recovery. 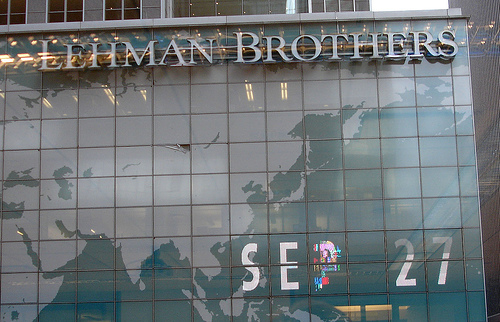