Phil Carter explains why nobody really knows how many soldiers we need in the military.

During the Cold War, U.S. planners could look at Warsaw Pact strength, do some fuzzy math to adjust for technology and skill differentials, and predict how many troops the United States needed to block a Soviet march through West Germany’s Fulda Gap. *** But now the military has to prepare for myriad threats, from aggressive states like Saddam’s Iraq to failed states like Somalia to non-state terrorist groups like al-Qaida. In the early 1990s, the Pentagon developed the “2 Major Regional Conflict” doctrine, which held that the United States should be capable of fighting two major regional wars at once. Elaborate war games were conducted to figure out how many forces would be necessary to meet this paradigm, and the results drove subsequent requests for personnel, equipment, and force structure. The 2MRC model quickly proved insufficient for real life. In the ’90s, smaller deployments to Somalia, Haiti, Bosnia, and Kosovo stripped the Army’s capability to fight two wars at once. These deployments also highlighted the disconnect between the wars the Army planned to fight and those missions it was actually given.

He’s got quite a bit more analysis at Intel Dump as well.

In a related piece, Fred Kaplan explains why a draft won’t solve anything. The short answer: we don’t need more stupid soldiers. 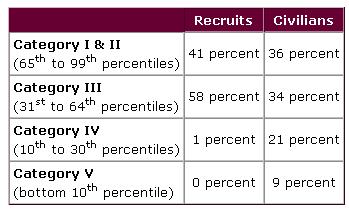 On balance, by this measure, those who volunteer for the military are smarter than those who don’t.

Other indicators confirm this impression. The average recruit has an 11th-grade reading level; the average civilian can read at a 10th-grade level. Nearly all recruitsÃ¢€”97 percent of female, 94 percent of maleÃ¢€”graduated from high school; 79 percent of civilians have high-school diplomas. Officers are better-educated still: All are now required to have college degrees.

In short, today’s armed forces are not the downtrodden, ethnically lopsided social rejects that they tended to be after the Vietnam War, when the all-volunteer military came into being.

Bringing back the draft would lasso the social dregs along with the society elite. Would the net effect be a “more equitable representation of people making sacrifices,” as Rangel put it? Maybe, maybe not. Even with a draft, not everyone would serve. About 11 million Americans are 20 to 26 years old. The military doesn’t need 11 million people. A draft would have to involve some sort of lottery. If that’s the way it goes, there should be no exemptions (except for the physically disabled, the mentally incompetent, convicted felons, and perhaps conscientious objectors). Still, unless a military draft was one component of a compulsory national-service program (the subject of another essay), only some would be called. It’s a matter of chance whether the kids from the suburbs would be called more than the kids from the projects.

There’s quite a bit more; it’s worth reading.

The bottom line is that–as everyone who studies the matter has known for over a decade–we need to radically re-align the force. There have been some impressive changes made in the last three or four years, but the change has come too slowly. The force is considerably better than it was even a few years ago at fighting jointly–the Army, Navy, Air Force, and Marines working together as a cohesive team. But today’s force still looks far too much like a downsized version of its Cold War era predecessor. We’ve got far too much heavy maneuver capability on active duty, far too much of our precious peace and stability operations capability (MPs, civil affairs, psyops, engineers, etc.) in reserve, and too much of the former and not enough of the latter, period.

UPDATE: Looking again at Kaplan’s numbers, I’m slightly confused by the civilian distribution. Presumably, it’s based on a static baseline based on a past year. Otherwise, one would expect the percentiles to line up exactly.