Michael Demmons asks a question that has occured to me from time to time as well:

A tree crashes in my backyard and destroys my home. Unless I am covered by insurance, I am out of luck. A thousand trees crash into hundreds of homes. All of a sudden, it’s a disaster area, and the president walks in with billions in financial aid. Why is that?

It certainly throws the whole moral hazard equation out of whack. Why spend the money for insurance if you’re going to get bailed out by Uncle Sam? It would be one thing to provide relief for a freak flood in Arizona, since it is not something one would rationally plan for. But getting hit by a hurricane in Florida? That’s as rare as snow in North Dakota. (For which, oddly, we provide no relief funds.)

Of course, I’m still trying to figure out why–aside from politics–the taxpayers shelled out thousands of dollars apiece to the non-uniformed victims of 9/11. The families of the stockbrokers who were killed in the Twin Towers are no more aggrieved than any other people whose loved ones were murdered. 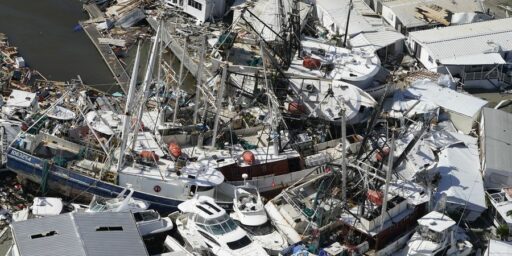