Well, first we had the Condolezza Rice picture fiasco with USA Today, and now the New York Times decides to post a questionable picture of Judge Alito.

I’m sure it was all an accident and there was no bias or malice involved. Sure. Right. By the way, I have a bridge I’m selling…

Update: The New York Times has removed the picture with no comment. Yep, professionalism in action.

Has anyone come up with peope who ware not conservatove, whose picture is similarly handled?

I don’t know, but if anybody does have any examples please post them in the comments (preferably with links to the pictures).

Update III: Several posters argue both pictures are bad in that one is too green and the other too red. Not sure I agree with one being too red, but here is a third version of the same picture that the Chicago Sun Times ran. 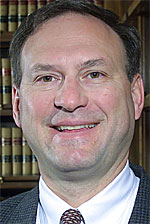 This one seems to be in between the “green” and “red” versions.