In the wake of a grievance filed by the union representing players, the N.F.L. has suspended the new National Anthem policy it announced earlier this year. This guarantees even more cynical political exploitation by the President. 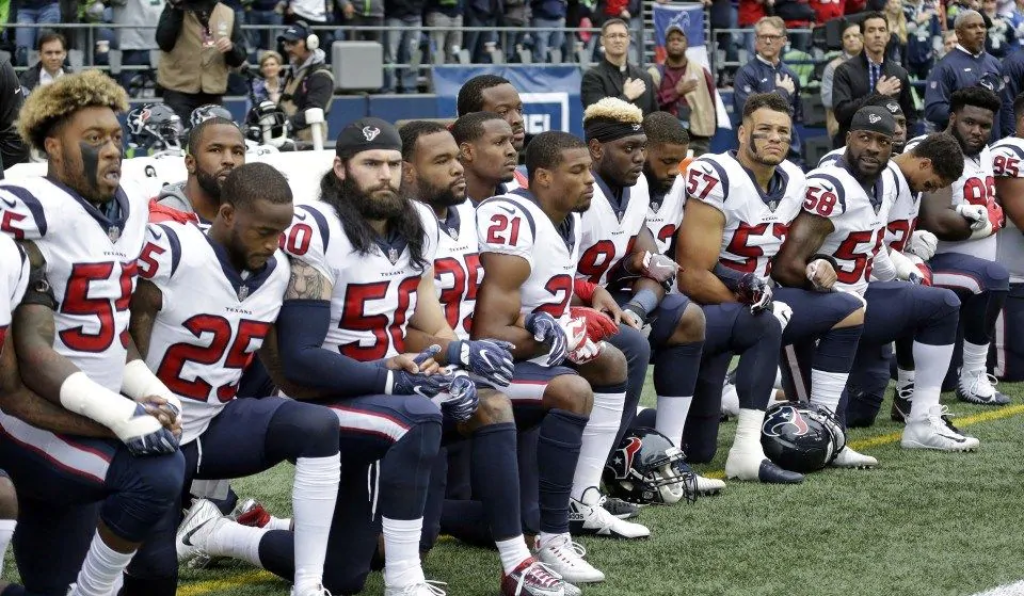 Responding to a grievance filed by the union representing players, the National Football League has announced that it was putting its new policy requiring players to stand for the National Anthem if they are on the field at the time it is performed on hold:

The NFL halted implementation of its new national anthem policy under an agreement with the NFL Players Association.

The sides announced the deal Thursday night. The agreement also keeps the grievance filed by the NFLPA over the anthem policy, ratified by the NFL owners at their May meeting in Atlanta, from moving forward, at least temporarily.

“Everything is on hold,” said one person familiar with the situation, confirming that both implementation of the anthem policy by the league and the union’s grievance are included in that.

The league and union said in a joint written statement: “The NFL and NFLPA, through recent discussions, have been working on a resolution to the anthem issue. In order to allow this constructive dialogue to continue, we have come to a standstill agreement on the NFLPA’s grievance and on the NFL’s anthem policy. No new rules relating to the anthem will be issued or enforced for the next several weeks while these confidential discussions are ongoing.”

The new anthem policy leaves it up to each team whether a player would be disciplined for a protest during the anthem. The policy says that a team will be fined by the league for any protest by its players. It gives players the option to remain in the locker room during the anthem but says any player who is on the field is expected to stand for the anthem.

For now, at least, that new policy is on hold. The NFL’s previous anthem policy, included in its game operations manual, required players to be on the sideline for the anthem. It suggested players stand for the anthem but did not require them to do so.

That previous policy presumably goes back into effect, pending a resolution by the league and the union in coming weeks. NFL teams have begun reporting to training camps, and the preseason begins Aug. 2. The regular season begins Sept. 6.

The NFL’s approach to the anthem and the player protests remained engulfed by controversy since the owners’ attempt in May to put the issues to rest.

Tennessee Titans defensive lineman Jurrell Casey told CNN at a promotional event in London this week that he was prepared to protest during the anthem and accept any fine imposed on him this coming season. Earlier Thursday, the Miami Dolphins left open the possibility that a player of theirs could be subject to a suspension of four games without pay for conduct detrimental to the team in the event of protesting during the anthem.

The Dolphins were not committing themselves to any particular penalty for a player who protests during the anthem, according to a person familiar with the team’s planning, who added: “We will address this issue once the season starts. All options are still open.”

According to that person, teams were required to submit their anthem-related rules to the league before their players reported to training camp.

This decision by the league to put the new policy on hold comes after the N.F.L. Players Association filed an official grievance against it last week and, as noted, on the same day that the Miami Dolphins announced a new policy that appeared to say that a player who kneeled during the anthem would be suspended for four games without pay, although it did not appear to require players to be on the field during the Anthem and the Dolphins back office was non-committal on the question of whether or not such suspensions would actually be enforced in the event a player or players chose to kneel during the Anthem. It also comes just weeks before the pre-season begins next month and about six weeks before the season begins in September, at which point it’s inevitable that the protest issue will be front and center as it has been for the past two seasons.

As with nearly everything else these days, this entire issue is tied up with politics and the impact that President Trump has had on cultural issues since entering the race for President more than three years ago. The kneeling protests themselves began, of course, during the 2016 season when Colin Kaepernick, who was at the time a Quarterback for the San Francisco 49ers began kneeling during the National Anthem. Initially at least, Kaepernick didn’t explain his actions but eventually he explained that he was kneeling as a form of protest against racism, police brutality, and the treatment of African-Americans by police, issues that had come to the forefront of American politics thanks to events such as the death of Michael Brown in the summer of 2015 and the death a year earlier of Eric Garner. For much of the 2016 season, Kaepernick was joined by a handful of others players, and at least initially the protests got some attention in no small degree because of their novelty. After a few weeks, though, the issue largely disappeared from the headlines and the season went on normally with very little controversy except perhaps some complaints from conservatives on social media.

When the 2017 season started a year ago, there were some sporadic case of players kneeling during the National Anthem, but as with the majority of the 2016 season it was not a very big news item and not really a controversy that was given much attention outside of the “Outrage Of The Day” conservative news media. That all changed when the President of the United States decided to get involved. It began during a campaign speech in Alabama in late September when Trump went after the players who were kneeling during the Anthem, calling them “sons of bitches” and calling on the league and/or the teams to fire or otherwise discipline players who don’t stand for the Anthem. While Trump’s tirade was received well by his supporters and by conservatives in general, it was not well received in the league or among the players. Responding to the President, the league, the NFL Players Association, and basically, all the team owners voiced support for the protesting players. Additionally, the weeks immediately after the President’s statement saw the kneeling protests expand as players of all races either knelt during the Anthem or engaged in some other form of showing solidarity with those players who chose to do so. It was during this period that Vice-President Pence walked out of an Indianapolis Colts game when some players knelt during the Anthem, in what was obviously a staged photo opportunity by the White House to further stir the pot. Several weeks later, the league announced that it would not discipline players who continued to kneel during the Anthem, and polling in both September and October showed that most Americans opposed the position taken by the President.

This brings us to the announcement in May of the new Anthem policy by the league, an announcement that didn’t seem to please anyone. Under the new policy, players would no longer be required to be on the field during the National Anthem, which had been the policy until roughly the 2006 season, but if they were they would be required to stand and could be subject to discipline if they did not stand. Alternatively, the league stated that teams or individual players could decide to remain off-field, either in the locker room or the tunnel underneath most N.F.L. stadiums from which the teams enter and leave the field, and act in whatever manner they chose as long as it was not disruptive. This caused President Trump to speak out and say that the new policy was insufficient, that players should not be excused from standing during the Anthem, and that anyone who refused to stand for the Anthem should leave the country. Shortly after this, the President canceled a visit by the Super Bowl Champion Eagles to the White House apparently due in part to the Anthem protest issue notwithstanding the fact that no Eagles player had kneeled during any regular season game in 2017. As had been the case during the earlier seasons, polling showed that most Americans opposed the President on this issue, but that Republicans strongly supported him.

Assuming that this suspension of the new policy remains in place when the season begins in six weeks, it would basically mean that the old policy, under which players were required to be on the field during the National Anthem, will be in place in its place. This likely means that we’ll see new kneeling protests and new efforts by the President to use this as an issue to rile up his base in the advance of the elections. As I’ve said before, it’s obvious that the purpose behind the President’s focus o this issue has nothing to do with the flag, the National Anthem, or the National Football League. Instead, Trump clearly recognizes this as an issue that he can use to energize his base and to stoke the racial fires that he was so obviously trying to stoke during his campaign for the Presidency. The fact that he’s making it clear that the N.F.L.’s attempt at a compromise will not be acceptable to him means, of course, that he fully intends on continuing to stoke the fires of this issue during the upcoming season. The fact that this will just happen to coincide with the midterm elections is, I’m sure, purely coincidental.