Downplaying earlier reports, the National Football League is shooting down reports that it would move to force players to stand for the National Anthem. 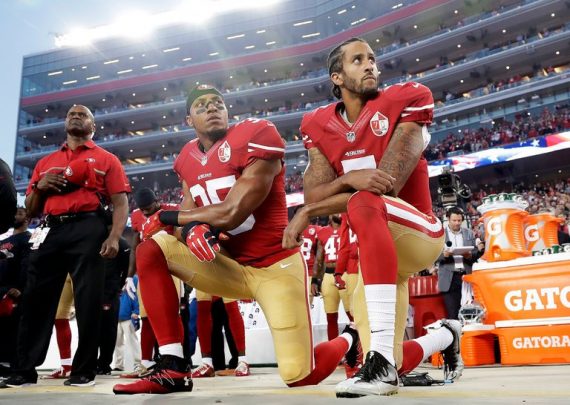 After weeks of controversy brought about largely by President Trump using the issue to rally his base, there has been some speculation that the National Football League would soon be changing its rules to require players to stand during the pre-game National Anthem, but the league shot those rumors down with an announcement late last week:

The NFL said Friday it has no plans to force players to stand during the national anthem, but will convene to discuss ways to end the controversial protests without imposing new rules.

NFL Commissioner Roger Goodell is set to meet with the head of the NFL Players Association and team owners in New York next week, where the protests are likely to dominate discussion.

NFL spokesman Joe Lockhart said that Goodell “has a plan that he is going to present to owners about how to use our platform to both raise awareness and make progress on issues of social justice and equality in this country,” according to Reuters.

The league pushed back on speculation about a possible vote on a proposal next week. The NFL previously said its meeting next week would allow owners a chance to review current policy, which encourages players to stand during the anthem but doesn’t make it mandatory.

The league released a joint statement with the NFL Players Association (NFLPA) earlier this week saying that they would work to advance the mission of the protests, which have called attention to issues of racial injustice and police brutality toward African-Americans.

“What we don’t have is a proposal that changes our policy, we don’t have something that mandates anything. That’s clear,” Lockhart added. “If that was the case I doubt the head of the NFLPA would have put a joint statement out with us.”

Goodell said in a previous statement on Tuesday that “everyone should stand for the National Anthem.” The commissioner said that while he respected the players and their concerns, the protests are a “barrier to having honest conversations and making real progress on the underlying issues.”

The announcement comes after a start to the new season that has been filled with controversy thanks largely to the fact that President Trump decided to resurrect the issue of players standing or not standing for the National Anthem during a speech in late August in Alabama where he referred to the protesting players as “sons of bitches.” In the wake of that speech, and notwithstanding the fact that Colin Kaepernick, the player who initiated the protests last season that had mostly faded away, is not even playing this reason, the issue was resurrected and players reacted to it beginning with the first games of the season when more players than ever before kneeled or engaged in some other silent show of solidarity, in many cases joined by team owners who spoke out in favor of their players. As the controversy continued, Trump seemingly egged it on by continuing to attack the players via his Twitter feed and calling for the league to fire players who are not standing for the Anthem. Most recently, the issue came back into public view last week when Vice-President Pence walked out of an Indianapolis Colts game when several of members of the opposing team chose to kneel during the anthem.

In the wake of all this renewed controversy, as well as reports that viewership for some N.F.L. games has been down so far this reason, there has been some speculation that the league and the owners would act to put an end to the controversy. The first sign that this might be a possibility came when Dallas Cowboys owner, who had previously joined his team in an act of solidarity in the first week of the season, suggested that players who declined to stand for the National Anthem in the future would be benched for some unspecified period. Early last week, meanwhile, it was reported that N.F.L. Commissioner Roger Goodell and league owners would be considering a rule change that would require players to stand for the Anthem or face some unspecified disciplinary consequences. This lead to blowback from players, many of whom had backed away from the protests that marked the beginning of the season, as well as the observation from outsiders that the league’s options in this area are likely limited given the terms of the current Collective Bargaining Agreement with the N.F.L. Player’s Association and general principles of labor law. With this announcement late last week, it would appear that, at least for now, the league will try to put this issue behind them, although that’s not going to be easy with the President of the United States seemingly ready to tweet about it at a moment’s notice.