Network News Dying: So What? NBC is the only network news program that’s not losing gobs of money, and that’s only because it has a 24/7 cable news outlet (MSNBC) to recoup its investment.   ABC and CBS are continuing to cut staff to pare costs but have no plan to actually make money, aside from hoping CNN will agree to merge with them for no apparent reason.

If any of this is news to you, NYT goes into this in some detail.

Network news divisions have historically been family jewels for their parent corporations, lending prestige and an aura of public service — as well as a shield against government intrusion. Mr. Heyward called the network evening newscasts a “bastion of serious news coverage at a time when so much of television has become tabloid and trivial.”

A survey by the Pew Research Center last year reported that three-quarters of respondents thought the cancellation of the evening newscasts would be an “important loss” to the country. Mr. Rosenstiel said, “None of these news division presidents wants to be the first guy to kill an evening newscast.”

Look, I think it’s important to be in good shape, too, but that doesn’t mean I’m going to quit sitting on the couch drinking beer.  People are theoretically in favor of a lot of things that are supposed to be good for them — broccoli, C-SPAN, classical music, exercise — but that doesn’t mean they’re actually going to choose them over more hedonistic alternatives.

Furthermore, those of us who are news junkies have plenty of choices, too.  If I really wanted to watch someone read me the news, I’d pick Jim Lehrer.  Since I don’t, I choose the internets.
Still, the networks persist in trying to save a loss leader that few really want:

Mr. Westin said ABC News could no longer afford to support a worldwide staff of about 1,500, with bureaus in cities foreign and domestic, most with traditional TV news work forces: camera operators, sound engineers, tape editors, assignment editors and, of course, correspondents, many with substantial salaries.

More journalists will become jacks-of-all-trades, wielding cameras, microphones and lights, as well as lists of interview questions. More production work will be conducted out of New York. “The ones who fear the most from the cuts are the ones that have a single function,” one ABC staff member said.

Mr. Westin said high-priced and purely cosmetic talent would become an increasingly endangered species. “There have been people in television news — very successful people — who do not write,” he said. “We are going to definitely require more of our journalists.”

Mr. Westin said he did not think the cuts would compromise ABC’s journalism, but not everyone shares his confidence. One veteran ABC News executive said, “Clearly the signal is: It’s not important to create anything new. We simply have to figure out a way to manage it cheaply.”

Or, how about this:  Cancel the show.  That’s what you’d do with any other show whose ratings were flagging and whose production costs exceeded the ability to sell advertising over a long period.

Oh, but nightly newscasts bring prestige!  Really?  Does Katie Couric really have the same gravitas that Walter Cronkite — or even Dan Rather — carried?  Ditto whoever’s currently doing the news for ABC and NBC vs. David Brinkley and John Chancellor?  No.   And it’s not that the new gang isn’t talented and competent.   Or even that they haven’t come up as war correspondents.   No, it’s simply that they’re not in our living rooms every night and therefore don’t have the cultural impact that their antecedents of even twenty years ago did.

And they never will again.

So, get over it.  Focus instead on, oh, entertaining programming.  Because you’re about to be obsolete in that department, too, with USA, SyFy, and HBO making the best shows on television. 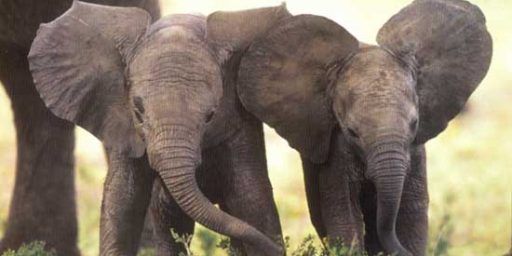