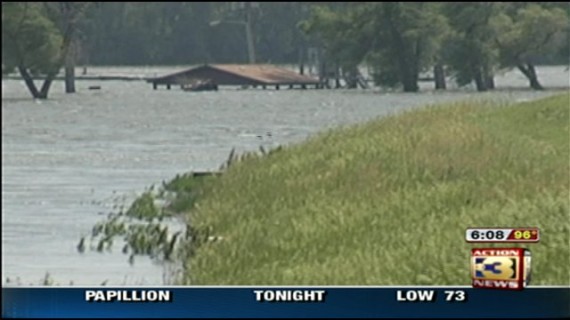 The Papio-Missouri River Natural Resource District is working hard to build a levee to protect an 18-mile stretch along the Missouri River and Papio Creek by Haworth Park. Beyond the levee are homes, major businesses and Offutt Air Force Base.

“The potential for those levees breaching is certainly there,” said Marlin Petermann with Papio-Missouri River Natural Resources District.

The most immediate threats are to Offutt Air Force Base, Stratcom, Papillion Creek Waste Water Treatment Plant, a concrete plant and the Salvation Army summer camp, “These areas would have to be evacuated if the levee is breached,” said Petermann.

The NRD is already inspecting it’s levees along the Missouri River and Papio Creek twice a day. Soon they could have someone out there around the clock. Petermann says they’ve done all they can to prevent the flooding, “We haven’t found any weak areas. The levee is in good condition,” said Petermann.

The question is, will the levees be strong enough to withstand major amounts of flood water through the entire summer and then some? “Here we’re talking months and that sustained period of water up against a levee very high within a couple feet at the top will be substantial test on the levee system,” said Petermann.

It’s amazing that, despite a trillion dollar defense budget, our best recourse against flooding–a danger not of recent origin–has not advanced beyond deploying fat old men with sandbags and hoping for the best.