Lucy Kellaway figures the best thing we middle agers can do for the young is to get the hell out of their way.

FT management columnist Lucy Kellaway, who’s just a few years older than me, figures the best thing we middle agers can do for the young is to get the hell out of their way.

This inescapable, awkward truth has been rammed home to me in the past few months as I keep meeting bright people in their 20s and 30s desperate for a job in journalism – and for mine in particular. I fob them off with platitudes about what a difficult market journalism is, but no one is fooled. The real reason they can’t do my job is that I’m doing it myself.

The same is true for almost all professions. The young can’t advance because everywhere they find my complacent generation is in situ. Thus the only way of solving the problem is to make everyone of a certain age, say over 50, walk the plank.

Before I go any further, I ought to make one thing clear. This is not a resignation letter – I intend to hang on for dear life. It is just that I can’t resist pointing out the obvious, even though it is not in my interests to do so. Forcibly breaking the logjam would not only do much for youth unemployment, it would also serve a lot of other ends.

The choice boils down to whether it’s better for people to have a decade at the beginning or at the end of their careers where they are demoralised and underemployed. The answer is easy: surely it is better to be more active at the beginning.

To have people idle at a time when they are full of energy and their grey-cell count is at a maximum is a shocking waste. And in any case, my generation has had it very good for much too long. We bought houses when they were still just about affordable. We had free education and pensions. It’s all been jolly nice, and I’ve enjoyed it a lot. Now is the time to start to pay.

One of the beauties of the young is that they are cheap. Shifting from old to young would bring down wages and would also solve the executive pay problem in one shot. Almost all the people earning grotesque amounts are over 50 – getting rid of them would mean CEO pay would come thumping down.

Now, this is presumably at least a bit tongue-in-cheek. But there’s quite a bit of truth here. To be sure, with age comes experience. But there comes a point at which the experience tends to calcify and, combined with a diminution of energy and enthusiasm, leads to diminishing returns.

Of course, the ideal solution would be to figure out a way to keep the middle- and past-middle-aged folks gainfully employed while also hiring the shiny youngsters. 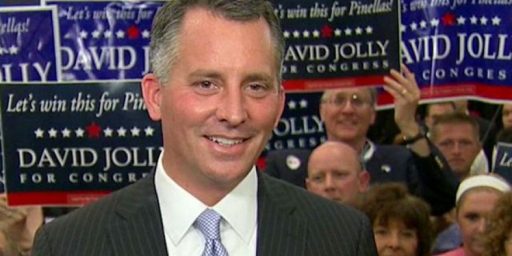 Does A GOP Win In FL-13 Mean Anything?