Our Con Man in Iraq 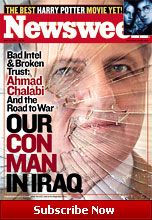 The Rise and Fall of Chalabi: Bush’s Mr. Wrong

For the hard-liners at the Defense Department, the raid came as a surprise. Secretary of Defense Donald Rumsfeld and his senior deputies, Paul Wolfowitz and Douglas Feith, got the news from the media. When Iraqi police, guarded by American GIs, burst into the home and offices of Ahmad Chalabi and his Iraqi National Congress, looking for evidence of kidnapping, embezzlement, torture and theft, the men who run the Pentagon were left asking some uncomfortable questions. “Who signed off on this raid?” wondered one very high-ranking official. “What were U.S. soldiers doing there?” asked another, according to a source who was present in the room.

I can understand prison abuses not filtering up to OSD level in a timely manner. But how in the world does what amounts to a major policy swing take place without input from the highest levels? Apparently, the infamous Rumsfeld-Bremer feud is the answer:

Until at least very recently, Chalabi had been the darling of these top Pentagon officials. How could it be that the men who run the most powerful military in the world could not know that their own troops were about to run a raid on a man once regarded as the hope of free Iraq? Just last January, Chalabi had been seated behind First Lady Laura Bush at the State of the Union Message. Now, according to intelligence officials, he is under investigation by the United States for leaking damaging secrets to the government of Iran.

A civil war simmered in Iraq last week, not between Sunnis and Shiites, but between American government officials. On the one side are the neoconservatives inside the Pentagon and the Bush administration who backed Chalabi as a freedom fighter; on the other are the spooks and diplomats who have long distrusted the former Iraqi exile with a taste for well-cut suits. The neocons, who once swaggered, seem to be slipping, losing confidence and clout. It is telling that the ground commanders in Baghdad who participated in the raid on Chalabi headquarters did not bother to inform their chain-of-command higher-ups at the Pentagon. (The raid was apparently OK’d by the American proconsul in Baghdad, Paul Bremer, probably with tacit approval of White House officials.) Embarrassed by horrific images from Abu Ghraib, a growing number of uniformed soldiers are blaming their political bosses in WashingtonÃ¢€”Rumsfeld, Wolfowitz and FeithÃ¢€”for whatever goes wrong in Iraq.

Americans may be beginning to wonder: is anyone in charge over there? For an administration that prides itself on clarity of leadership, the Bushies seem to be lost in the Mesopotamian sandstorm. Everyone and no one was responsible for the prisoner-abuse scandal; the deadline for turning over the country to a new government is five weeks away, and the outcome is highly uncertain. Chalabi, who was supposed to be Our Man in Baghdad, is now whipping up anti-American sentiment. It wasn’t long ago that Chalabi was touted as a great democrat, a friend of Israel, an Arab who “thought like us.” He was going to help Americans reshape the troubled Middle East in our own image. But just as Chalabi once seemed to personify the utopian dreams of the true believersÃ¢€”remember those bouquets that would greet the troops?Ã¢€”his fall from grace suggests a more depressing turn in the Iraq reality show.

Chalabi should not be a scapegoat for all that ails the American occupation of Iraq. When it served their own ideological agenda, his neocon sponsors engaged in a willing suspension of disbelief. The ideologues at the Defense Department were warned by doubters at the State Department and CIA that Chalabi was peddling suspect goods. Even so, the Bushies were bamboozled by a Machiavellian con man for the ages. Chalabi (who vigorously denies wrongdoing and has donned a martyr’s robes) has survived a fraud conviction, betrayals and scandals before. He may yet emerge on top. His story would be darkly entertaining, even funny after the fashion of a late John le Carre novel, if the consequences were not so serious.

Ahmad Chalabi on the Brink of a Comeback